The dissolution of the 'A2-B-C' Screening Committee in Japan was announced this evening (LINK).

This is not the end, it is simply an opportunity to begin again.

I thank you all for your encouragement and ask for your continued support. 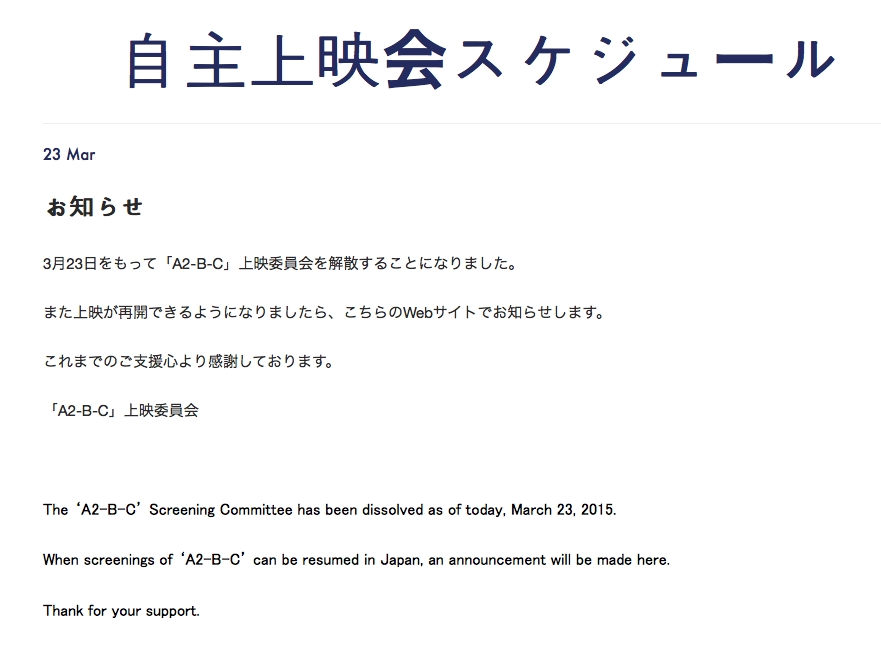 DVD or Internet Release of 'A2-B-C' not possible

Although I have posted the following as a comment in several places, I feel the need to post it here as well.

People have messaged me asking if I can upload 'A2-B-C' (WEBSITE) to the internet in order to bypass the distribution system here in Japan, but there is a very important reason why that is not possible: I made an agreement with the families who appeared in the film that I would not upload it to the internet and that a DVD of the film would not be released in Japan. This was to protect them as much as possible from becoming the targets of harsh criticism for having spoken out in a country where, as the expression goes, "the nail that sticks up gets hammered down."

One of the main reasons I decided to sign with a distributor in the first place was to strengthen my ability to keep these promises that I had made with the families. As an individual it would have been difficult for me to prevent someone from uploading the film to the internet or selling pirated DVDs, but this became easier to control with the resources of a distributor.

Despite not being able to sell DVDs or release the film on the internet, typically two of the main sources of income for a distributor, they had agreed to take on 'A2-B-C' through an agreement with the 'A2-B-C' Screening Committee. The film had a theatrical release in cinemas across Japan which was then followed by dozens of private screenings organized by small groups, organizations and NPOs. Importantly, these private screenings provided a significant revenue source for the distributor, which served as an incentive to help keep the film off of the internet, thereby protecting the families to a greater degree.

Although some people may not see the difference between screening a film publicly and having it available online, releasing the film online would expose the families to even more harsh criticism than they are already experiencing and could lead to a very real concern for their safety. Despite the fact that 'A2-B-C' has only ever been available to watch in cinemas and privately organized screenings, the mothers in the film have already been the recipients of cruel bashing and internet bullying by often anonymous attackers.

One example of the outrageous attacks being made on the mothers who had spoken out about their concerns for the health and safety of their children was an article that attempted to discredit them and accused me of making the film for the express purpose of inciting discrimination against the people of Fukushima (I first wrote about this article HERE). 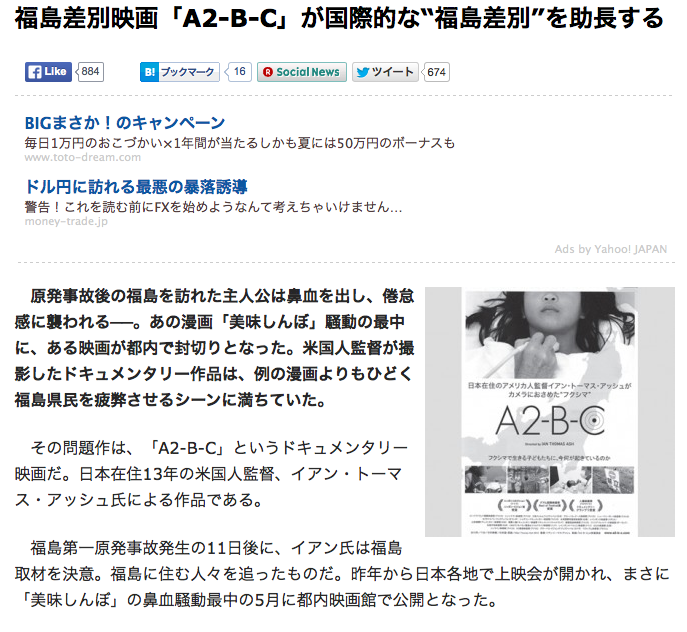 Did you receive my recent email? I'm sorry to hear about the resistance you are encountering in Japan, but we would still like to show your film in NYC. If that could happen in May or thereafter, please let us know.