Selling out in Sydney

With the screening in last week's Queer Screen Mardi Gras Film Festival (INFO), "Boys for Sale" (WEBSITE) has now screened on six continents... with just Antarctica now remaining.  And thanks to travel support from the Japan Foundation of Sydney, I was honoured to be able to attend the screening, which also marked my first time in Australia.
Qscreen Mardi Gras FFでの上映完売について、 国際交流基金のサポートを受けられたことを光栄に思います‬。
Between attending screenings at the festival and doing a bit of PR, there was not time for too much sight-seeing, but I did make it to the harbour briefly for the must-have photo in front of the Opera House.  I also spent time at the local cinema where I saw films that will not be released in Japan for months, including "Call Me By Your Name" and "Lady Bird". 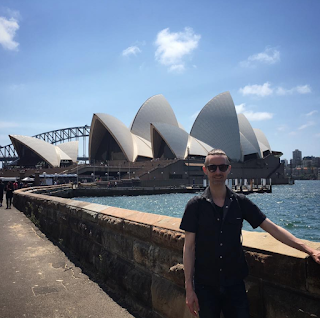 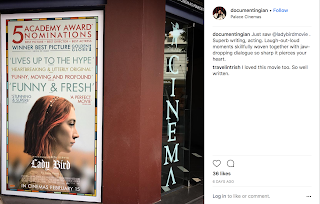 One of the highlights of attending festivals is getting to meet other filmmakers, some of whom I have met before while traveling on the circuit, like Craig Boreham, director of "Teenage Kicks" whom I met last summer at Oufest in Los Angeles (INFO).
The festival audiences were amazing, enthusiastic and out in full force, and despite having already been moved into a bigger cinema, "Boys for Sale" SOLD OUT all 346 seats the day before our screening!  As always, the post-screening Q&A felt too short, but aside from a question from a sex-worker advocate with an agenda, it went really well and the audience asked great questions and had clearly engaged with the film. 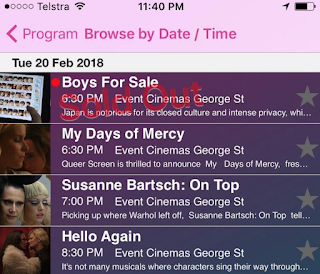 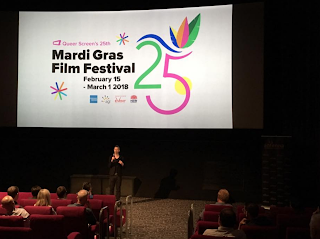 UPDATE:  My conversation with Elevan Cooper for his Elevan O’Clock podcast has been published.  Elevan skillfully disarmed me to the point that I appear to have mistaken the interview for a session with a therapist.  Listen HERE for more about my personal life than most viewers of my documentaries ever wanted to know or I ever intended to share, LOL. 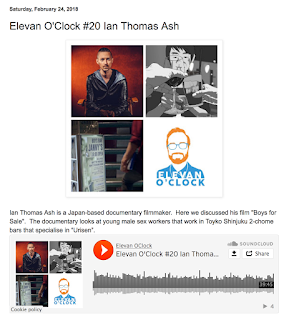 Posted by Ian Thomas Ash at 9:37 pm No comments:

I am extremely honoured to announce that "Boys for Sale" (WEBSITE) received the award for Best LGBTQ Feature at the Oxford Film Festival in Mississippi last night! 「売買ボーイズ」がOxford映画祭でLGBTQ長編最優秀賞を受賞！ 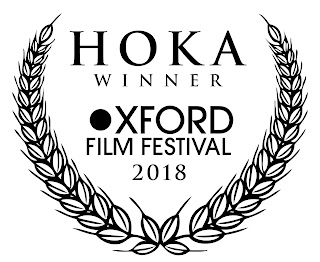 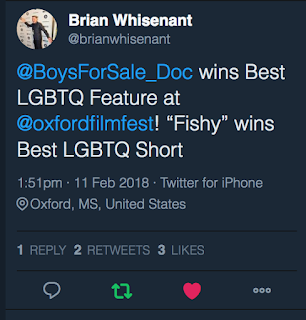 Ahead of the opening of the festival, Brian Whisenant, head programmer for the LGBTQ+ category, was quoted in THIS DM Online article about the festival which is held in Mississippi:

“Oxford Film Festival has always shown LGBTQ films, but (festival director) Melanie Addington and I believe that highlighting the community and giving it its own section shows our town and the film community at large that we are not our state’s legislative bigotry."

I had really been looking forward to attending this awesome festival, where "Boys for Sale" was screening twice (INFO) and where I had received the additional privilege of being asked to participate in the Queer Filmmaking Panel tomorrow during which "Filmmakers/actors discuss the challenges, advantages of queer filmmaking as well as the state of LGBTQ cinema in today's climate" (INFO).  Unfortunately, due to deadlines on some upcoming projects (more exciting news on those soon!), I had to cancel plans to attend at the last minute.


This is the 5th award "Boys for Sale" has received, in addition to THESE four.  On behalf of the entire "Boys for Sale" team, we are truly humbled by the amazing reception the film has received.  Thank you all so much for your support! これまでの4つの賞（こちら）に加え、これで5つ目の賞です。皆さんありがとうございます！