"Don't abandon the children of Fukushima" (part 5 of 5)

Today was my last day in Fuskushima for this trip, and I had asked the Sugano family if I could film their three children (son Koutarou, 9, daughter Kae, 5, and youngest son Shinjirou, 4) getting ready for school.

Koutarou, who leaves for school the earliest, was up before six.  He had breakfast and got dressed in his school uniform, which includes a radiation monitor on a blue lanyard around his neck.  While his younger brother and sister still slept, Koutarou got in a few more minutes of morning cartoons before leaving for school.


A little after seven, Koutarou put on a protective face mask and headed to Oguni Elementary School in Date City (the elementary school with the radioactive hotspot that I wrote about yesterday).


After Koutarou left for school, Kae, 5, and Shinjirou, 4, woke up and immediately starting playing computer games.  Earlier in the week I had wondered why so many of the children I met seemed to be obsessively playing video games.  And then it dawned on me: the children are not allowed to play outside.


Kae and Shinjirou had breakfast and got dressed in their matching school uniforms, which also include a radiation monitor on a blue lanyard.  The children are too small to wear the radiation monitors around their necks so they are attached to their school back backs.  Kae and Shinjirou then headed out to the bus that takes them to their nursery school, which is also in the contaminated area of Oguni in Date City, Fukushima.

In the afternoon, I visited the home of Mr. and Mrs. Shibuya.  They were living with their two children, son Aibu, 12, and daughter Mutsuki, 9, in the Watari district of Fukushima City when the nuclear power plant melted down last year.  They were able to evacuate their children to Mrs. Shibuya's parents' house, where the radiation level is slightly lower than where they were living in Watari, although the home is still within the limits of the city of Fukushima.

Mr. Shibuya proudly showed me a photo of his family at an anti-nuclear demonstration in Tokyo last year.  They are holding a banner his daughter, Mutsuki, drew depicting little children wearing face-masks, and that reads: "Don't abandon the children of Fukushima!".  The banner now hangs in the family's home.

I asked Mr. and Mrs. Shibuya if the children had undergone testing for both internal radiation exposure and thyroid abnormalities.  Mrs. Shibuya's eyes welled up with tears as Mr. Shibuya showed me the test results from the children's thyroid exams.  Both Aibu and Mutsuki have been diagnosed with abnormal thyroid cysts. 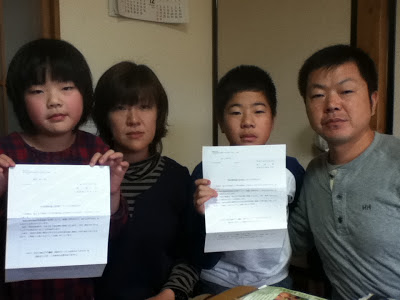 Aibu and Mutsuki are just two of the 43% of children in Fukushima that have been found to have abnormal thyroid cysts.  What will this mean for Aibu, Mutsuki, and the rest of the children of Fukushima?