The "Voluntary Evacuees" of Fukushima

I was honoured to be asked by the Foreign Correspondents' Club of Japan (FCCJ website HERE) to MC today's press conference "Fukushima Voluntary Evacuees on Verge of Losing Homes" (press release HERE).  Noriko Matsumoto, Hidetake Ishimaru and Chia Yoshida spoke about what is referred to as the "March 2017 Problem”, when the government will end support to people they deem to have "voluntarily evacuated" from contaminated areas of Fukushima; this would in effect force those who can not afford to remain evacuated on their own to return to areas many feel are unsafe. 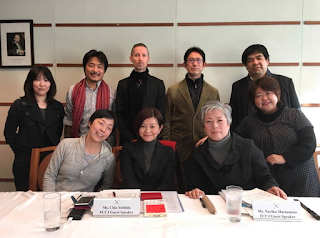 
The archived video of the press conference has been published on the FCCJ YouTube page:

***** END UPDATES *****
The press conference was live-streamed (and will be posted to the FCCJ YouTube channel HERE tomorrow).  As I have done in the past (and as I did when Timothy Mousseau, Professor of Biological Sciences, University of South Carolina, gave a press conference entitled "Fukushima Catastrophe and its Effects on Wildlife" HERE), in addition to MC'ing, I also live-Tweeted the press conference (screen grabs below) from my @DocumentingIan account. 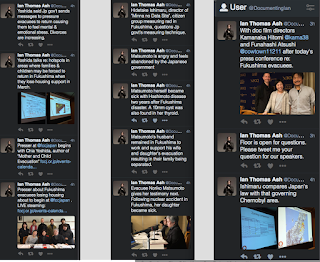 Hidetake Ishimaru, director of "Minna no Data Site", a citizen's radiation measuring station, presented documents comparing the government policies regarding Fukushima and Chernobyl radiation levels.  After his speech, I wanted to make sure that a very central point was not being lost on those in attendance, and I felt the need to bring it up before the Q&A: the phrase "voluntary evacuee", which has the connotation that people have chosen to evacuate unnecessarily and with the added implication that they are simply "worrying too much" is being used to describe people who have decided they must evacuate their children from contaminated areas on their own because they live outside the official evacuation zone.

After the Fukushima nuclear disaster, the government arbitrarily created the evacuation zones, I believe making them as small as possible in an effort to pay compensation to as few people as possible.  The government then deemed anyone living outside of these zones who evacuated on their own as having "voluntarily evacuated".  This is despite the fact it has been proven that the radiation did not (and does not) spread in neat, concentric circles stopping at government-determined zones.  Proof of this lies in the fact that there have been countless incidents where radiation levels many times higher than those inside the evacuation zone have been found outside of it.  Using the word "voluntary", implying that they somehow have a choice, to refer to evacuees from these contaminated areas is nothing short of secondary victimization.

During the Q&A, a journalist in attendance carried this discussion further, asking if there was not some way other than "voluntary evacuee" to refer to this group of people.  Author Chia Yoshida, one of the panelists, stated that one official way they can be referred to is as "people from outside the official evacuation zone who have evacuated", but that such phrasing is awkward and long. 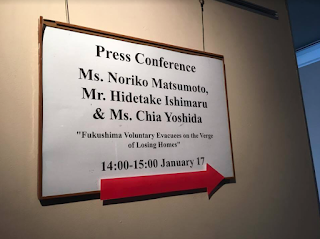 With problems as deep and complex as are happening in Fukushima, issues of language and translation often occur.  Part way through the presser, I realized there were some problems with the English interpretation.  During the Q&A, some important words in an answer from Mrs. Noriko Matsumoto, an evacuee from Fukushima, had been omitted in the interpretation, lessening the impact of her statement.  Wanting to make sure that Mrs. Matsumoto's courage in sharing her story was not missed by the non-Japanese-speaking attendees, I broke decorum and corrected the translator.   Mrs. Matsumoto had given a very emotional account of Fukushima children being bullied at their new school.  When parents complained to administrators, they were told "you made the choice to evacuate- if your children are being bullied, that's your fault" (the unlined/ bold words had been inadvertently omitted by the translator).   Mrs. Matsumoto's account showed that it is not only children being bullied, but adults as well; in addition to the physical threat of exposure to radiation, evacuees are also facing emotional and psychological trauma. 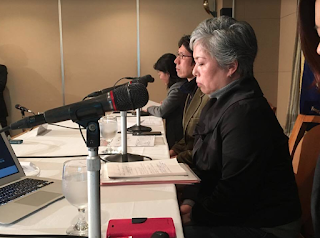 Following the press conference, I had the opportunity to speak with documentary directors Kamanaka Hitomi (with whom I published THIS VIDEO and article for the Japan Times in 2015) and Atsushi Funahashi (whom I had first met at Cultural Typhoon in 2013 HERE).  Both of these filmmakers have filmed extensively in Fukushima and were supporting today's panelists. 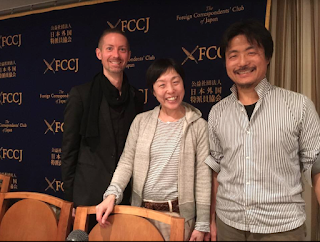