The beginning of 2018 brought to an end for me the year following the inauspicious year of the age of 42, a 3-year period which includes both the year leading into and out of it (more on that in THIS Japan Times article), but which starts counting from birth at 1, rather than 0, so you are actually one year older by this counting system.  It is a bit complicated and also depends on where you live in Japan, but the take away is, the unlucky period for me is over.  ;)  And NOT to challenge the fates, but if that was my "unlucky period", then all I can say is that I have nothing but gratitude for these last few years, and I look forward to the coming ones. 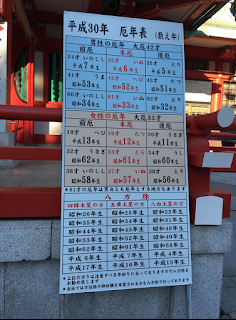 January has been a wonderful start to the New Year.  Looking at my social media over the last few weeks it seems like it has been a slow start, but I am editing a couple of projects in the background.  And already there have been some great things going on!

3 MORE YEARS
On January 16, I went to my lawyer's office to pick up my brand new 3-year visa.  I was so grateful (and relieved) after having consistently received only one-year visas since 2013 (and having to reapply every year).

Boys for Sale music score in the Top 10

On January 19, blogger Noah Franc, who writes about Japanese cinema, published his list of "Top Ten Film Scores of 2017" for Japanese film on his "Oh Cinema" blog (LINK).  The soundtrack for "Boys for Sale" (WEBSITE), composed by the musicians known as Kazaguruma (with Jack on shamisen and Komitetsu on cello) who worked closely with director Itako, came in at number 7.
「売買ボーイズ」の音楽が、ブロガーNoah Francさんの２０１７年映画音楽トップ１０に選ばれたよ！チームのみんな、特に作曲グループ「かざぐるま」の寂空 on 三味線と  こみてつ on チェロへおめでとう！

This unforgettable film about a little-known part of the Japanese sex trade also happens to have some of the most interesting original music scores of the year as well. Featuring a band playing an assortment of Japanese instruments, the makers of the film made the unusual choice of mixing together the actual written score with the musician’s improvisational warm-up recordings. While the band was understandably apprehensive about this, they needn’t have worried, because the end result was a remarkably fitting sound unlike anything else I heard all year. 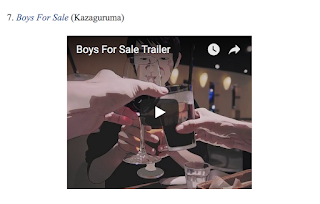 "Boys for Sale" started on the film festival circuit last May and is still going strong!  Upcoming screenings include the Mississippi Premier in the 2018 Oxford Film Festival (Feb 7-11) where it will screen on February 9 & 10 (LINK) as well as the Australian Premier in the 2018 Queer Screen’s Mardi Gras FF (Feb 15-March 1 in Sydney) where it screens February 20 at 18:30 (LINK).  Screenings still under embargo include TWO screenings on the West Coast (USA), another one in Australia and our Swiss premier!  More info on those as it becomes available on the Screenings page of the film (HERE).

Thank you all so much for your continued support an encouragement!
Much Peace to you all in 2018,
Ian
Tokyo, Japan
Posted by Ian Thomas Ash at 10:25 pm