Into the mouths of babes: feeding controversy

I am back in Fukushima this week.

I have been contacted by more parents who have discovered that their children have thyroid cysts and nodules;  I have been sent more results of the Fukushima Health Management Survey, that while public, don't seem to make the news; and I am more than ever filled with many questions and few answers.

Every time I think I am beginning to understand one part of this complicated problem, I realize just how much I still do not know; it seems that for each piece of the puzzle that is revealed to me, I realize that there are a hundred more gathered in the shadows.

A few days ago Mr. and Mrs. Shibuya called me and asked if I could meet them out of a drink.  I have met the Shibuya's several times since I first met them a couple of months ago, but I had always seen them at their home with their children.  This time they were going to leave their two children, son Ayumu, 12, and daughter Mutsuki, 12, with their grandparents and come out to meet me.  It seemed that they had some news that they couldn't talk about in front of the children.

When I met the Shibuya family two months ago (here and here), they shared with me that both their son Ayumu, 12, and daughter Mutsuki, 9, have thyroid cysts. 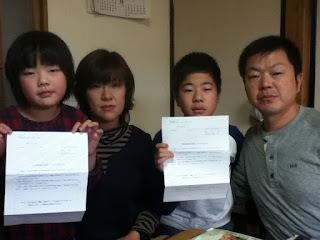 The Shibuya children's results of the official Health Survey revealed only that their cysts are class A2, that is "less than 20mm in size".  However, the results do state how big the cysts are within that range, nor how many cysts there are.  If there is one cyst that is 1mm, that is a very different problem than having multiple cysts that are 19mm.

I met the Shibuya's tonight as soon as I arrived in Fukushima.  They took me to a local restaurant where a feast of local delicacies had been prepared.  It was good to be together in a casual setting rather than in a formal interview.  We had great food and delicious beer... it was almost "normal", save for the conservation which centered around the radioactive contamination of the local area and the discovery of more and more children with thyroid cysts and nodules. 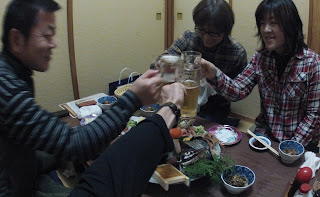 One of the most pressing issues that the Shibuya's wanted to talk about is the move by the city of Fukushima to return to using locally grown rice in the school lunches.  The issue affects most elementary and middle school children since taking school lunch is mandatory in most schools in Japan.  It is highly unusual for students to be permitted to "opt-out" of eating the school lunch and those that are are often ostrozized for eating something different, and therefore "being different", one of the worst things you can be in this island nation.  As they say, "the nail that sticks out gets hammered down."  Even Mr. and Mrs. Shibuya have felt ostrocized by some parents of their children's classmates for being "too vocal" with their concerns about the effects of radiation on their children.

But Mr. Shibuya's concern lies in something far more sinister: he believes that the government is trying to use the issue of putting locally-grown rice in the children's school lunches as a way to gain the public's trust.  He believes that if the government succeeds in its push to use local rice in the school lunches that it will open the door to using more banned products, to the re-instating of banned outdoor activities and to the opening up of more land that has been, until now, been deemed off limits due to radioactive contamination.

What could the government possibly gain from doing this?  Each product the government deems safe for consumption represents less compensation they must provide and increased tax revenue through sales.  Each piece of land deemed "de-dontaminated" represents more people that can be effectively forced to return to their homes by withdrawing compensation.

Thank you for your hard work and documenting this. There are reports that Fukushima rice is already being used in bentos, and in Family Restaurant meals. Transparency and honesty are the only things that are going to ever win the public's trust. When will the government here listen to their citizens, rather than industry?

Yes, the rice is being used in school lunches from this month.

"When will the government here listen to their citizens, rather than industry?"

Sadly, I suppose it won't be until people are seen as being worth more than money.

Thanks, Ian, for your work! I'm living in Germany, but there's no place in this world which is away far enough not to feel concerned about what is going on in Japan, especially Fukushima.
Although (or because) my partner works for the Japanese gouvernment it's difficult to get some reliable information about the people behind the numbers.
Please go on with your work and spread it!