Play until you cry

My day began at the Fukushima Collaborative Clinic (website), an independently-run private hospital that provides services such as screening children's thyroids for cysts and nodules.  I interviewed Mrs. Shina, one of the founding members and spokesperson for the hospital.

Mrs. Shina explained that one of the most sought after services that they provide are "thyroid screening second opinions" since so many Fukushima parents do not trust the results of the health survey overseen by the government.   The appointments for such screenings are fully booked until May of next year (!).

Parents have shared with me stories about doctors who vehemently deny ANY possibility of a connection between thyroid cysts and the nuclear meltdown; about being denied access to second opinions at university hospitals; about getting second opinions at hospitals outside of Fukushima and finding out their children have more and bigger thyroid cysts than were revealed in the official exam. 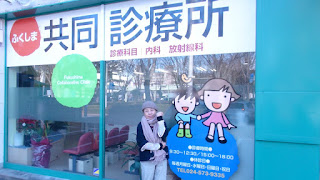 Next, I visited "Smile Park in Fukushima", a traveling event created by the Japanese Red Cross Society (event website HERE, Japanese Red Cross Society website HERE).  The event is brought to cities around Fukshima and provides a safe place indoors for children to play since outdoor activities are limited due to concerns about radiation.  I have been struck by how every time I meet a child in Fukushima, he or she seems to have their head in a portable game (which I wrote about HERE in "Trapped Inside").  I quickly learned the reason is because they aren't allowed to play outside.

I was shown around "Smile Park" by Ms. Tomita, a Red Cross staff member. 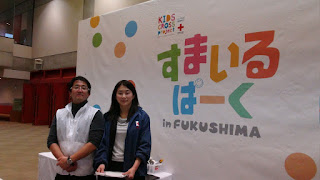 Even though many schools and playgrounds have been "decontaminated", the surrounding mountains and land have not.  Parents are worried about their children playing outside as it has already been documented that because of wind, rain and other factors, the radiation levels in areas that had been previously deemed "decontaminated" are already beginning to rise again.

Ms. Tomita allowed me to run, jump and play on the equipment with the children and it was a beautiful, fun and rare time when I was able to forget, just for a moment, why I was there and why this event had been created.

I stepped back to take a long shot of the entire event, the sound of hundreds of children laughing echoing through the hall.  Suddenly, I was overcome with emotion and began to sob.  At first I couldn't understand why I was crying and had to excuse myself to go outside and recover.

When I returned to the hall, I apologized to Ms. Tomita for my emotion.  I explained to her that it had just suddenly hit me why the event existed: these children cannot play outside, cannot live their lives as children normally do, and with that realization I had been unable to stop my tears (just thinking about it now as I write this I am crying).  Ms. Tomita leaned in close to me and whispered, "it happens to a lot of people who come here". 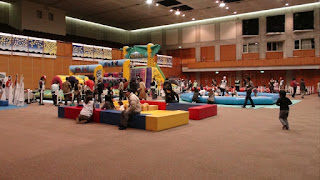 Your work is extremely important and will become even more so as Ishihara Nobuteru takes control of the Environment Ministry and nuclear energy. We can expect nothing but a continued avalanche of lies and obfuscation for the foreseeable future. The health of these children is at the bottom of the LDP cabinet's concerns.

Thank you for your support and for leaving your comment. It is becoming harder and harder to see a way out of this, and so we must remain aware and keep others informed.

hi ian
you are a very wonderful person..
imo
thank you so much for covering the human impact side of this story..

its on enenews now and i will post this and links to your other diary entries on www.nuclear-news.net

it will be posted there soon..
hope its ok to reblog?
i did repost the others too..
hope that was ok?

if their is a copy right issue contact me on

if there is anything we can do at nuclear news-news to get the word out or support your efforts, please feel free to ask..

as to the blog
heartbreaking, children shouldnt have to deal with industrial accidents.. you would think that was a no brainer?

cant wait to seee the UN`s final report on the issues on living with contamnation.. we will find out just cold hearted the Main stream media really are..

but the alternative media is ready and waiting

you really are an oasis in the desert..

Thank you so much for your kind words and most of all for letting people know about the continuing tragedy. I am honored to have you re-post my findings; the reason for doing this work is simply to let people know what is actually happening to people in Fukushima right now. Thank you for helping me do that and for all of the work that you do.