Thanks to the help and encouragement of you--- my friends, family and supporters--- 2013 has been an incredible journey.  Here's a look back at some of this year's amazing moments that you made possible, starting with this month:

In addition to 'A2-B-C' screening HERE in Taiwan and in THIS Japan domestic tour, I was extremely honoured to receive these recognitions:
'A2-B-C' was included in Third Window Films' Top 10 Japanese Films of 2013 (INFO)! 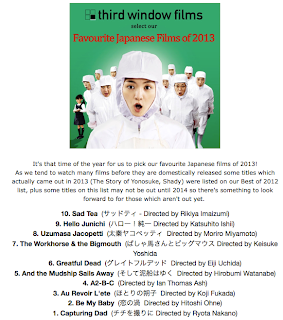 In a Sydney Review of Books article about Mark Willacy's Fukushima: Japan’s Tsunami and the Inside Story of the Nuclear Meltdowns, journalist Julian Littler included a section on 'A2-B-C' (ARTICLE). 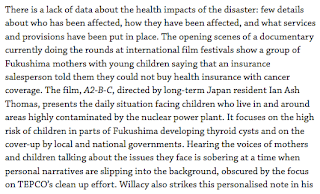 In the not-so-distant past, there has been some debate about the nationality of the films that I make; although my films are made in Japan in Japanese and with Japanese money, there have been people who have insisted that my films are not Japanese simply because I'm not.

But this year, I feel my work has finally been recognized for what it is: I was the first non-Japanese person to be honoured with the Nippons Visions Awards (resulting in the qualification to receive the award being changed to "Japan-based director"); when 'A2-B-C' was screened in London's Raindance, it was programmed in the Way Out East strand of Japanese films (INFO), the only Japanese film directed by a non-Japanese director; and when 'A2-B-C' recently toured domestically in Japan with the other Japanese films in the PIA Film Festival, I was treated just like one of the other Japanese directors (info HERE), even if the photo (below) reminds me of THIS song from Sesame Street (!). 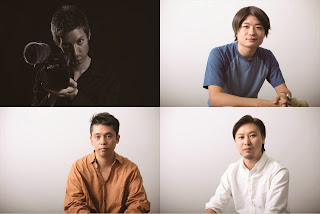 And here's how it all began:


JANUARY 2013
While wrapping up filming on what would eventually become 'A2-B-C', I received THIS award for my first film about Fukushima, 'In the Grey Zone'.

FEBRUARY 2013
I showed the "rough cut" of the film to the Fukushima mothers who appear in it.  THIS is how they responded.

MARCH 2013
For the 2nd anniverary of the March 11, 2011 disaster, I posted THIS look back on how my journey documenting this disaster began.

APRIL 2013
Even before "locking picture" on 'A2-B-C', I was back in Fukushima where I filed THIS series of stories.

MAY 2013
Prior to the World Premier of 'A2-B-C', I had the great honour of holding THIS press screening in Tokyo.  I also took THESE widely-seen photos at an anti-nuclear demonstration in the capital.

JUNE 2013
At the World Premier of 'A2-B-C' in Germany, the film won THIS award.  I also published THIS video of heart-felt messages to the mothers who appear in the film.

JULY 2013
'A2-B-C' was screened at THIS academic conference in Tokyo, the first of many educational uses of the film.  Also, THIS portrait, which captured and helped define a new beginning for me, was taken.

AUGUST 2013
The North American premier of 'A2-B-C' was held and the UK Premier, Japan Premier and many others were confirmed.  I was also interviewed for THIS program on the BBC.

SEPTEMBER 2013
The day after the Japan premier of 'A2-B-C' in THIS festival, I embarked on what would eventually be a nearly 4-month World Tour beginning with THESE cities.  The film was awarded THIS honour.

OCTOBER 2013
No time for jet-lag between THIS screening in London, THIS one in Japan, and then THIS one in California.

NOVEMBER 2013
The tour continued with THIS screening in Poland, the film was AWARDED in the Ukraine, and I visited the Chernobyl museum HERE.  After screening for the first time in Fukushima HERE, I met with resistance HERE and wrote about the controversial Secrecy Law HERE.

Thank you all so very much for your help and encouragement over the past year.  I ask for your continued support over the next year and beyond.

In Peace and with Much Gratitude,
Ian
Posted by Ian Thomas Ash at 10:16 am