Preparations for the cinema release of 'A2-B-C' in Japan (INFO) are progressing, including the recent launch of the Japanese-language website (HERE 日本語).  So far, it has been confirmed that the film will be screening in Tokyo, Nagoya and Osaka, and other cities are expected to follow (INFO 日本語).

The film will open in Tokyo on May 10 and screen twice a day for three weeks.  Following each screening on the opening day, I am scheduled to be present for a Q&A, during which I plan to share a special short video (that I am currently editing) and welcome some important guests.

As is customary during the theatrical run (which will be three weeks in Tokyo) special post-screening events are being planned by the film's distributor.  Typically, this would take the form of a Q&A with the director (in this case, me).  However, I have thrown a spanner into the works for my distributor: on May 11th, the day after my film opens in Tokyo, I am leaving the country.

Despite how this may sound, it has nothing to do with the recently passed Secrecy Law (INFO); I will be attending screenings of the film in Canada and Brazil. 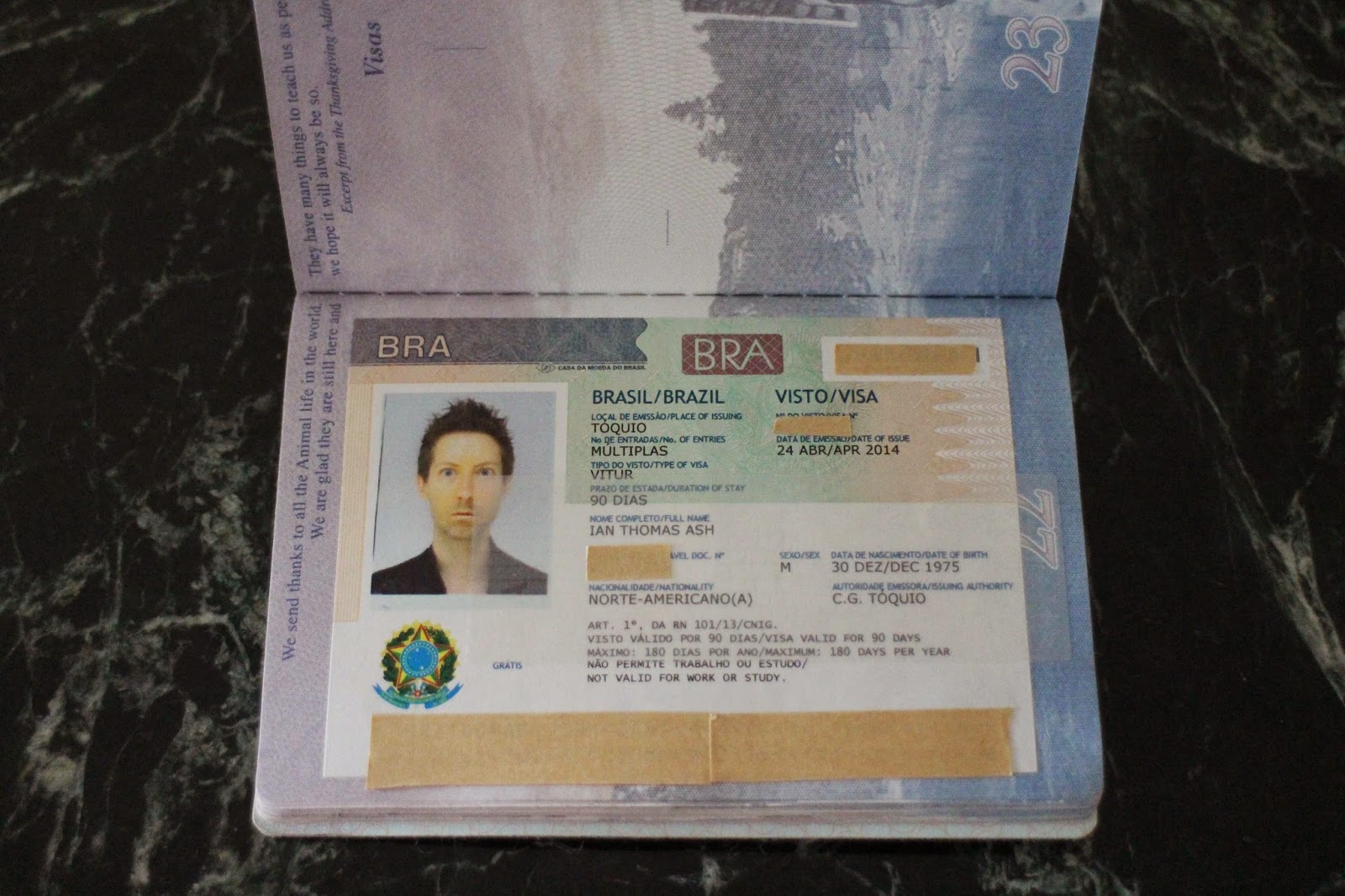 On May 12th, both of my films about Fukushima, 'In the Grey Zone' (2012) WEBSITE and 'A2-B-C' (2013) WEBSITE will screen in Global Visions Festival in Edmonton, Canada.  Not only will this be the Canadian Premier for both films, but it will also be the first time for both of the films to be screened together.

Festival director Guy Lavallee will be screening the two films in reverse-chronological order: 'A2-B-C' documents what is happening now, while 'In the Grey Zone', which was filmed just one month after the meltdown, will reveal how the current problems began.  I am extremely honoured the screenings will be presented in cooperation with the University of Alberta's Department of East Asian Studies. 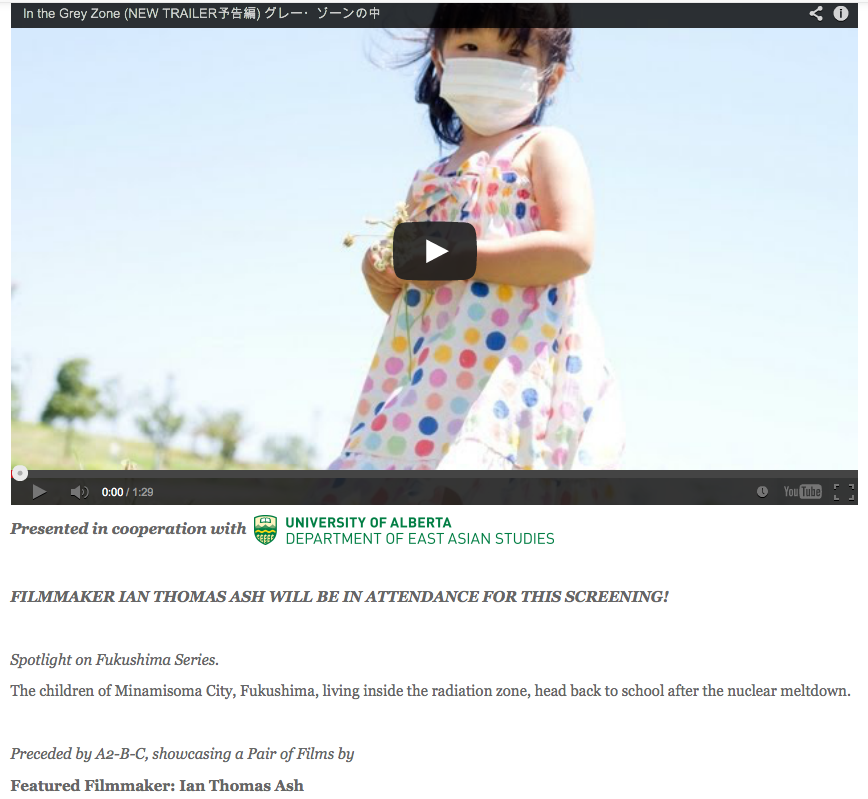 After the festivals ends, I will fly from Edmonton to Brazil, where 'A2-B-C' is screening in the Uranium Film Festival (WEBSITE) in Rio de Janeiro on the 18th.  It is an honour to be screening in this important festival, and I am also excited to be visiting South America for the first time! 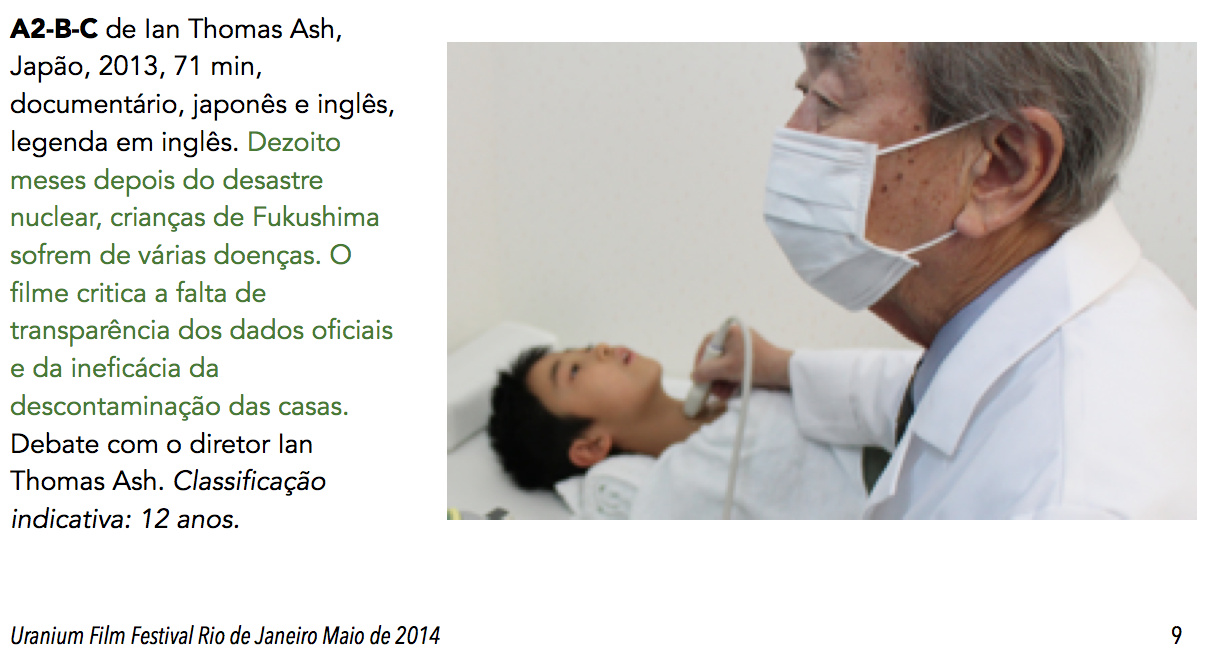 Meanwhile, back at the theatre in Tokyo, my distributor is planning some very special post-screening discussions with distinguished guests from the world of Japanese film.  And who knows, with the miracle of modern technology, I may even Skype in from Rio to say hello and answer a few questions.

Thank you all so very much for your continued support and encouragement.  I am so very grateful for the continuing opportunities to learn and experience through this film that your help has made possible.
Posted by Ian Thomas Ash at 11:08 pm