It has been a long time in the making.  I went from alluding to it, to talking about it outright (including in this VIDEO).  There were starts.  Then there were stops.  And sometimes I found it hard to contain my disappointment (like HERE).

But now it looks like my idea to "reverse-import" the film (explained HERE) is finally paying off: my documentary 'A2-B-C' is being released in theatres in Japan (cinema information HERE ポレポレ東中野).  Of course, part of me will be holding my breath until it actually opens on May 10...

Today, my distributor held a preview screening for mass media ahead of the cinema release, and it was a huge honour to have Radio DJ and broadcaster Peter Barakan lead the post-screening discussion.  Peter himself was in the news earlier this year when he spoke out about how the perceived crackdown on the media post-3.11 affected him personally (HERE), and today his observations and questions helped to contextualize the film for the media in attendance.

As I write this now, I wonder: to the audience of Japanese journalists, did it seem strange having two white people, one a broadcaster and one a filmmaker, speaking in Japanese to each other about the difficulty of getting the media to feature stories about the problems depicted in my film?  I must say, I'm looking forward to tomorrow's papers...

(April 15 at 23:42  Just minutes after I published this blog, I was alerted to an article that was already online about today's press screening.  In this day and age, I should have known I wasn't going to have to wait until "tomorrow's papers".  Article HERE.) 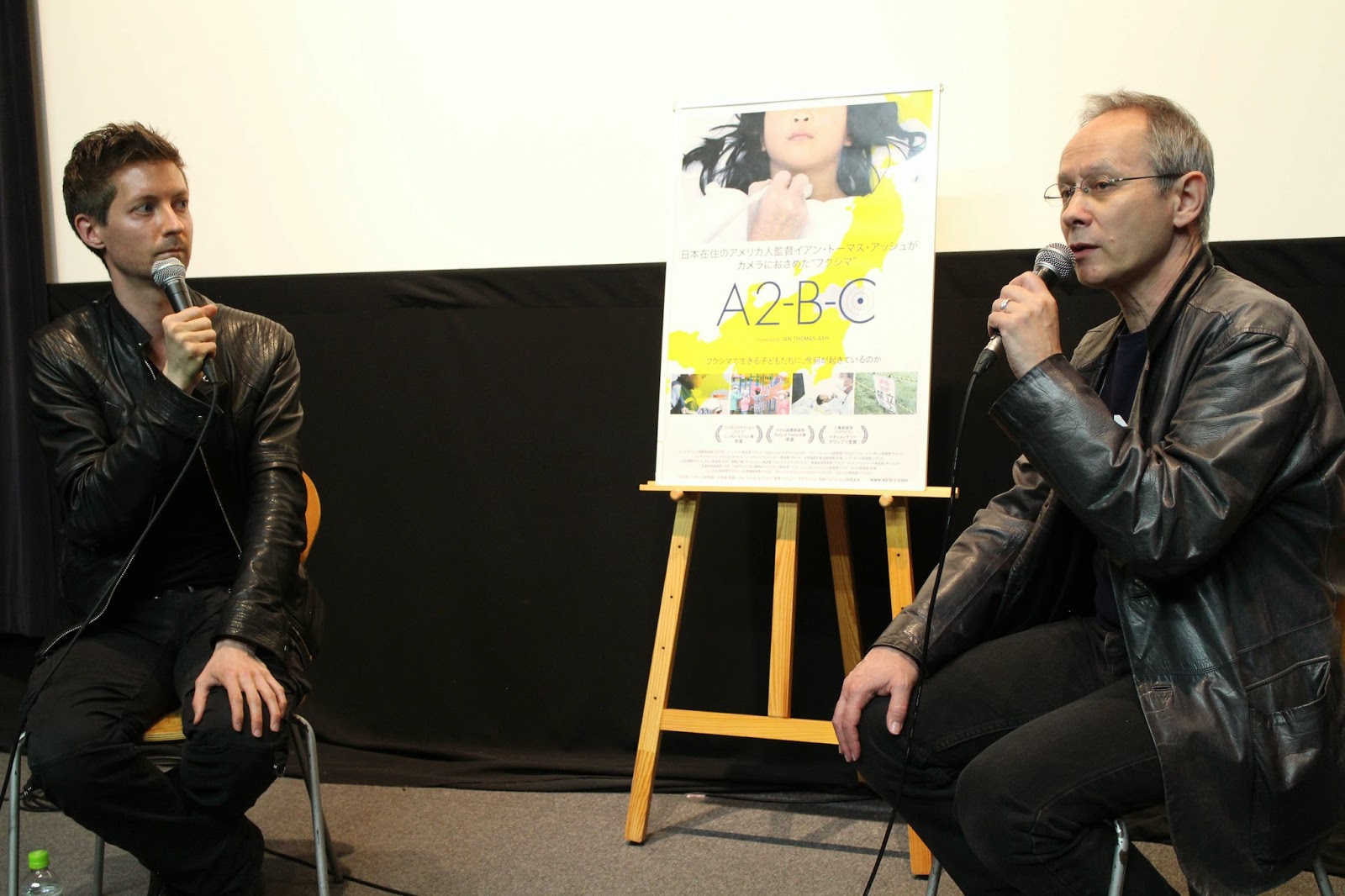 The news of 'A2-B-C's upcoming cinema release was first announced on March 14 on Eiga.com, the biggest website in Japan for film-related news (HERE 日本語).  My distributor then followed this up with the launch of a new Japanese website for the film (HERE 日本語のウェブサイト) to compliment the English website (HERE).  Together with new graphics, the Japanese website also features a new bilingual theatrical trailer, which is currently playing in the cinema:

The startling new graphics also feature prominently on the posters for the film (front and back BELOW) and depict a yellow map of Japan with the prefecture of Fukushima coloured grey and concentric circles in the 'C' of 'A2-B-C' representing the radiation zones around a solid dot where the damaged nuclear reactors lie.  It is, quite frankly, a shocking image to me and a concept I never would have come up with on my own.  And it solidifies for me what I have said many times before (including HERE), that filmmaking is all about team work. 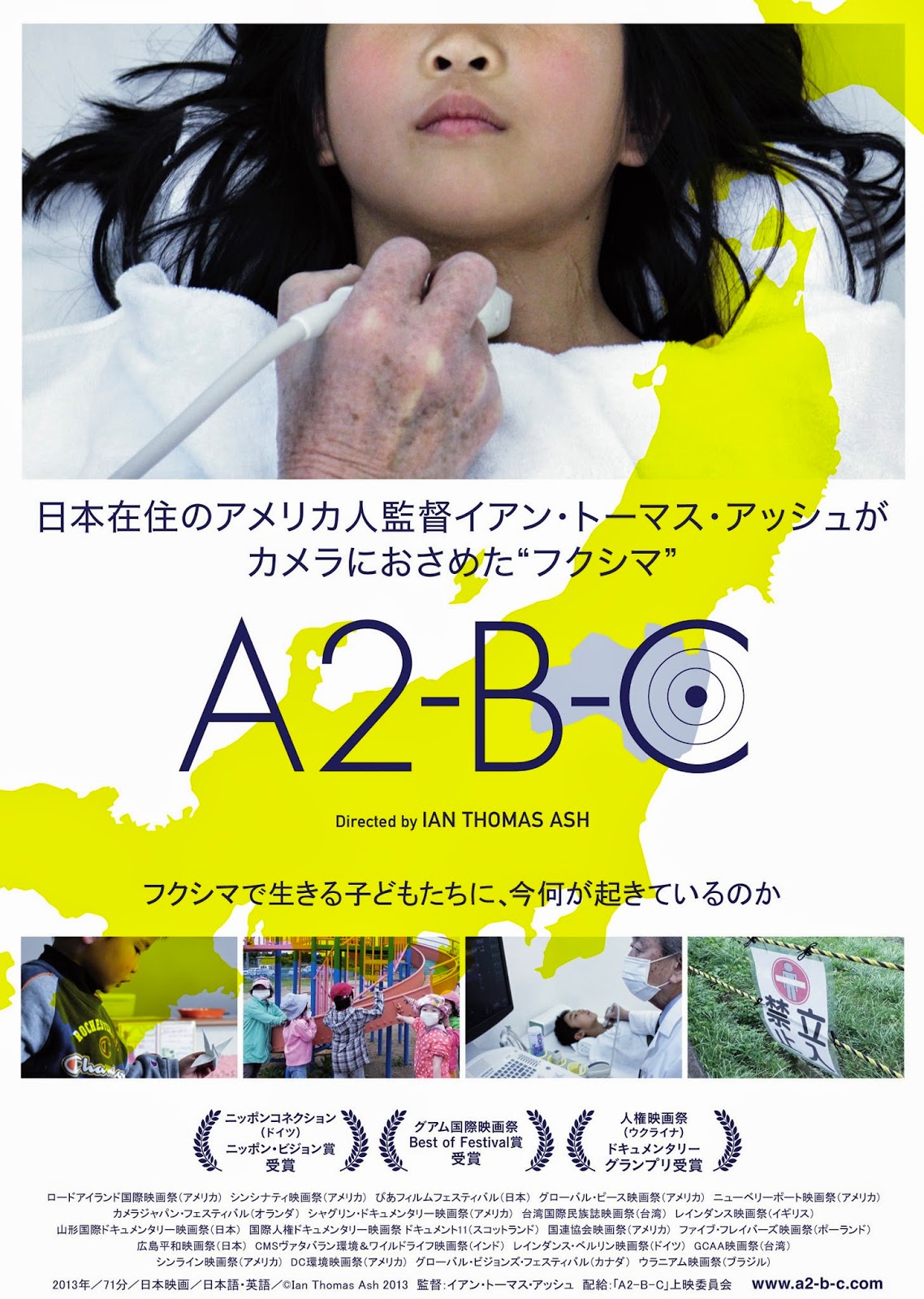 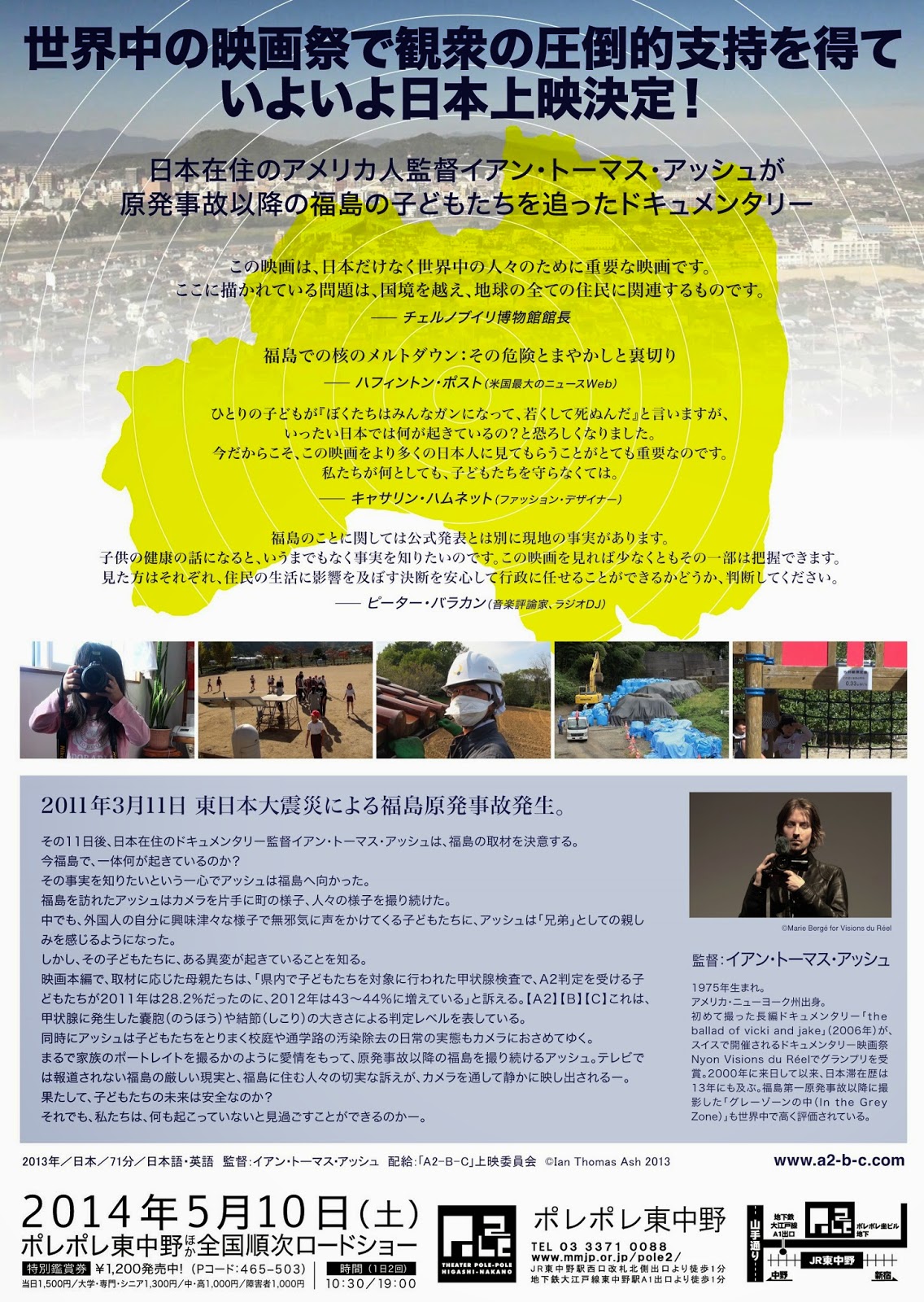 If the Tokyo box office does well, the distributor will be bringing the film to cinemas across the country.  And that is my hope, for the voices of the mothers in the film to be heard across Japan; for just as the graphics that were drawn by the artist who was inspired by the film show: this is not a problem that is only affecting Fukushima.
Posted by Ian Thomas Ash at 10:46 pm

I'm happy to see the movie spreading in Japan. But don't you think it's time to get a DVD out, screenings have a very limited impact.

Thank you for your comment and support. A DVD release is planned, but will take a bit more time. Thank you for your understanding that there is a lot that of consideration that goes into each decision that is made given the constraints of resources.