Following the cancellation of all domestic Japan screenings of 'A2-B-C' in March (INFO), the private screening system for the film has been reestablished  After being taken offline, the Japanese website for the film (HERE) went live again yesterday (August 3, 2015), where it was announced that reservations are now being taken for screenings of the film taking place on or after September 6, 2015. 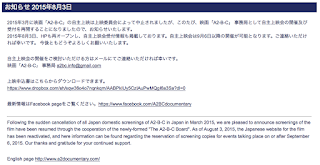 Thank you all so much for your support!  これからも宜しくお願い致します！

I am glad that you did overcome the issue of the distribution of the film and you finally found the reason of the cancellation of your film. It is not because of censorship but a kind of feeling of conflicts between minor political factions as far I know. You made big deal of censorship, but there are not yet strong censorship held by the Japanese government because people are cooperative without enforcement.
I had quite similar issue when I worked as a translator about Fukushima children clinic with Chukaku faction. However, I did not care about the criticism on me to work with Chukaku faction but cared children, and setting up the children clinic was the most crucial matter to me.