Since shortly after the reunion three weeks ago of Mr. Hata and T (STORY), the son he had not seen in 30 years, Mr. Hata's health failed quickly.  Traveling between Tokyo and Mr. Hata's home in Tohoku as much as possible, I spent a lot of time with him- sometimes filming, but often just being together.  My role in Mr. Hata's life had already evolved from filmmaker to friend, and during the last week of his life, I became one of his caregivers as well, helping to bath and care for him.

On Friday, three weeks to the day of his reunion with T, Mr. Hata died.  The updates and kind messages I received from the around the world are collected in a postscript HERE.  The original story about Mr. Hata's reunion with T is HERE.

Only part of my relationship with Mr. Hata, his wife and their extended family is documented in my photo series, but it is certainly a significant part.  I plan to write down and someday share about the rest, much of which I am still processing. 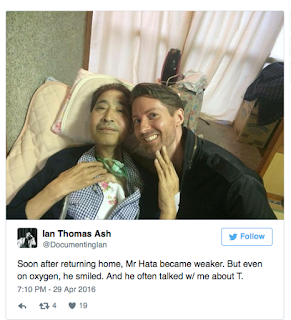