I am extremely honoured to have screenings of my films in several countries this week!

On Wednesday (May 25) the Korean film festival DMZ DOCS is holding an encore screening of my film '-1287' (WEBSITE) for "family month" (May) at 20:00 (INFO). I was honoured to receive the First Prize in the Asian Competition at the 2015 edition of the festival (STORY). 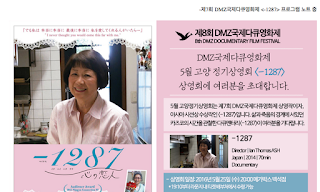 On Friday (May 27), my documentary 'Dying at Home' (WEBSITE), which was commissioned by NHK World, will be screened at 20:00 during a special event organized by NHK WORLD at the 2016 Nippon Connection Japanese Film Festival in Frankfurt, Germany (INFO).  I have had the honour of attending two previous editions of Nippon Connection; in 2013 when I received the Nippon Visions Award for my film 'A2-B-C' (STORY) and in 2015 when I received the Audience Award for Best Feature Film for my film '-1287' (STORY). 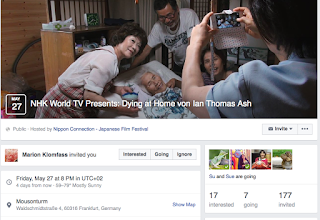 And on Saturday (May 28), '-1287' will be screening in the touring section of the Taiwan International Ethnographic Film Festival (INFO) in Taoyuan.  I was honoued to have my film 'A2-B-C' screened in the 2013 edition of TIEFF (STORY) and also to attend last year's main festival with '-1287' (STORY). 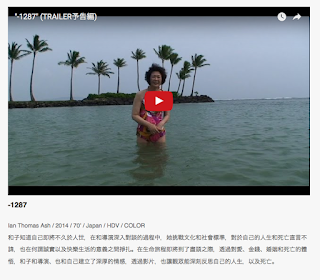 Thank you all so much for your encouragement and continued support of my work.
Posted by Ian Thomas Ash at 10:24 am