Each autumn for the last three years, I have taught a class during the autumn term at the University of Tokyo.  Teaching intensively so that the schedule allows for travel to film and attend screenings, I teach a 30-hour class in 6 sessions of 5 hours each (!) on consecutive Saturdays.  This year, my class is focusing on the editing of oral histories.

In addition to my regular class, I was also honoured to present a guest lecture to the greater campus community on November 2 as part of a special series. 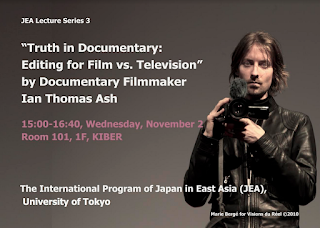 I have also returned to my post teaching evening/ weekend filmmaking classes at the Japan Visual-media Translation Academy (INFO), where my work was also featured me in THIS in-house article.

Meanwhile, in the midst of filming a new documentary for NHK World (INFO), producing a feature documentary by another director (more to come on that in the next couple of months) and my teaching duties, I have been asked to create a series of documentary-style videos for the Imperial Hotel Tokyo, a luxury hotel with a deep-rooted history in Tokyo.

The first of the three-part series, which each will contain a video and column, was published this week on the Imperial Hotel website (HERE).  A direct link to the video is here: