It is hard to believe that the six-year anniversary of the March 11 triple disaster of earthquake, tsunami and Fukushima nuclear disaster is approaching.

Yesterday, I was honoured to serve as the MC for the press conference "Yoshiko Aoki, Fukushima storyteller" at the Foreign Correspondents' Club of Japan (FCCJ press release HERE).  Although Ms. Aoki is a former principal of the Tomioka High School, located in one of the towns badly affected by the nuclear disaster, she began her speech by saying "I am not a politician, philosopher or professor.  I am speaking today as an ordinary citizen". 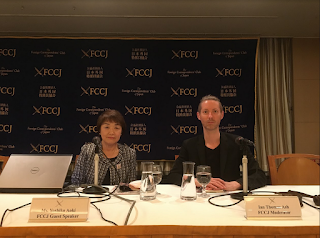 During the Q&A, when asked if she felt "abandoned" by the government, she replied "no".  Rather, Ms. Aoki said, since the accident, which she emphasized had been a man-made disaster, she had become more independent in her way of thinking and no longer depended on the government.  Now when a government official says something "stupid", she said she no longer even becomes angry as that is what she has come to expect.  Ms. Aoki's full comments and the Q&A that followed can be found on the FCCJ Channel here:

Then this morning (Thursday evening in the US) was the event "The Politics of Uncertainty: Reassessing Japan After the Fukushima Nuclear Disaster" arranged by the Japanese Cultural Association at Brown University (event info HERE).

Following a screening of my documentary "A2-B-C" (WEBSITE), I was honoured to join via Skype the panel discussion, which included: 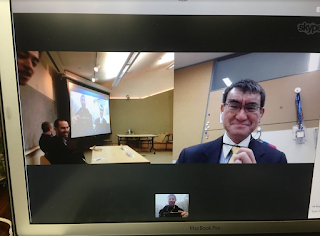 This was the first of several events I will be taking part in at universities holding events to mark the 6th anniversary of 3.11.

An article about the screening has been published by the Brown Daily Herald.  READ 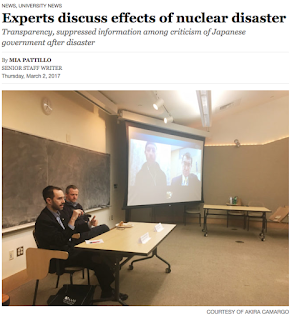