Much of the time I spend in Fukushima is focused on documenting the potential danger to the children from radiation, but there are fun and relaxing times as well.  Everyday I meet amazing and beautiful people, and it is such a pleasure to get to know them and an honour that they choose to share their stories with me.

Although I do film a lot,  the majority of my time here is spent getting to know the people whose lives I am documenting.  We often have meals together, relax and chat, and I have even been invited to stay with families so that I could film what their home life is like.

I often think that a documentary about how I make these films, that is, what happens when I turn my camera off, would make an interesting (and funny!) film.

Having lunch today with some of the mothers I have been filming was really relaxing and we had time to just chat and get to know each other.


Taking a break from filming, I read a book with Koutarou, 9, (as he turns the table on me and takes my picture!) his sister, Kae, 5, and his brother, Shinjiro, 4.  We often play games, joke around, have cake, fold origami and laugh a lot. 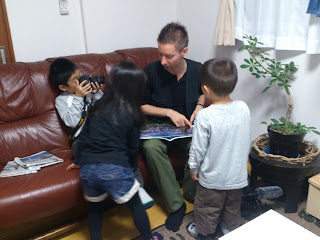 But when I met Mr. Akiha tonight, I was reminded that these happy times with the children are not to be taken for granted.

Although Date City is outside of the official evacuation zone, it has areas where the radiation levels are equal to or even greater than some places inside the zone.  Like many parents, Mr. Akiha feared for the health and safety of his two children and chose to voluntarily evacuate them along with his wife.

But unlike families who are officially evacuated, Mr. Akiha's family receives no compensation or official help in relocating his family.  In addition, his land and home are located 50 km from the damaged nuclear power plant and contaminated with radiation and so are worth nothing.

Mr. Akiha, like countless other Fuksuhima fathers, has evacuated his wife and children to safety but he himself has had to remain in Fukushima to work in order to pay to keep his family evacuated.  His wife and children are now living in Aichi Prefecture, more than 600 km away.

These children may be safe, but their families are now separated.

Mr. Akiha showed me a picture of his wife, his son, Renon, 13, and his daughter, Mahiro, 10.  Looking down at it he said, "I can't hold their hands or touch their faces." 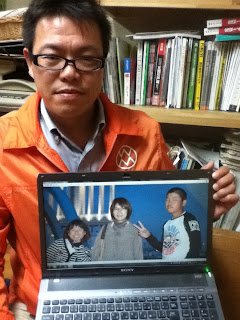 Aside from the sad parts of your work I've very much enjoyed the window into the life of normal Japanese persons' life.

They've always intrigued me but especially so after 3/11. I must say I was impressed with their sense of community, unity and just plain old toughness.

From what I can tell you are really good with people! Especially the Japanese. (I expect you're the most polite American they've ever talked with, hehe) The way people open up to you is really amazing.

Also: The pictures of the little kids are just insanely cute. The bits of your work with them always makes me smile. I'm just such a sucker for kids after I had one.

Anywho', I shall cease my oft praise in case your ego doth explode! :P

Stay safe and have a good day!

Thank you so much for your comments. I, too, "enjoy" my work; it is a pleasure to meet these wonderful people and an honour when they share their personal stories with me. It is unfortunate, though, that this must take place within the terrible context of the radioactive contamination.

I am so glad to hear that the photographs and stories resonate with you. This is really only the second time I have tried to write down my thoughts in the form of a blog each evening after I film. I'm not a journalist, just a filmmaker writing down my experiences after a day of filming.

Thank you for your encouragement to keep going, keep filming, to keep getting out there to record the truth.

I think you're doing a really good job with the blog. Especially since it's not your chosen, weapon so to speak. hehe