This morning I accompanied Mrs. Oyama and Mrs. Shima to the lab that the City of Date in Fukushima has set up for people to bring their homegrown foods to be tested for radioactive cesium.  Mrs. Oyama brought some Japanese radishes that she and her husband grew in a greenhouse, and Mrs. Shima brought some homegrown Asian pears.  Both mothers are concerned about the cesium content of the food and water that their children consume and make great effort to try to imit their children's internal radiation exposure. 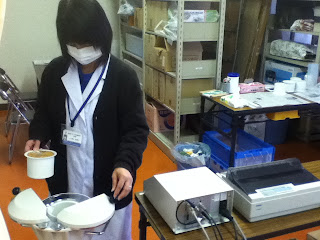 Mrs. Oyama's greenhouse-grown radishes were found to be within the government's limitations for cesium, and therefore deemed suitable for consumption.  The Asian pears Mrs. Shima brought, however, were found to contain a significant amount of cesium.  Having to think about each and every food their children consume is the "new normal" for the people of Fukushima. 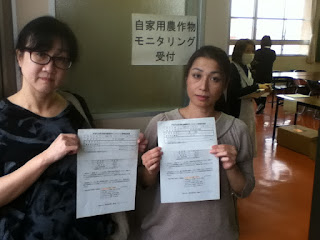 Yesterday afternoon, I accompanied Mrs. Sugano to the Citizen's Radioactivity Measuring Station in Fukushima City, where she brought her son, Koutaro, 9, to be tested for internal radiation exposure.  First, Koutarou's clothes, hands and feet were scanned.  As they waved the wand around his head and face, he didn't even flinch and seemed quite used to the process and even seemed to know the order of the test. 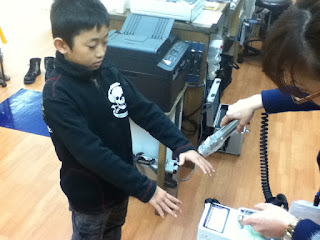 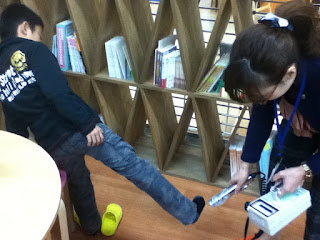 Koutarou then changed into a hospital gown. 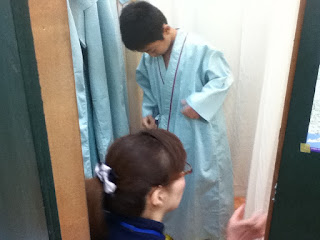 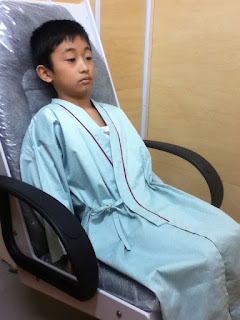 I will be interviewing Koutarou's mother later in the week to find out his test results.
Posted by Ian Thomas Ash at 10:44 pm