May I spill the beans now, please?

Sometimes film festivals honour a filmmaker by giving them an "early decision"; that is, informing them that their film has been accepted into the festival long before the official announcement.  This can even be so early that when the festival offers this early decision they may actually still be accepting submissions.

While receiving an early decision from a festival greatly helps a filmmaker begin to make travel plans and preparations, it comes with a strict condition:  the filmmaker is forbidden to announce acceptance into the festival until after the official press release announcing the line-up of films is released by the festival itself.  This can mean a tough few weeks (or even months) of keeping quiet as a filmmaker knows about upcoming screenings but is not allowed to talk about them.

So many people who have been supporting my work on 'A2-B-C' (WEBSITE) have been asking me when the film is going to be screened in Japan.  The truth is that I've known about the Japan premier of the film for a while now but have not been able to talk about it until today:

Today, on the same day as the North American Premier of 'A2-B-C' is being held (HERE), the official announcement of the full line-up of films that will take part in the 35th annual PIA Film Festival in Tokyo was made, and I am extremely honoured that among those films is the Japan Premier of 'A2-B-C'. 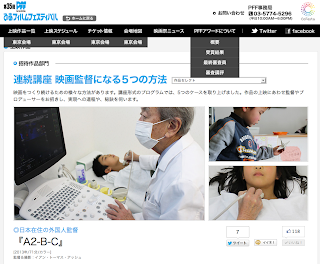 And watch this space:  there are at least a few more things that I'll finally be able to talk about over the coming days and weeks...
Posted by Ian Thomas Ash at 11:08 pm