Writing another blog from Narita airport, I try to remember how many trips I have taken abroad in the past two months to share the story of the mothers and children of Fukushima with audiences all over the world.  I am so grateful to all of the film festivals who have given the mothers of Fukushima a platform for their voices to be heard.  This experience has changed my life, and I pray that it will, even if in just the smallest of ways, change the lives of the families who took part in the film and those that share in their struggle by watching it. 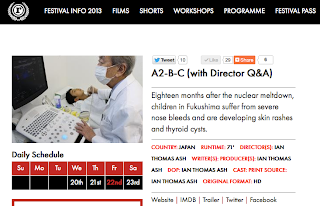 The third leg of the World Tour of 'A2-B-C' (WEBSITE) begins today.

It is an immense honour to have 'A2-B-C' invited to participate in the first edition of Berlin Raindance, where it is screening on Friday evening (INFO).  While I am in Berlin, I will be meeting the IPPNW doctors, who have been supporting so many of us with their data and research.  In March of this year, one of my photographs was published in an IPPNW journal HERE).  I am also deeply grateful for the invitation to present a lecture at the Free University of Berlin on Thursday.

This trip to Europe will be a fairly quick one, as I come home to Japan to attend screenings late next week of the film in Fukushima City (the first time 'A2-B-C' will be shown in Fukushima and which all the participants in it will attend) and in the city of Sendai (screening details HERE).

Then on the weekend, I will be traveling to Taiwan for more screenings and university lectures (INFO).  When I return home to Japan in December, the domestic promotional tour will begin in earnest, with screenings in Kobe, Kyoto and Hiroshima (DETAILS).


There has been a major setback, and it looks like the wonderful news that we were planning to share at the Fukushima Premier of the film next week will no longer be announced.  Yet I fear not, and I do not give up.  As one does not train with weight that is too light, I accept this resistance; no, I need this resistance, for it is this resistance that has driven me to push harder and to go further.

In August, I had to make a choice: to reach backwards in vain to to try get back something that had been taken away or to give in and go forward.  By "give in", it is not in the sense of "giving in to another person", no.  It is a "giving in" to a higher power, allowing one's self to be guided to a place one always knew was there but a place that one could not have gone to alone.

There is more resistance ahead, and I welcome it.  It was the resistance-filled summer that freed me in ways that made it possible for me to embark on this nearly three-month world tour.

We all have a choice when things fall apart: to stand there, frozen, asking "Why?  Why?  Why?" or to step over the mess and to give in to a higher power.  And as I write this, I realize something for the first time: the more I embrace the resistance, the more I am becoming it.

Do not give in to the resistance.  Become it.
Posted by Ian Thomas Ash at 10:16 am

Thank you very much for your work.
I posted in my blog. Mia
http://www.fukushimaappeal.blogspot.co.uk/

Thank you so much for your support and for all of your work to raise awareness about what is happening in Fukushima.