It has been a wonderful (and full!) two days in Kansai.  After three great screenings of 'A2-B-C' (website ENGLISH/ 日本語) in Osaka and Kyoto yesterday (STORY) I spent the night in Kyoto.  This morning I then traveled back to Osaka to conduct a Q&A session after the 10am screening at 7 Gei Cinema (info 日本語).

When I expressed my disappointment at being unable to stay in Osaka to take part in the post-screening discussion after the 14:30 screening as I had to be in Kobe in the afternoon, cinema boss Matsumura-san asked if I would like to introduce the film before leaving.  Typically, I do not like to introduce my films as I would like them to speak for themselves, but I decided to address the audience, even it was only to thank them for coming.

My greetings turned into a 20 minute pre-screening session during which people even asked questions, such as why the film isn't on more screens around the country, what my motivation was to first go to Fukushima, and about the first film that I made there, "In the Grey Zone" (WEBSITE). 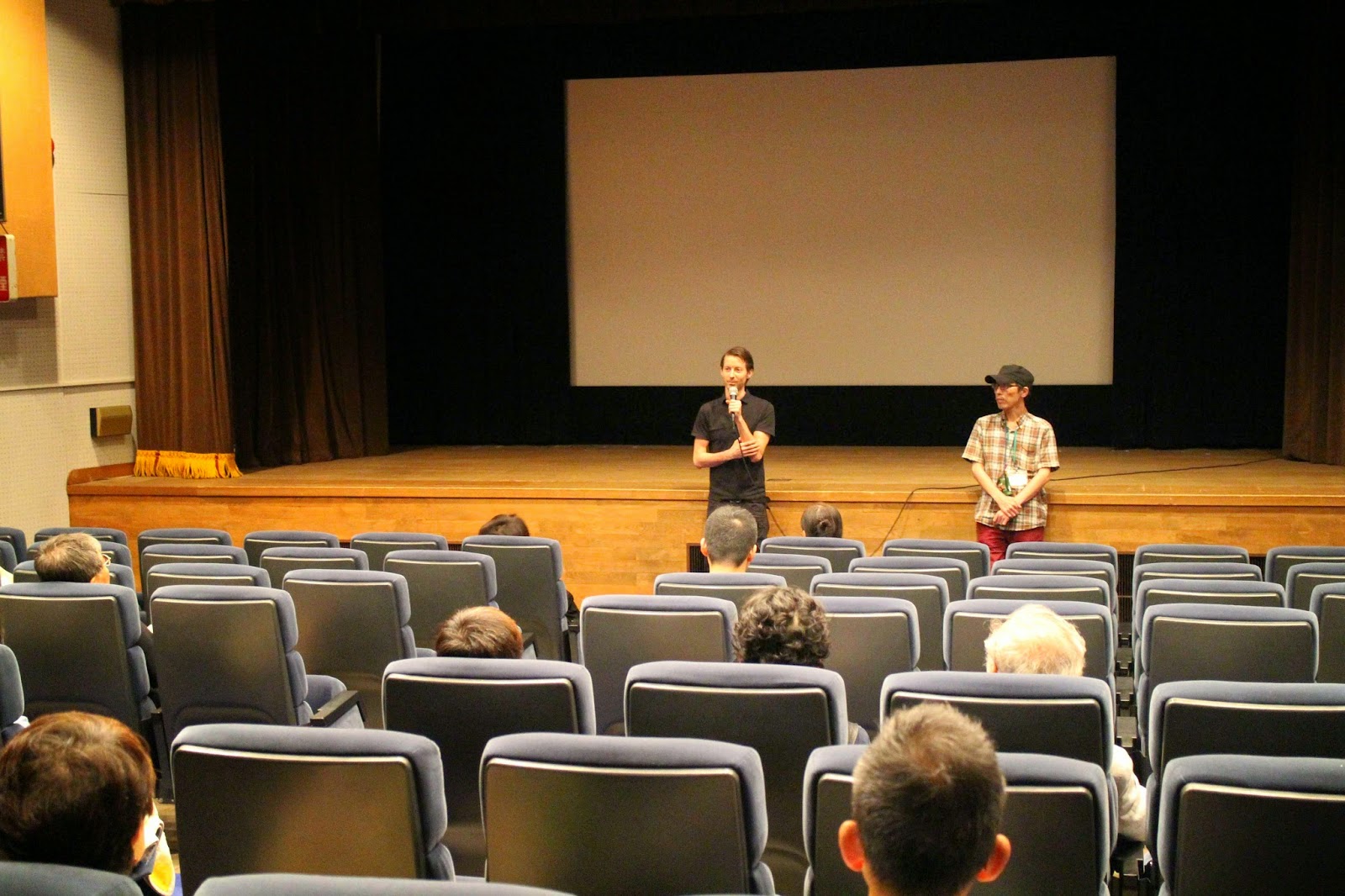 Someone in attendance at one of the screenings here yesterday filmed and posted the Q&A and following informal discussion (direct LINK).  I really do not like watching footage of myself, so I have not watched it yet.  Gee, I hope I haven't said anything inflammatory... 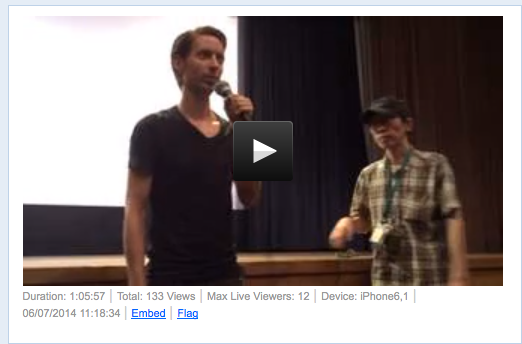 And speaking of inflammatory, the colleague who yesterday alerted me to the Tweets speculating about the condition of my thyroid (HERE) has today told me know about a group on Twitter dedicated to discrediting my film and me.  Checking out the page HERE (while holding my breath), I found it to be quite educational, and I even learned a few new (bad) words (!).  One simply-worded and almost philosophical barb immediately caught my eye.  It referred to a recently published newspaper article in which I was quoted as saying that the filming I am doing in Fukushima is my "life work".  It said:

"Life work is fine, but don't you think you ought to consider whether or not you are exploiting others to do that work?"


Back at the train station, I headed to Kobe where I had been invited to speak by members of Dr. Togo Tsukahara's laboratory in the Faculty of Inter-Cultural Studies at the University of Kobe.  The student members organized the event at which I was asked to speak about my work in Fukushima and to share clips from the dozens of short documentaries I have produced relating to the nuclear accident (many of which can be found on my channel HERE). 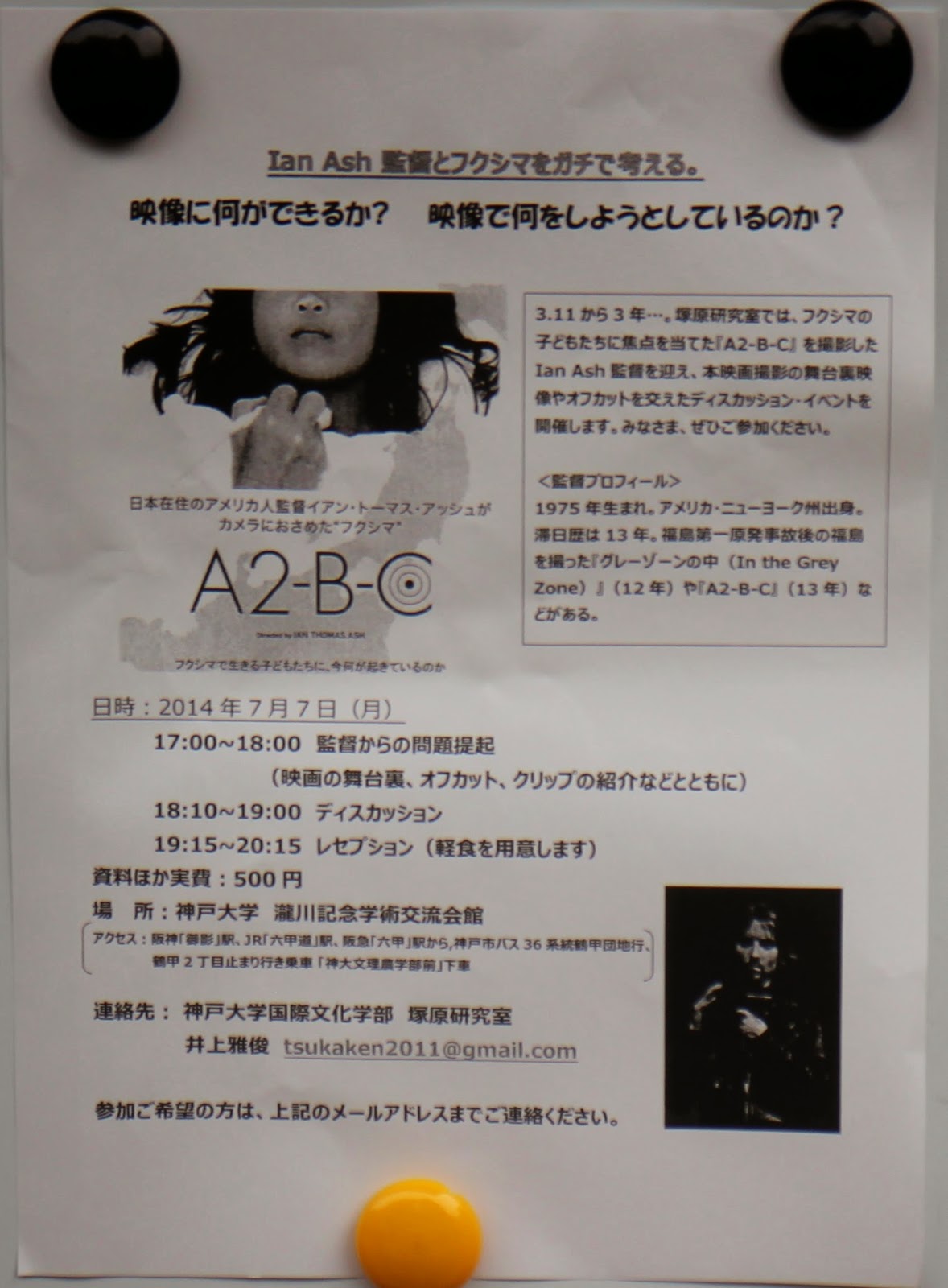 After opening remarks by student organizer Ms. Sakiguchi Mai and Dr. Tsukahara, I spoke for an hour about my journey from initial shock after the earthquake, to filming in Tokyo and then eventually to traveling to the Tohoku region (this progression is also documented in THIS VIDEO that I published for the 2nd anniversary of the disaster).  I used clips from my work to illustrate the evolution of my filming, including scenes from the early short films as well as from both of my feature documentaries about children who are being affected by the nuclear disaster.  I concluded the talk with a yet unpublished 10-minute scene from my most recent work in Fukushima.

Following, there was then an hour of discussion time with those in attendance.  The students, many of whom had both experiences living abroad and volunteering in the Tohoko area, asked wonderful questions.  One student asked about the role and responsibility of fimmakers to ensure that their films are seen, not only as people who simply make them and move on.  Another person asked about why my work focuses mainly on children and mothers.  Someone wanted to know if by documenting the fear and panic of the families that it could possibly be exacerbating the situation.  Another asked if focusing a lens on someone could cause them to speak against their will.  And I was asked about my thoughts relating to Japan's nuclear future. 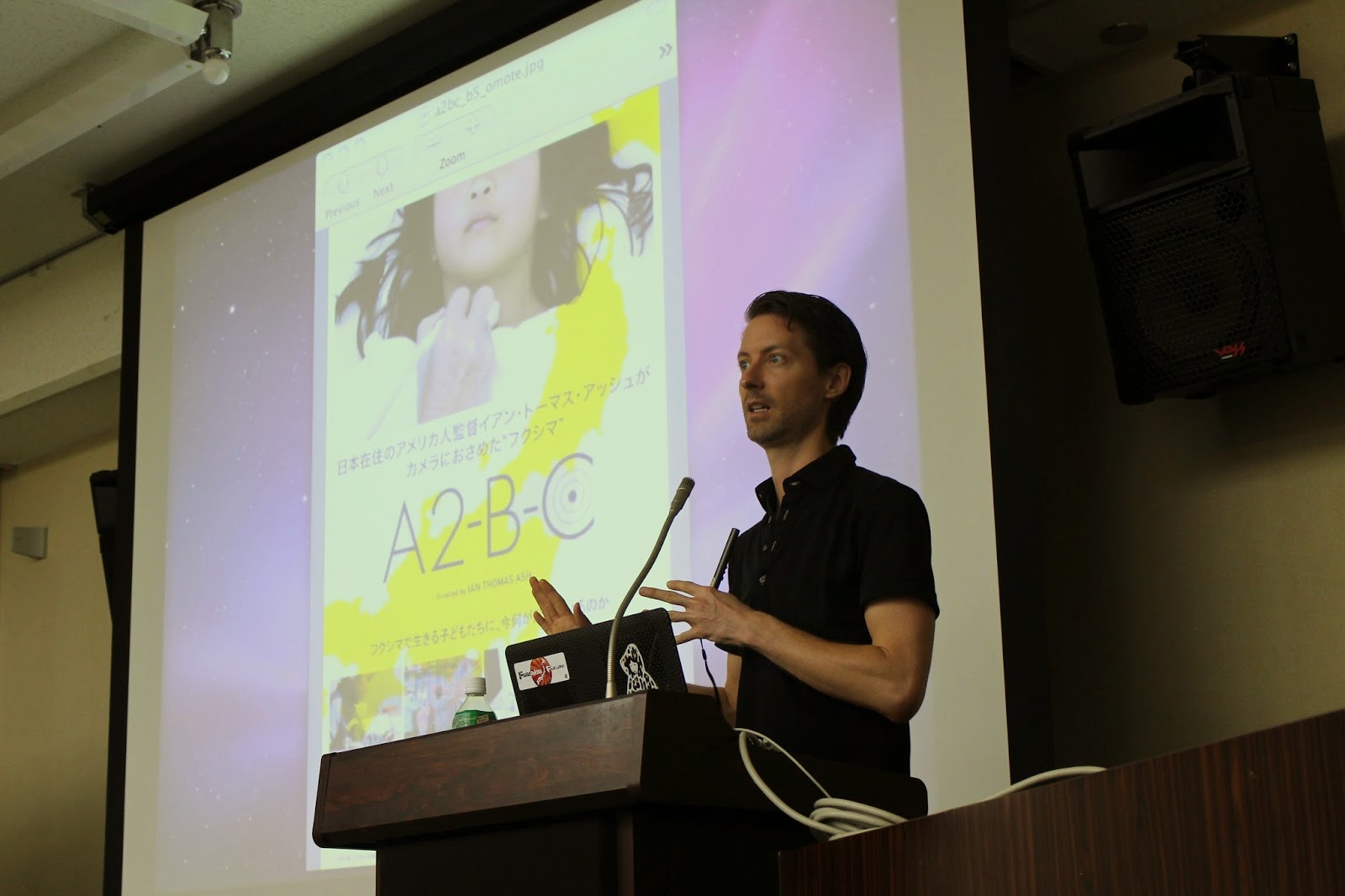 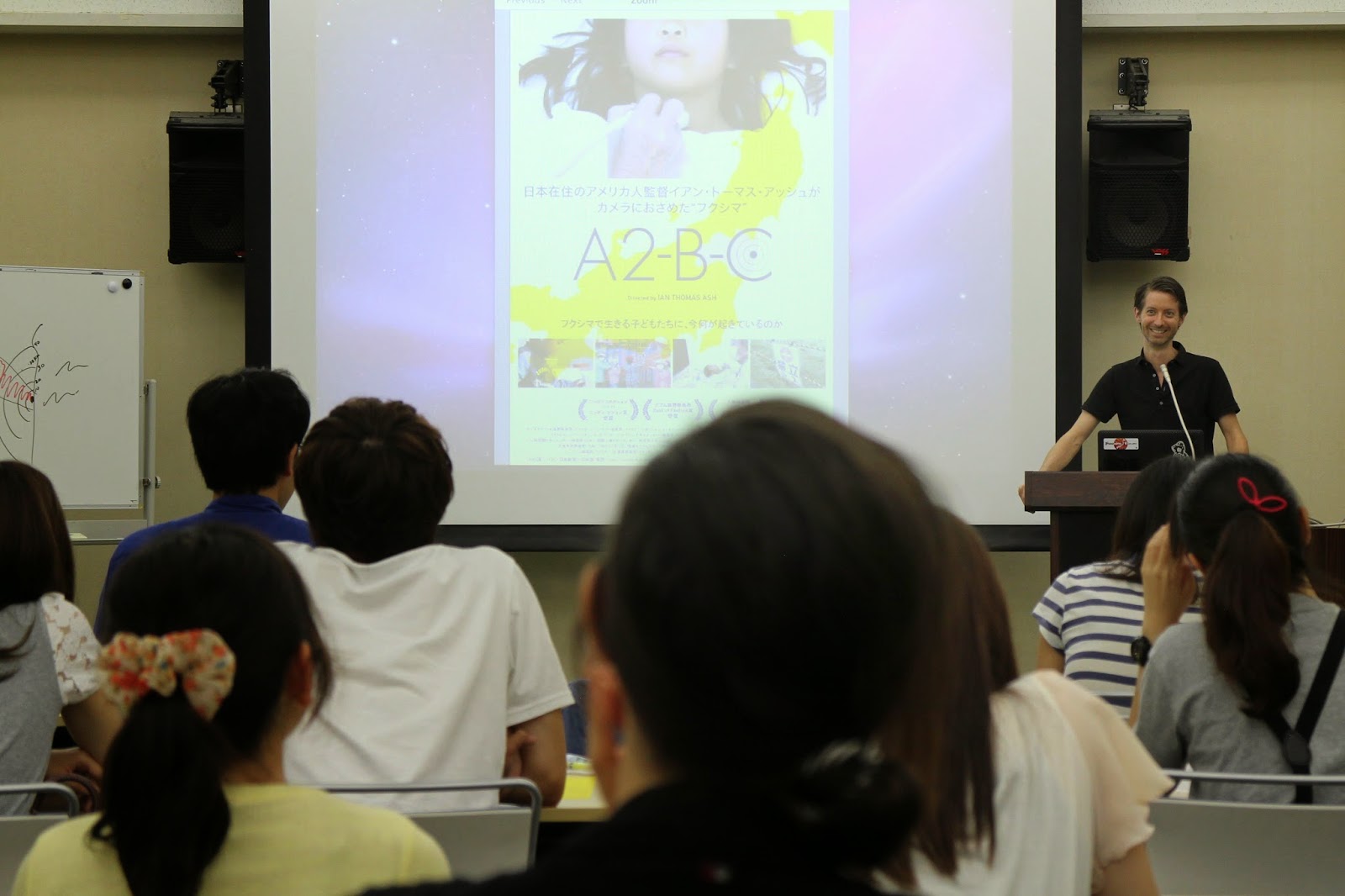 Following the main event, the attendees gathered together for more discussion over drinks and food. The less formal atmosphere allowed them to ask questions a bit more privately, or even about things that were not directly related to my work in Fukushima... like why I came to Japan.  There wasn't enough time to answer that one as the taxi to take me to the station pulled up, but I left promising to answer it next time. 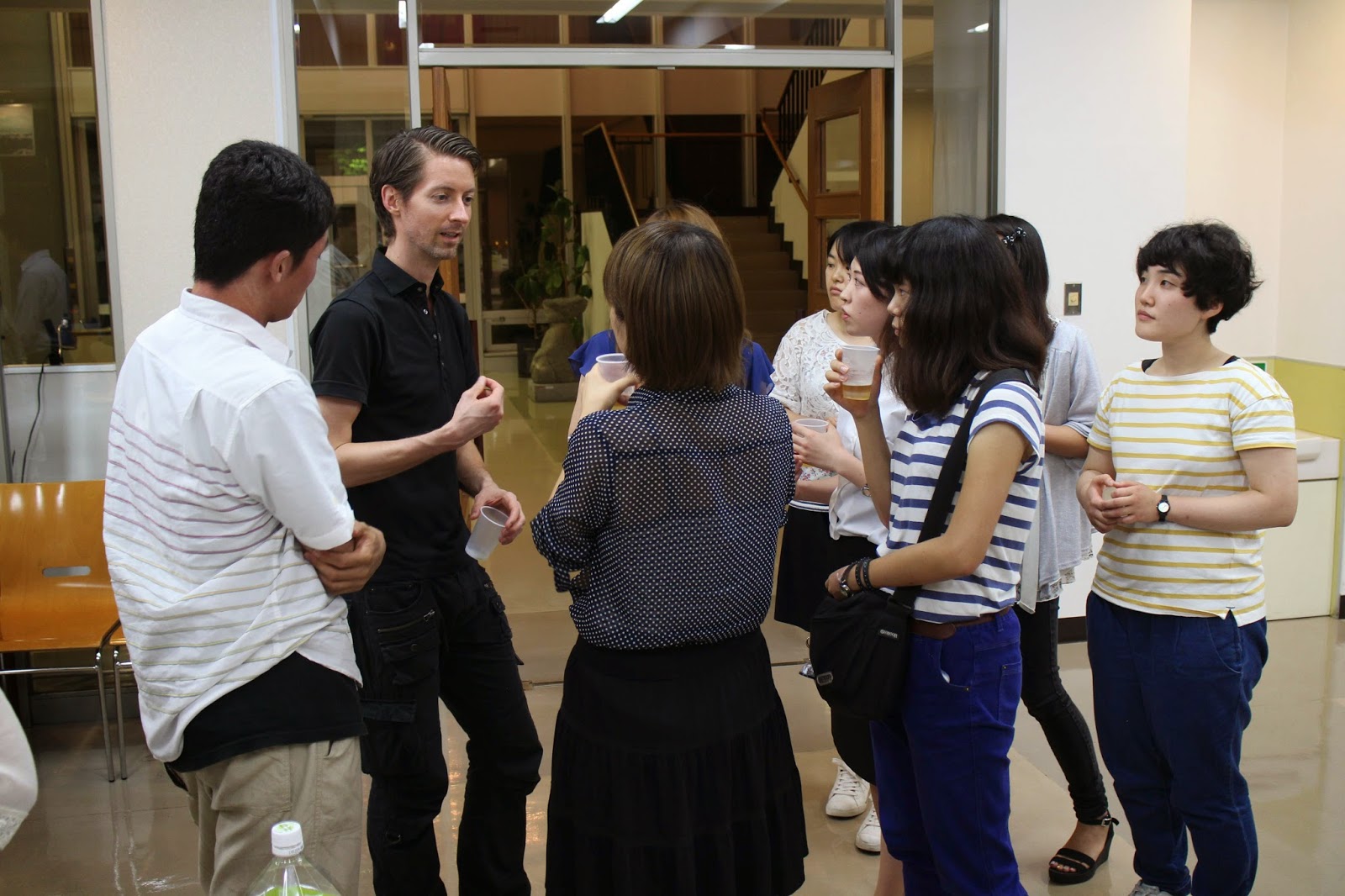 And now I am on the bullet train heading home, thinking about how grateful I am for all of these experiences to share my about work and reflecting on the many the things I learn from being given the opportunity to do so.
Posted by Ian Thomas Ash at 12:43 pm