Yesterday, Timothy Mousseau, Professor of Biological Sciences, University of South Carolina, gave a press conference entitled "Fukushima Catastrophe and its Effects on Wildlife" at the Foreign Correspondents' Club of Japan (FCCJ).  In addition to his work examining birds and other wildlife living around the damaged nuclear power plants at Chernobyl and Fukushima,  he has recently served on the National Academy of Science committee to examine the incidence of cancer near nuclear power plants (press release HERE).

His research is mostly focused on how animals and plants adapt to changing environments with a special focus on radiation adaptation. Since 2000, Professor Mousseau, along with other colleagues, has studied the impact on birds, insects, plants and microbes, with more than 60 scientific publications since 2005.

I first had the honour of meeting Professor Mousseau in March of this year in Germany at the congress "The Effects of Nuclear Disasters on the Natural Environment and Human Beings" organized by the International Physicians for the Prevention of Nuclear War, where we were both presenting our work (INFO).

On Thursday of this week, I attended Professor Mousseau’s presentation “Chernobyl, Fukushima and other hot places: biological consequences of nuclear accidents for avifauna” at the 26th International Ornithological Congress at St. Paul’s University, where his research partner Anders Moller also presented their work “Effects of radiation exposure on species diversity and population density of birds at Fukushima” (INFO).  At that time, I apologized to him for not being able to attend the press conference on Friday due to a prior commitment.  I then went to the FCCJ, where I am a member, for another appointment.

Within minutes of arriving, I was asked if I could "pinch hit" as the moderator of Professor Mousseau’s press conference the next day.  Although two of my films have been the subjects of press conferences at the Foreign Corespondents' Club of Japan (HERE and HERE), this was the first time I have been asked to moderate since becoming a member of the FCCJ shortly after returning home to Japan after completing my MA in the UK in 2005.  Honoured to accept this duty, I happily moved my appointments around, and wrote to Professor Mousseau to tell him that not only would I be attending his press conference, but that I would be moderating it as well!

In addition to being the moderator, I also "live-Tweeted" the press conference (@DocumentingIan Twitter account HERE, screen grab below) as I have done several times in the past (for example at the press conference given by Anand Grover, the UN Special Rapporteur, earlier this year HERE).

Professor Mousseau's work regarding wildlife living in contaminated areas around Chernobyl and Fukushima is revolutionary, and during the question and answer period, it led directly to the question "What lies ahead for the people who live in these areas?" In response, Professor Mousseau noted, "most medical research is conducted on animals as they share biological properties with humans. We are animals. Of course this (research) has relevance for humans."  He continued, "I don’t think we really know the potential outcome for people living in contaminated areas of Japan."

For those who could not attend, the FCCJ has just uploaded the entire press conference to their YouTube channel (HERE, direct link to the video BELOW). 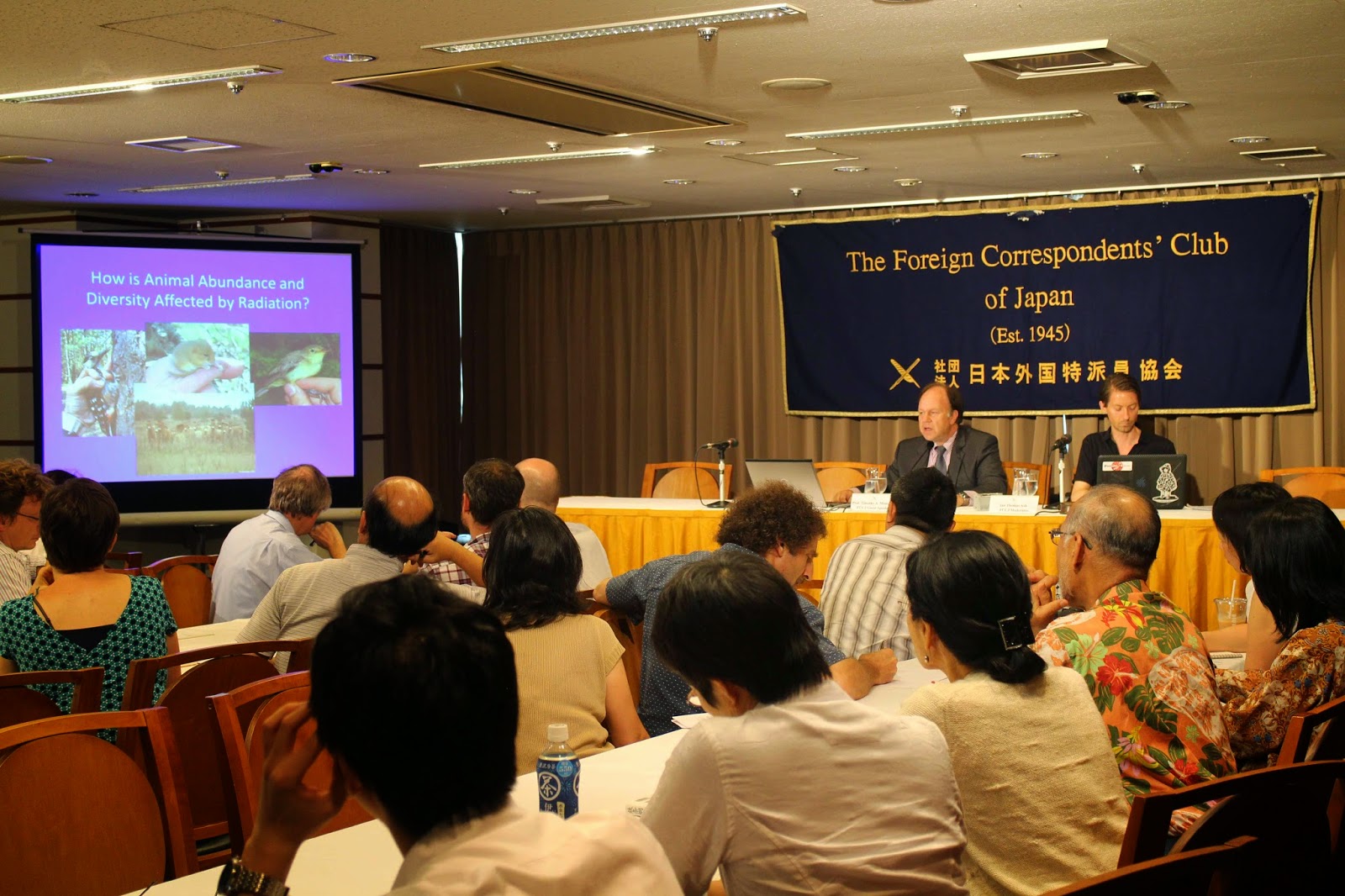 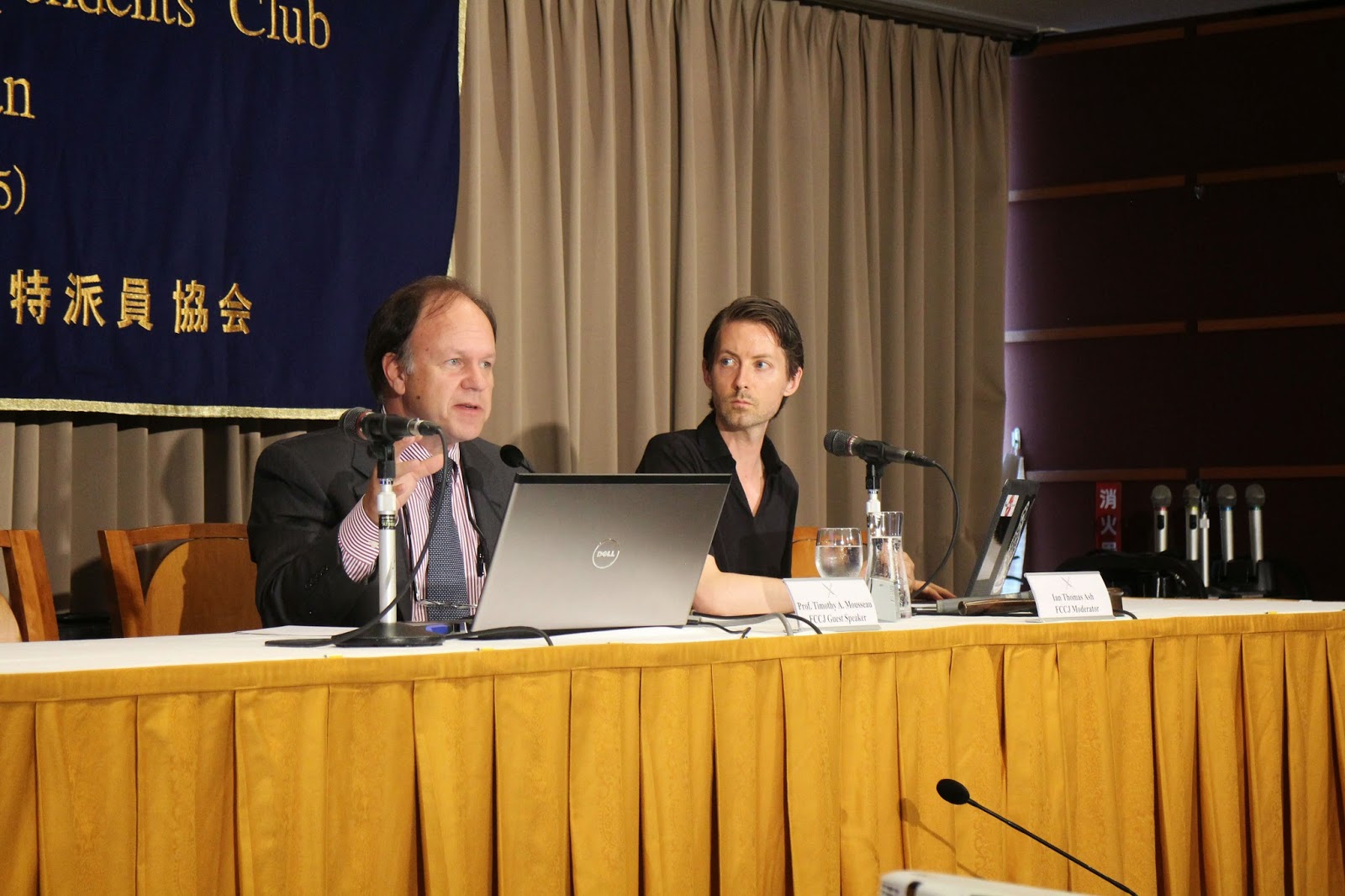 I am looking forward to the additional honour of participating in the conference “Exposure and Effect: Measuring Safety, Environment and Life in Asia” at Nanyang Technological University, Singapore, this coming October, at which Professor Mousseau and I are both scheduled to present our work (INFO).
Posted by Ian Thomas Ash at 10:57 am