After an AWESOME last screening of 'A2-B-C' in the Tokyo cinema on Friday (INFO), I was back on the road again yesterday morning, this time for the beginning of the Japan-wide release of the film.  Taking the bullet train, I headed for Western Japan for the opening day of the theatrical release in the Nagoya Cinematech (INFO).

When I arrived at the theatre, the screening was already underway, and I was over-whelmed to hear that it was to another sold-out crowd, with folding chairs in the aisles and cushions on the floor (please don't tell the fire inspectors!). 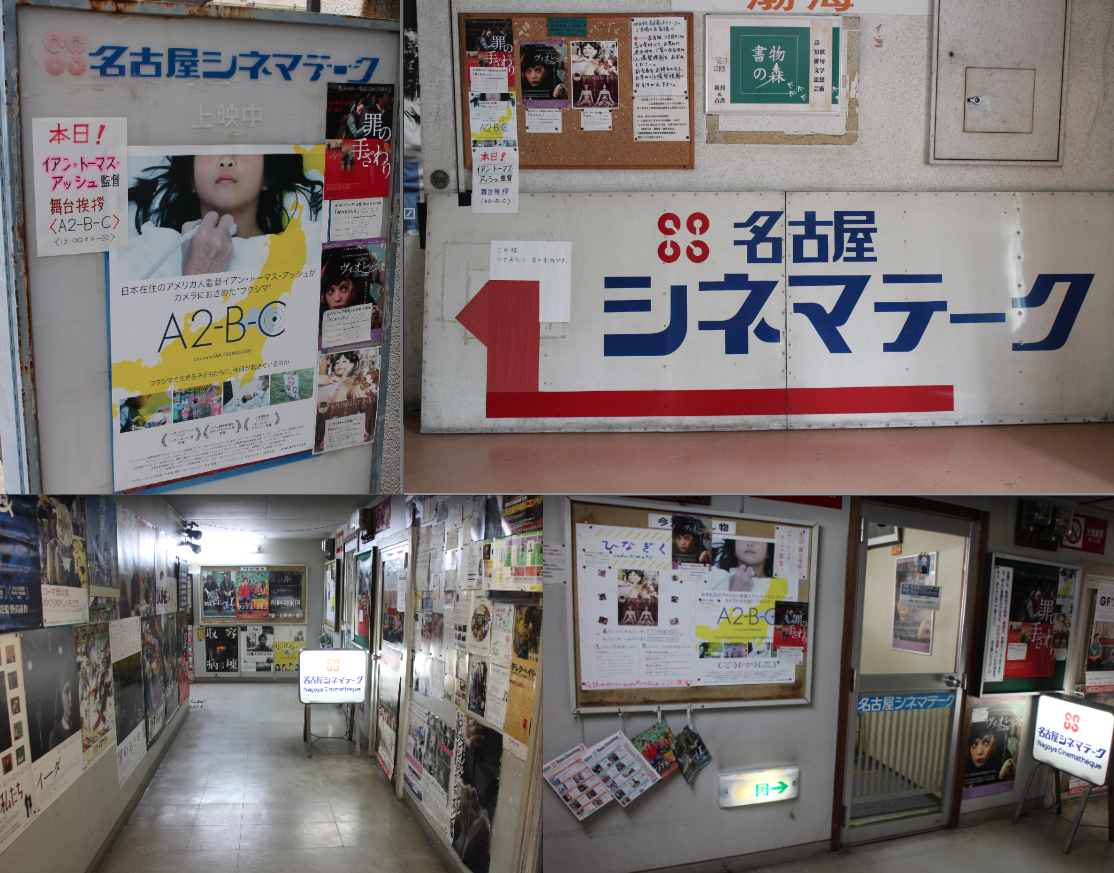 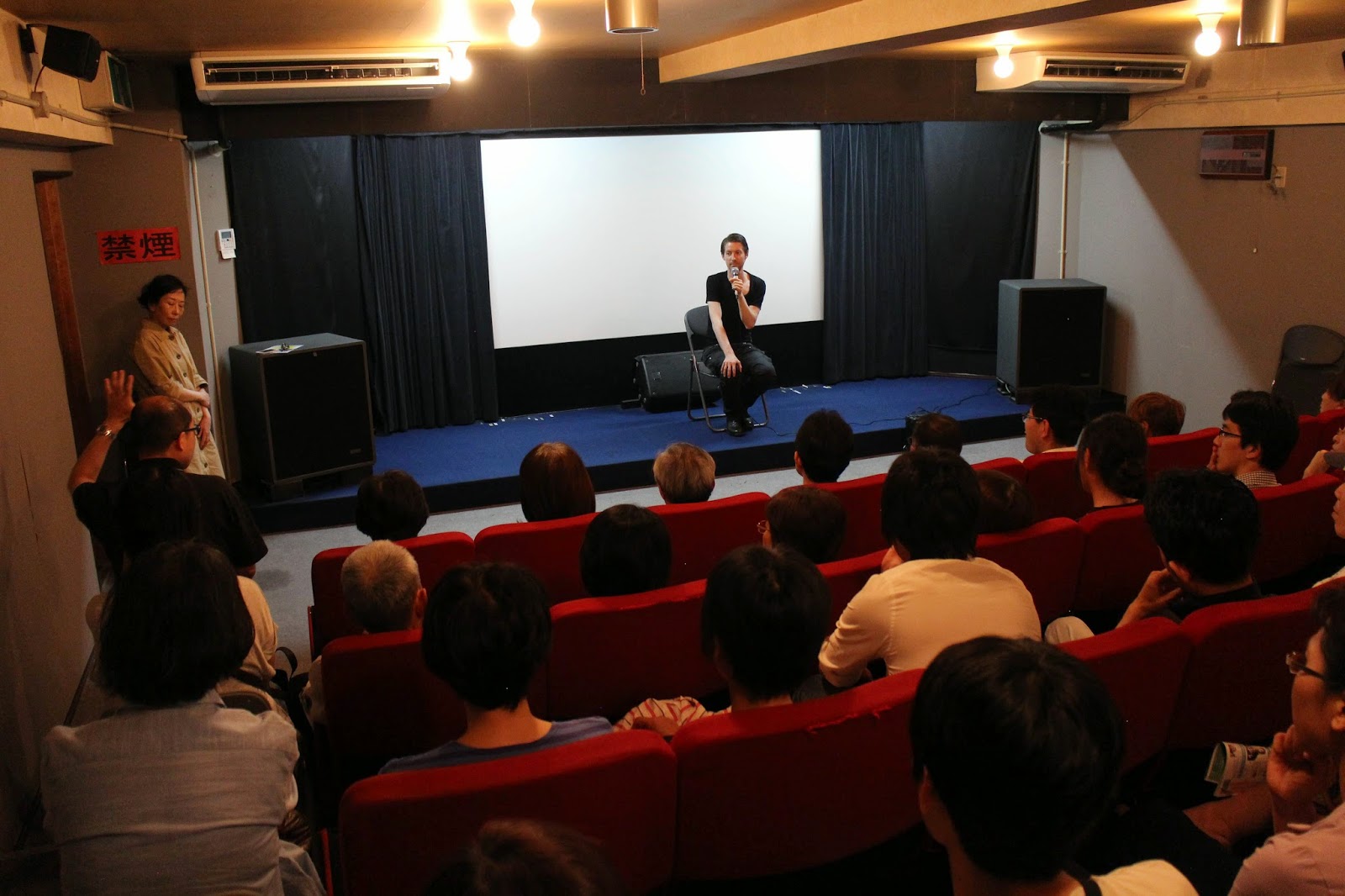 During the post-screening discussion, I was interested to find that several of the questions and comments focused not directly on the situation for the families in Fukushima, but rather on the effect that this nuclear disaster is having on the people here in Western Japan.

One young father shared that he expected to be more shocked by the film, but that he guessed he must be "used to the situation" because he didn't feel shocked at all.  He went on to say that while there is not so much concern here about external radiation exposure (given that this is quite far from the damaged nuclear reactors), he was extremely worried about internal radiation exposure from food sources.  As an example, he said that when he takes his children out for fast food, he never allows them to order a certain chain's fried fish sandwiches, because he fears that they may be made with bits of seafood that have not been properly tested for radioactive contamination.

With limited time for the Q&A, I had to prevent myself from getting on my soapbox and preaching that Fukushima aside, considering chemicals, additives, preservatives, processing, and GMO's, that fast food is not actually real food and certainly isn't something he should be feeding his children (!).

Instead I expressed my sadness that he was not shocked by what he saw in the film.  The situation for the families is horrifying and the fact that for so many people this is somehow becoming the "new normal" is a dangerous precedent (in February 2013, I wrote an entry called "A new normal for the children in Fukushima" HERE).  As Nozomi, the 17-year-old girl towards the end of 'A2-B-C' says, "Right now, the biggest problem is that everyone is starting to forget what's happening".

After the allotted time for the Q&A ended, an informal discussion continued in the lobby for nearly an hour, until I had to rush back to the station to move on to the next city in the tour. 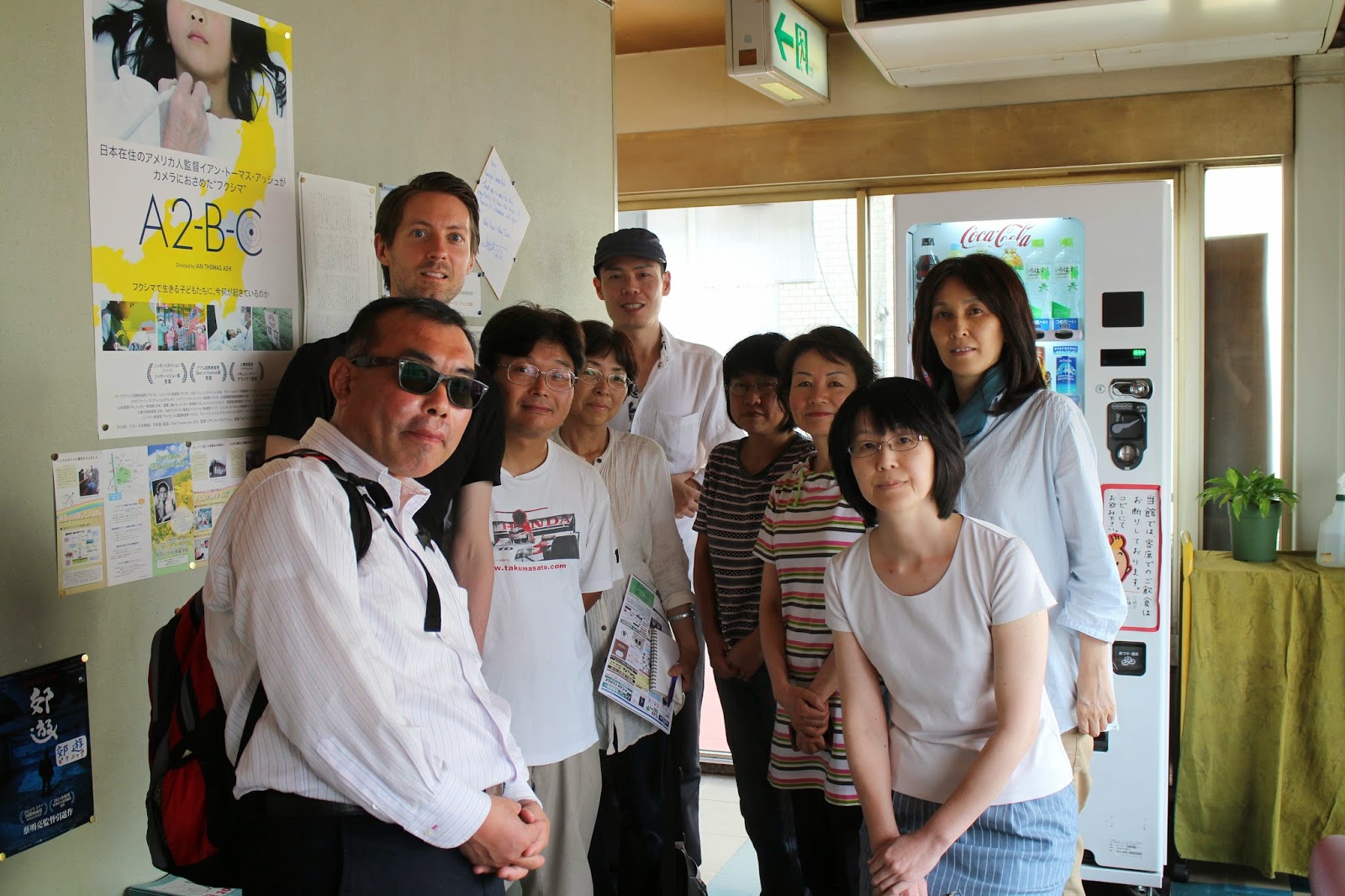 I hopped on another bullet train, this time headed for Hiroshima where 'A2-B-C' is having a two-week residency at the Yokogawa Cinema (INFO).  This is the second time for the film to be seen in Hiroshima, the first was during THIS film festival last year.

Arriving late last evening and with just about enough energy left to lift a glass, I did just that with the kind help of a local colleague!

This morning, I visited the Hiroshima Peace Memorial Park, one of my favourite places to spend time in this city.  As a friend guided me around, we sat by the water overlooking the Peace Dome.  Suddenly, my friend asked if it had occurred to me that I was from the country that had dropped the bomb and that he was from the country upon which the bomb had been dropped.  Looking up at the Peace Dome, I replied that, no, this had not occurred to me.  I thought about what he had asked.  After a few moments I looked at him and said that I felt I was there simply as a person, one who is against war and prays for peace. 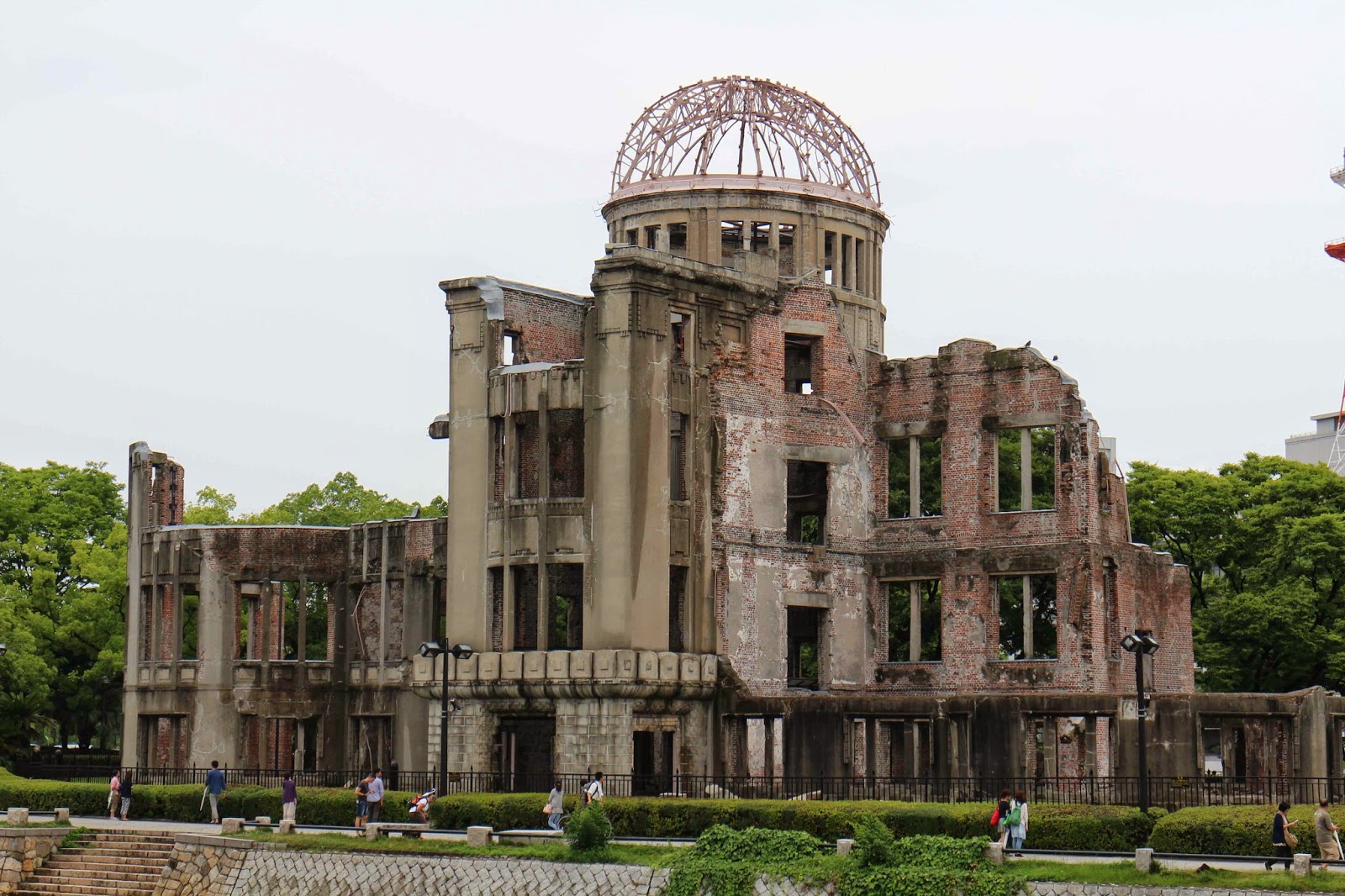 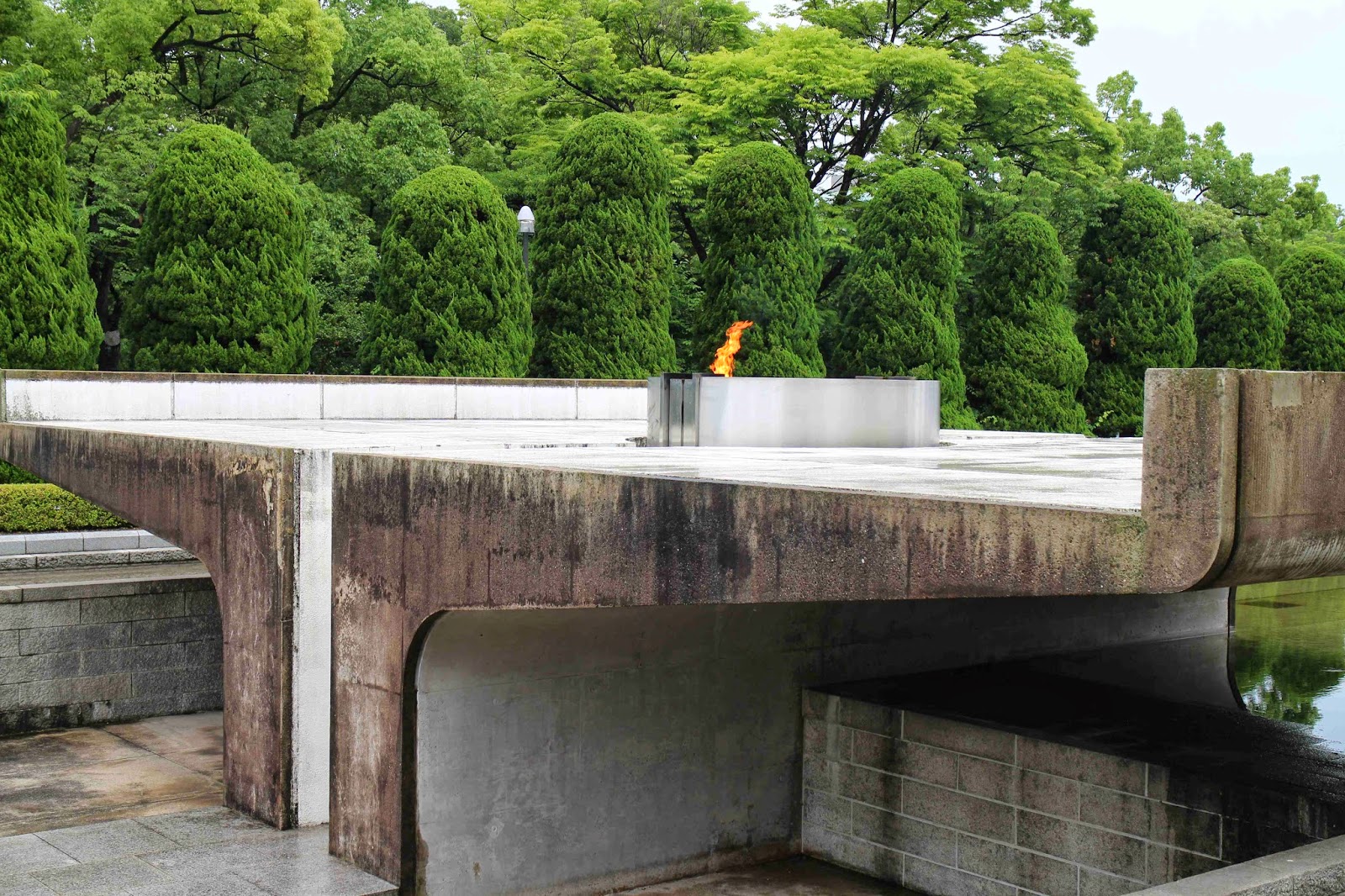 Next we visited the former building of the Japan Bank Hiroshima Branch where the Hiroshima Peace Poster exhibition 2014 was taking place (PHOTO below).  The bank survived the atomic bombing, and the grand building with its horrible history makes for both an amazing and intimidating exhibition space; amazing in that the main rooms with their vaulted ceilings and the basement with its industrial safes make for a gallery in which most artists could only dream of exhibiting... and yet intimidating in that it would be nearly impossible for any exhibition to compete with such a sacred space.

The first show I saw here was last year when Chim↑Pom's anti-nuclear-themed "Hiroshima!!!!" took over the entire place and made it seem as though this building had been curated to house their exhibition (and not the other way around).  After seeing the Chim↑Pom exhibition HERE, I honestly can not imagine any other installation ever having the same effect within these walls. In the afternoon, after meeting more local friends and colleagues, we headed over to Yokogawa cinema for the screening of 'A2-B-C', where a crowd of people from Hiroshima, home to Japan's first nuclear tragedy, were waiting to see a film about Japan's latest. 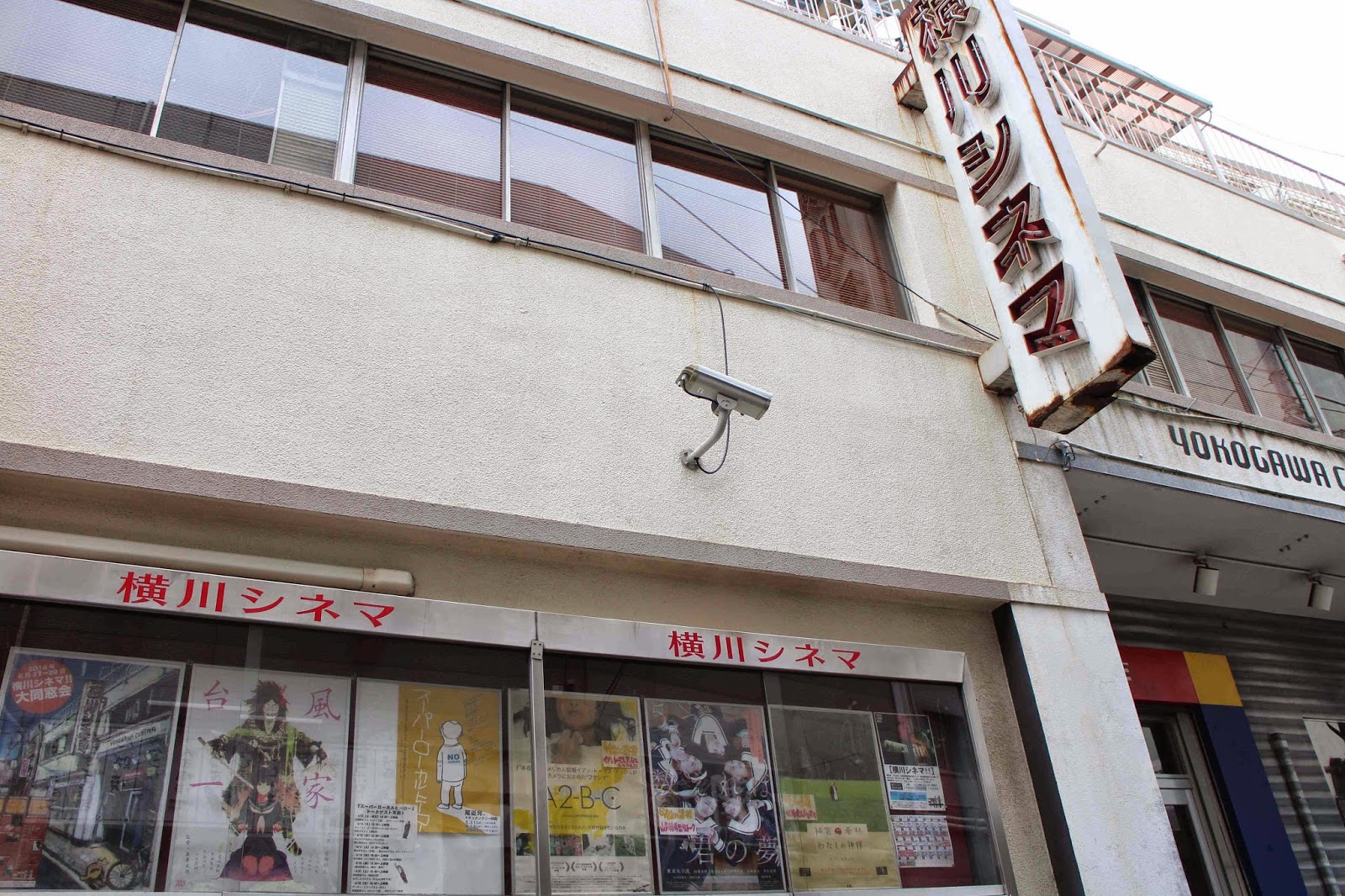 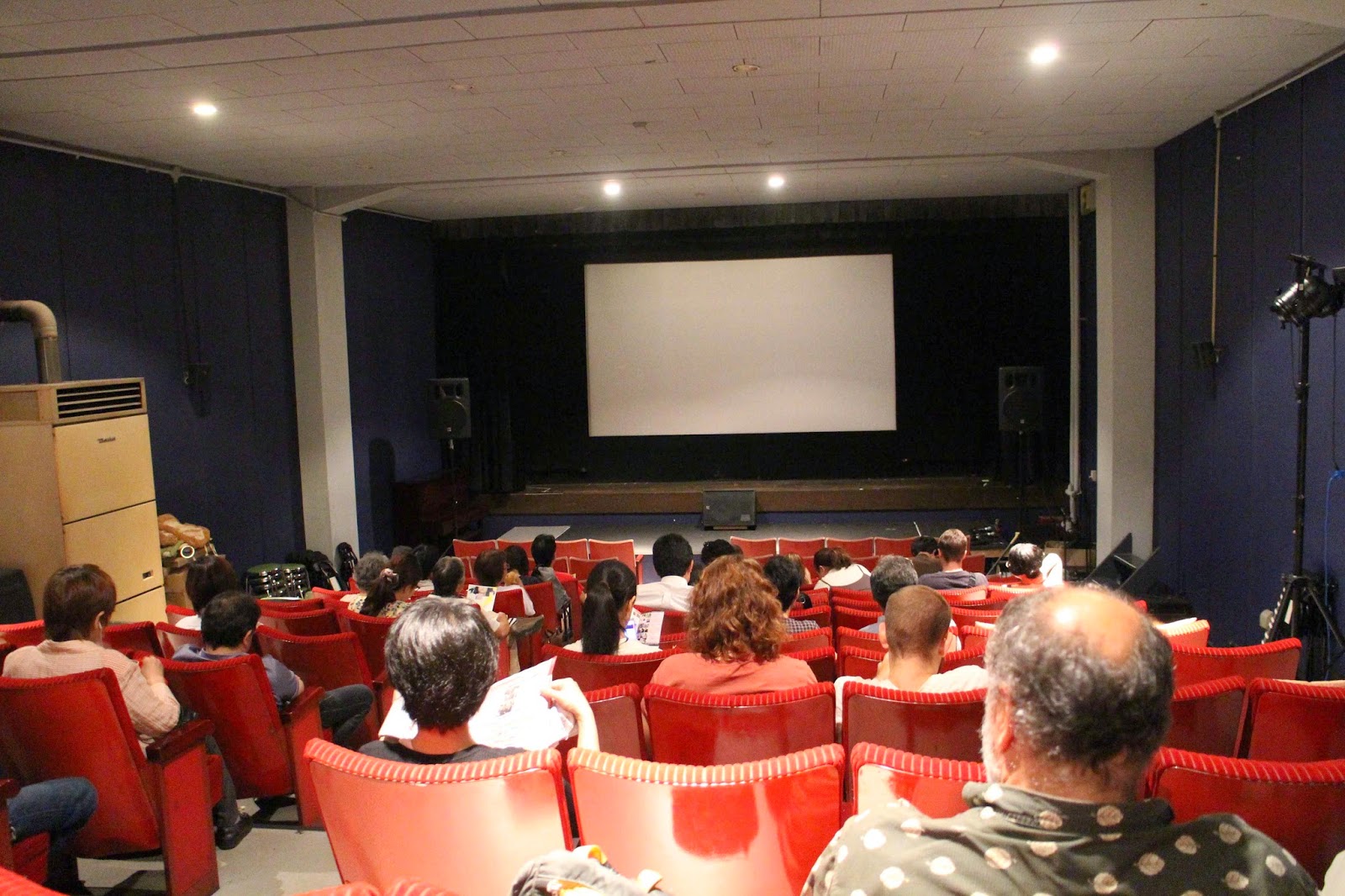 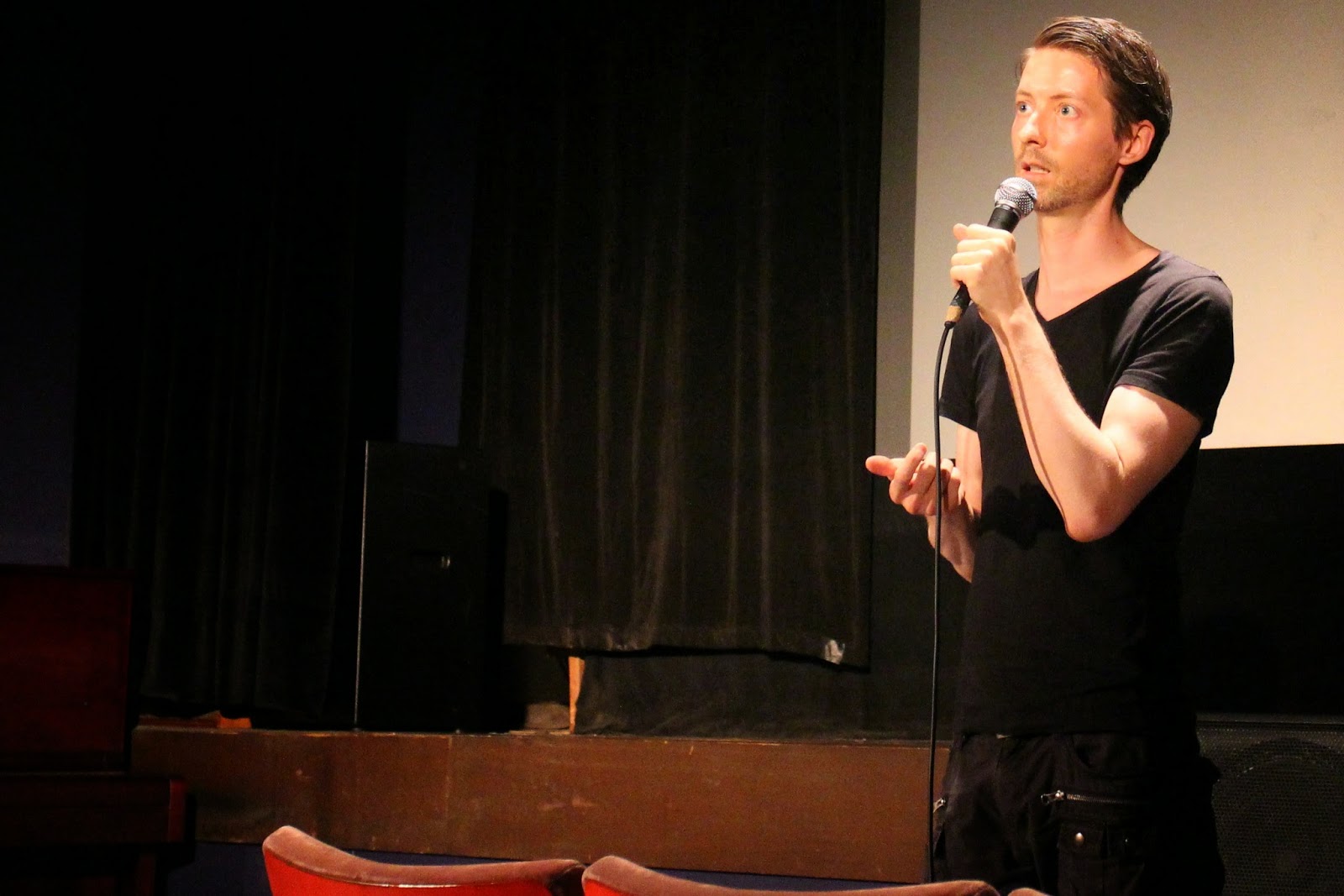 Immediately, following the Q&A of 'A2-B-C', a screening of  'Super Local Heroes', a documentary about people who had evacuated to Hiroshima after the nuclear meltdown in Fukushima, was held.  'A2-B-C' documents people who could not evacuate, while 'Super Local Heroes' documents those that did.  Fascinating!  Unfortunately, I was not able to stay for the film as I had to rush back to the airport to catch a flight, but the director, Tanaka Toshinoru (PHOTO below), kindly gave me a press DVD. 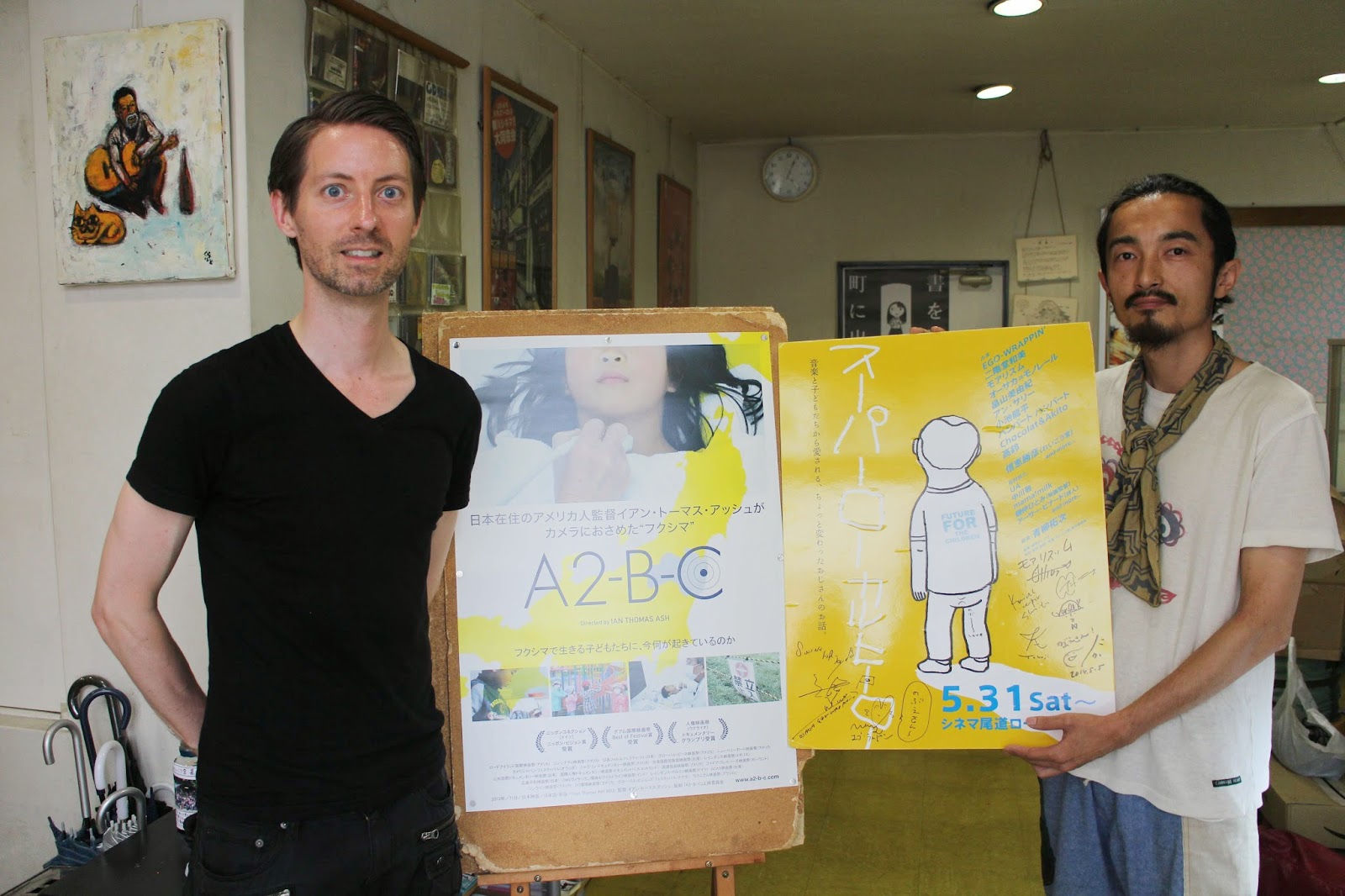 And now, as has so often been the case over the past year, I am decompressing in an airport, writing down my thoughts and waiting for my next flight...
Posted by Ian Thomas Ash at 11:30 pm