Round the Mulberry Bush

Last year,  Mrs. Mutoh and her husband hired private contractors to decontaminate the house where they live with their two children, son, Shougo, and daughter, Rimi.  The levels of radiation did initially decrease, but little by little, they started to increase, particularly on the second floor where the children sleep.

She feels she has cause for concern: both of Mrs. Mutoh's children have been found to have thyroid cysts (that story HERE).

Mrs. Mutoh contacted a local non-profit that offers independent radiation monitoring, and they sent Mr. Fukada.  He started by measuring the radiation levels in the Mutoh's foyer and explained that this is often an area that becomes recontaminated because radiation is carried into the home from the outside on shoes and jackets. 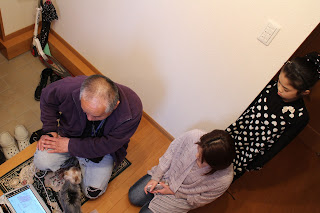 Mr. Fukada then measured the radiation levels in the children's bedroom on the second floor and the study room where the children do their homework after school.  He took measurements both near the floor and close to the ceiling as well as facing towards the centre of the room and then near the windows. 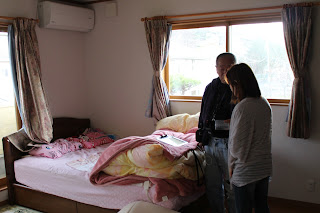 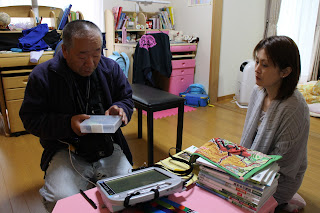 As Rimi, played a video game, Mr. Fukada measured the family's living room.  He pointed at the greenery just outside the window and asked Mrs. Mutoh if it was on her property or her neighbor's.  When she replied that it was her neighbor's, he nodded his head and showed her the measurements.  "Radiation," he said, "can travel 80 meters." 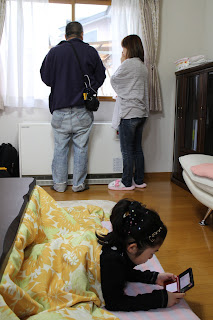 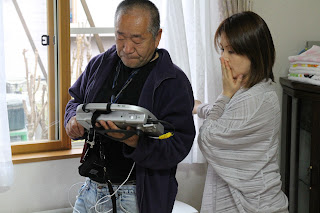 Outside Mrs. Mutoh's house, Mr. Fukada explained that decontamination will not be effective if the surrounding properties are not also decontaminated.  As long as neighbors don't decontaminate their property, including cutting down most trees and shrubs, land that has been "decontaminated" will keep getting recontaminated.

Mr. Fukada pointed the monitor in the direction of the neighbour's yard to prove his point. 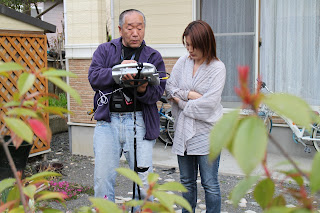 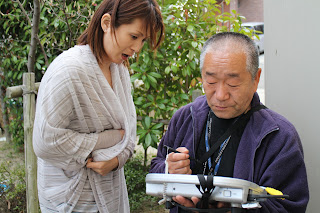 Back in the living room, Shougo and Rimi played while Mr. Fukada explained to Mrs. Mutoh his findings.  The radiation levels in the children's bedroom are indeed twice as high as on the first floor, although still within what is considered "safe" by the local government.  Although people in Fukushima have come to view these levels as a kind of "new normal", he said that if this amount of radiation was found in a public park in Tokyo, there would be a public outcry and a demand for immediate decontamination. 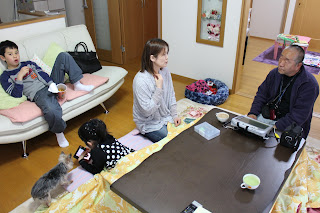