How to "do" a film and World Tour

Since I embarked on the World Tour of 'A2-B-C' last September (WEBSITE), I have circled the globe three times visiting Guam, London, India, Ukraine and many other countries at more than 20 different film festivals.  I am so grateful for this opportunity and humbled by the reception that this small film has received.

Recently some people (and even some of my fellow filmmaker friends) have been unable to resist asking me that personal question that filmmakers do not like being asked: How are you doing this?

"Doing" is a code for "financing", and implicit in this question is the need for people to separate filmmakers into two groups: those that make a living from their films and those who do it as a "hobby", using their own money to pay for their "habit" of making films.

Allow me to put this question into perspective: imagine you're at a dinner party and someone you don't know very well comes up to you and asks, "So, how do you pay your rent?", followed by further probing questions to determine exactly what percentage of your total income is the result of how you spend the majority of your time.  If the percentage is high enough (according to the standards of this person whom you've only just met), there is a respectful nod.  However, if the percentage is too low (or, God forbid, zero), a slight smirk appears across their face and you are dismissed as a hobbyist.

Ironically, this uncomfortable situation is one that even filmmakers themselves put each other into!  I've been asked this question in the green room of film festivals, during meetings of documentary filmmakers, in e-mails and at dinner with friends.

So, how did I "do" my film and the resulting World Tour?

FILM FESTIVALS
While not financial in nature, I am grateful for the support of so many wonderful film festivals.

Having made films for more than ten years now, I am fortunate to have many great relationships with film festival directors and curators all over the world to whom I submitted the rough cut of the film well before it was finished.  Even though 'A2-B-C' was a very different film in the early stages, based solely on the rough cut (and perhaps on my history of delivering a finished film on time) several festivals programmed the film before they ever saw the final cut.  I am so grateful for this support, and the belief these festivals had in what I was doing gave me the strength to keep going and get the film done.

A short documentary about the Nippon Connection Film Festival was recently published, and I am honoured that it includes my interview:

THE MEDIA
While obviously this support is not financial, I could not have accomplished any of this without the support of so many media organizations.

Despite the initial struggle getting Japanese media to cover the film, I am grateful for the early support of foreign journalists and the coverage 'A2-B-C' received in the foreign media, including THIS article in the Press Republican (NY) and THIS one in the Japan Times (Tokyo), both from September 2013.

Having recently marked the 3rd anniversary of the March 11 disaster, several more mentions of my work have been in the news, including an article which appeared in the March 2014 issue of Hong Kong-based Magazine P (screen grab below). 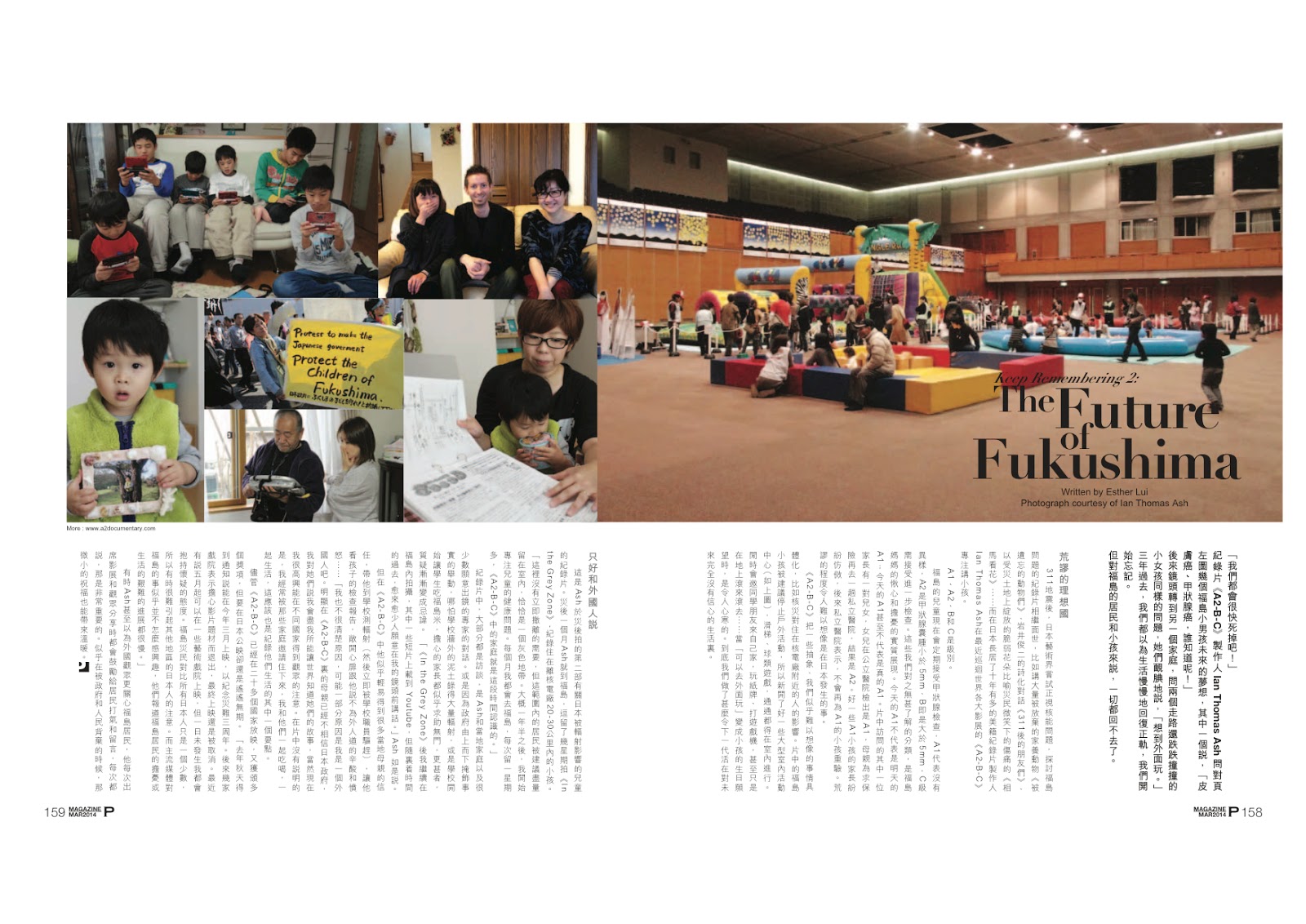 Even the Japanese media has recently begun to cover the film with a mention of 'A2-B-C' in the Tokyo Shinbun Sunday Edition's coverage of March 11 disaster films (published on March 9, photo below), THIS March 14 press release on Eiga.com (the biggest website in Japan for film-related news) which announced the release of 'A2-B-C' in theatres across Japan starting in May, and THIS Tsuhan Seikatsu article that was published on March 18 (screen grab, 2nd below). 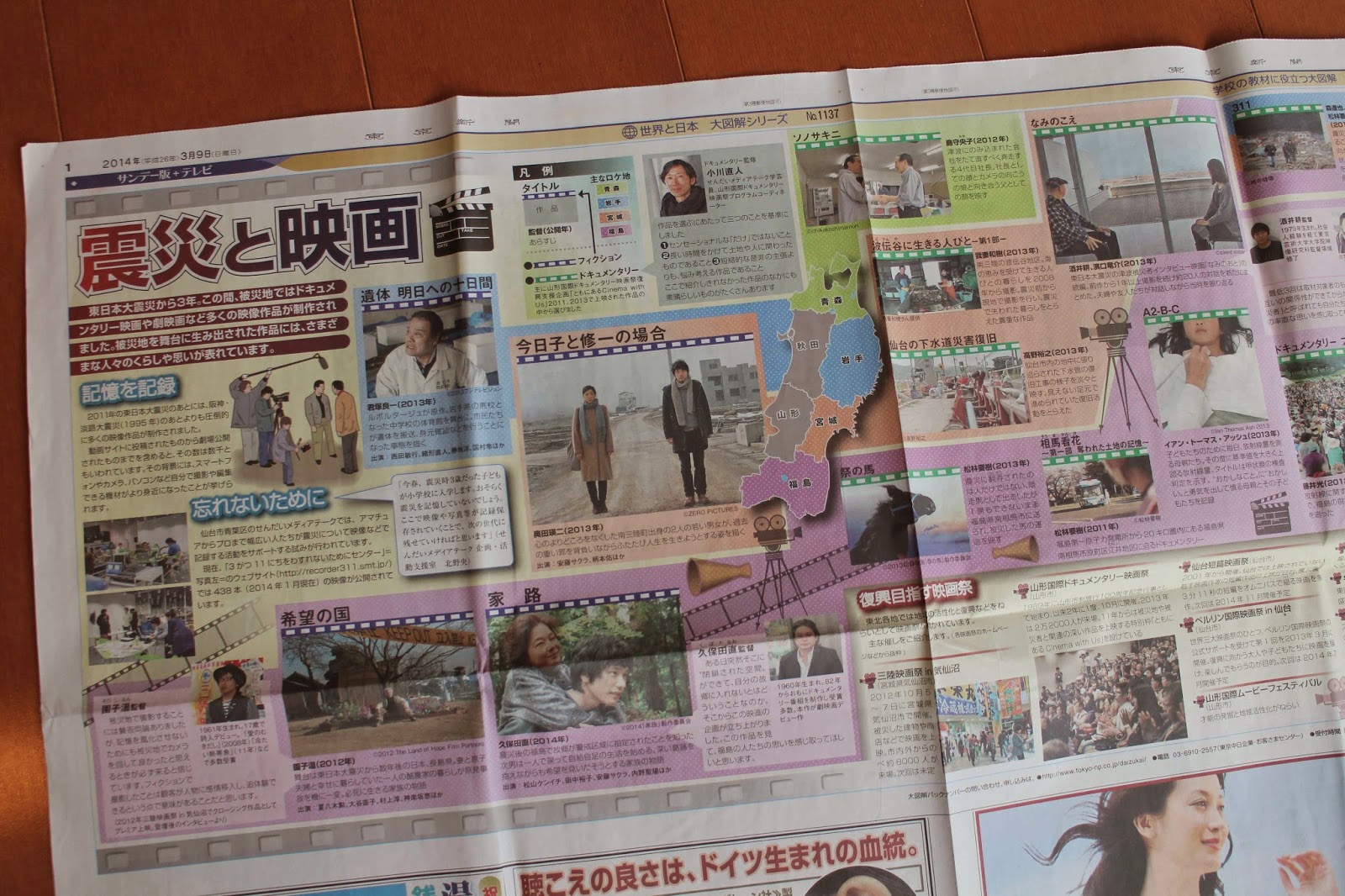 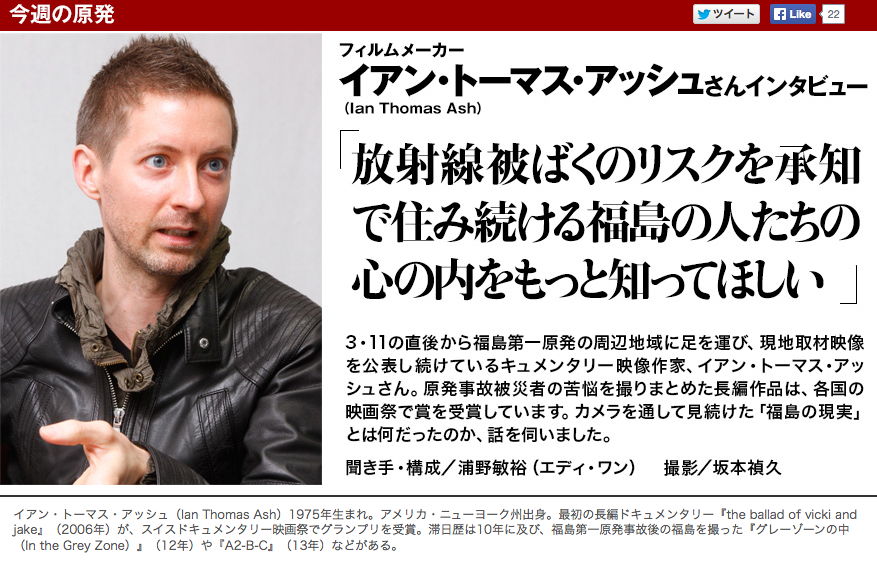 While I am fully autonomous from any group or affiliation and therefore do not receive any funding from them, there are several groups whose work supports mine, both directly and indirectly.

I am so grateful to the International Physicians for the Prevention of Nuclear War (IPPNW) and its member experts Dr. Alex Rosen and Dr. Dörte Siedentopf whose research informs and contextualizes the work I am doing in Fukushima.  (I recently returned from an IPPNW-organized and Protestant Church in Hesse and Nassau-sponsored conference which I wrote about beginning with THIS entry).

In addition, I am grateful for the support of the Foreign Correspondents' Club of Japan (FCCJ), which held a May 2013 press conference for 'A2-B-C' prior to the World Premier (INFO).  As a member of the FCCJ, having the ability to attend press conferences with experts, politicians and news-makers is another great resource for which I am grateful.  For example, I attended THIS March 17 press conference with the Director General of the International Atomic Energy Agency (IAEA) Yukiya Amano, and just today, I attended THIS one with Anand Grover, the UN Special Rapporteur, from which I live tweeted (Twitter account HERE, photo and screenshot below). 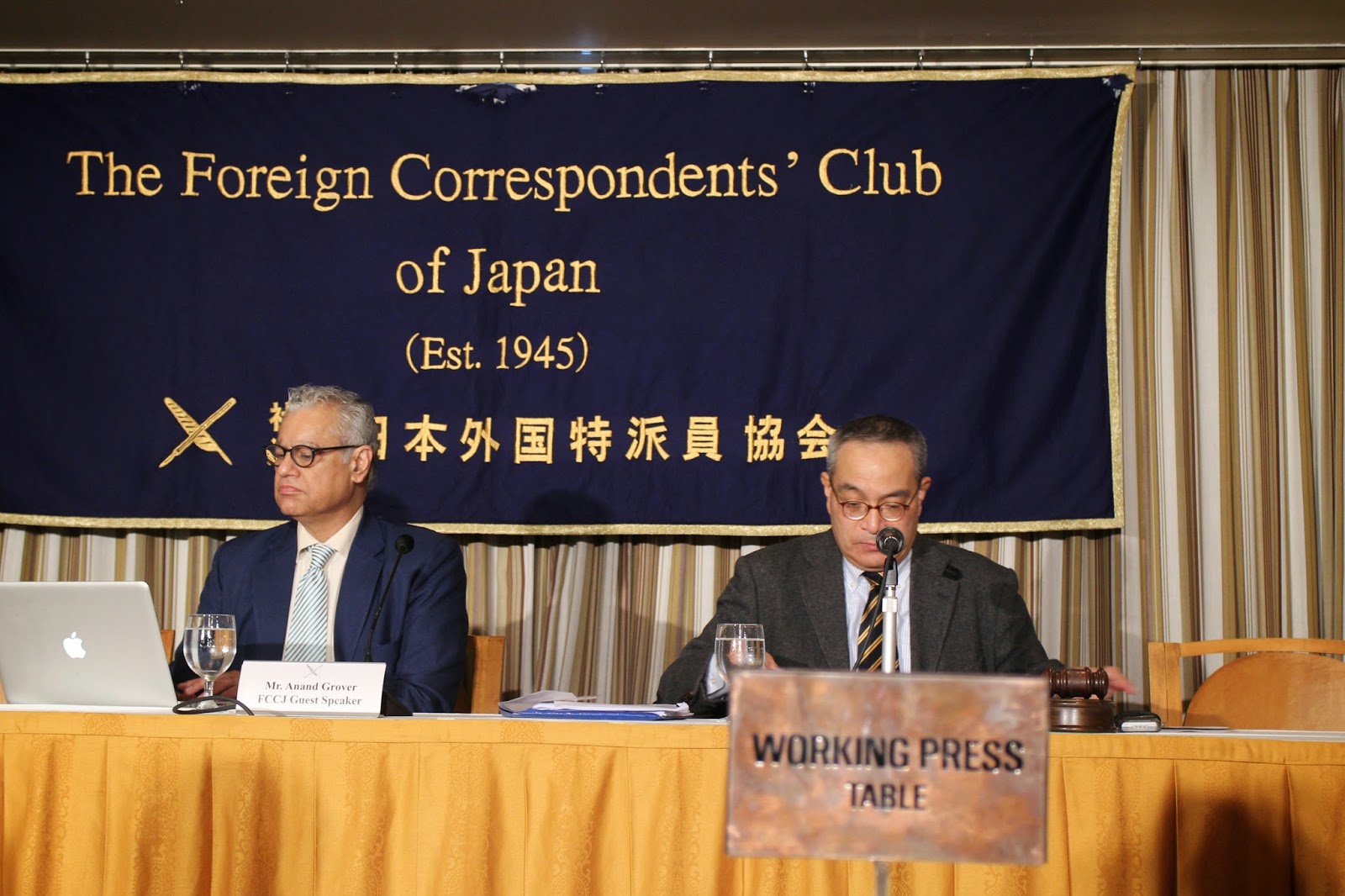 I am so grateful to all of the families and doctors in Fukushima who speak with me at great personal risk.  The families face being ostracized by their government, communities, and even from members of their own family who don't agree with them, while the doctors face obvious professional pressures.  Yet they still choose to speak out and continue to entrust me with their story.

In addition to granting me interviews, I receive many other kinds of support from the participants in the film, including everything from rides to the station (which means not having to rent a car that day) to allowing me to spend the night in the hospital where I am filming (which means not only more access, but also not having to pay for a hotel room that night).


FILM DISTRIBUTORS and FILMMAKERS
To receive the support of fellow filmmakers and film distributors is extremely humbling.  It was the support of Third Window Films (WEBSITE) that made last year's screening of 'A2-B-C' in London's Raindance possible (INFO).  Third Window also helped make it possible for me to attend that screening, and I am grateful for their continuing encouragement (HERE).  My own Japanese distributor is taking a huge risk with 'A2-B-C', a film that lies well outside any of the genres they usually represent.

I am also extremely grateful to my team members Colin O'Neill and Ed Ison, both of whom are amazing filmmakers and who have taught me so many things about making films.  I am also grateful for fellow filmmaker Ivan Kovak's advice, which he gave me just in the nick of time on the day before we locked picture on 'A2-B-C' (!) and I believe helped to change the trajectory of this film.

FRIENDS and FAMILY
Without the support and encouragement of friends and family, I wouldn't be able to do anything.  I am so grateful for the support I have received over all the years and especially during the three years since the March 11 disaster.  This support includes encouraging messages of love, care packages from home, and, yes, even help with airfare as I attend film festivals that have big hearts but small budgets.

SUPPORTERS
From time to time, I am offered much-needed help for which I am extremely grateful.  This support usually comes when all I have left is the faith that I am doing the work I am being called to do, but no idea how I am going to continue financing it.  This support is always exactly what I need exactly when I need it, never any left over but always enough.

I will not name them here, but I will be forever grateful to them, these supporters who have helped to make it possible to share the story of the families and children living in Fukushima with people all over the world

HOW TO "DO" A FILM AND WORLD TOUR
So, how do I "do" what I do?  To be honest, I still don't know exactly how I have been able to do all that I have over the past year.

All I can say is that I didn't do any of it by myself, and that making films, like everything in this life, takes faith, prayer and gratitude.
Posted by Ian Thomas Ash at 7:13 pm

I'm one of the friends/filmamkers guilty of asking you.
Apologies for offending you obviously not my intention.
It was my sense of awe that you've managed to pull off your world tour that forced me to ask.
I won't ask again that's for sure ;)

That was not directed at you, one of my real friends and someone who is actually making a living making films. I know more than a few filmmakers would like your advice on how to get real paid jobs!