Last week, I attended the International Physicians for the Prevention of Nuclear War (IPPNW) congress "The Effects of Nuclear Disasters on the Natural Environment and Human Beings" (INFO) which was sponsored by the Protestant Church in Hesse and Nassau.  I wrote about this experience in detail beginning with THIS entry.

My first contact with IPPNW was one year ago when one of my photographs of a child in Fukushima receiving a thryroid sonogram was published alongside an article by IPPNW member doctor Alex Rosen in the March 2013 issue of IPPNW Forum (HERE).  This coincided with the 2nd anniversary of the nuclear disaster in Japan.

Earlier this year, Dr. Rosen asked me to write an article for the March 2014 edition of the journal about the so-called Secrecy Law which had been recently passed in Japan.  In this month's IPPNW Forum, along with several articles marking the 3rd anniversary of the nuclear disaster in Fukushima, my article was published in German under the title "Interpretationssache Staatsgeheimnis" or "Interpreting Secrets" (LINK).

The English text, edited by Sara Lushia, is below. 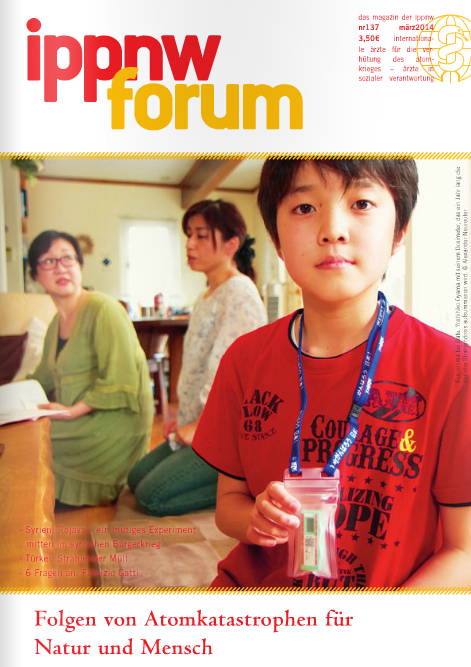 In November of 2013, in the midst of a global tour with my documentary film, ‘A2-B-C,’ which focuses on the children living in Fukushima after the nuclear meltdown, I attended a press conference at the Foreign Correspondent’s Club of Japan. The conference was held by Social Democratic Party member Mizuho Fukushima, Mr. Sohei Nihi of the Japanese Communist Party, Mr. Ryo Shuhama of the People’s Life Party, and Independent lawmaker Taro Yamamoto.  They were in opposition of the then proposed “Designated Secrets Bill,” which, if passed, would grant the Japanese government the power to arrest, imprison and/ or fine anyone accused of revealing “state secrets”.

What exactly would be considered a “state secret” under the proposed bill?

Speaking at the press conference, Mizuho Fukushima shared that she had asked that very question of the lawmakers in the ruling party, and the reply she received had alarmed her:  “What is considered secret,” she was told, “is secret.”

In response to the proposed bill, the president of the Foreign Correspondent’s Club of Japan, Lucy Birmingham, published a statement of protest:

The "Designated Secrets Bill" specifically warns journalists that they must not engage in "inappropriate methods" in conducting investigations of government policy. This appears to be a direct threat aimed at the media profession and is unacceptably open to wide interpretations in individual cases. Such vague language could be, in effect, a license for government officials to prosecute journalists almost as they please.

The law proposed by this bill would ostensibly protect issues deemed to be of national security.  However, the Japanese government’s intentions were called into question when it used recent cases of whistle-blowing abroad as examples of why such a law was needed.

The bill’s introduction and debate coincided with the awarding of the 2020 Summer Olympics to Japan, even as news continued to trickle out about continuing problems at the damaged nuclear power plant in Fukushima.  Adding further potential for the Japanese government to face embarrassment on the international stage, the results of the Fukushima Health Management Survey, which is being overseen by the government, had recently revealed 58 cases of suspected pediatric thyroid cancer in children living in Fukushima (as of publication, the number is now 75, with 100,000 children still be to tested).

With my recent filming being almost exclusively in Fukushima, some of my friends and colleagues began telling me to “be careful,” whatever that was supposed to mean.  How can you “be careful” when you don’t even know what you aren’t supposed to be doing?

Late one night last December, as the ruling party forcibly rammed the Designated Secrets Bill through before the Diet went into recess for the New Year holiday, I was reviewing footage for my new documentary about children living in Fukushima.  Would work like mine, interviewing doctors in Fukushima, collecting data and recording testimonies, be considered a “state secret”?

I had good reason to be asking myself this question. After living in Japan for many years, last summer the application for renewal of my working visa was suddenly denied.  Although I have no proof that there was any connection, my visa renewal was denied just two months after I had returned with a major award from the Nippon Connection Film Festival in Frankfurt, Germany, where the World Premier of ‘A2-B-C’ (2013) had taken place.

I hired an immigration lawyer, and through an appeal process my working visa was eventually renewed; but just for one year, not the typical three.  Several people advised me to “lay low” for the next year until the visa was renewed again, after which I would technically qualify to apply for permanent residency.  By “lay low,” I inferred they meant to stop filming anything related to Fukushima.

At the press conference before the bill was passed, Independent lawmaker Taro Yamamoto had expressed his disbelief at the lack of media coverage the proposed bill was receiving.  “By not providing coverage of this bill,” Yamamoto had said, “the media is putting a noose around its own neck.”  Sadly, his prediction seems to have come true.

Before the designated secrets bill was even passed into law, its affect was already being felt.  Professional journalists and newspaper editors, bloggers and social media users were asking themselves “could what I am about to publish be considered a ‘state secret’?” and then weighing how much risk they were willing to take.  The bill had yet to become law but it had already motivated the people it was meant to control to start controlling themselves through self-censorship.

There is no way to know if my continued filming in Fukushima puts me in danger of unwittingly revealing something considered a “state secret.”  Every day that I continue to document the ongoing situation, I do so knowing that it could possibly affect my ability to remain in the country that has been my home for more than ten years.

Yet, if it is the work I do in Japan, this country I so dearly love, that causes me to be unable to remain here, then I will have no choice but to leave; for ceasing the work I am doing in Japan simply so that I can remain here would be stepping back and silently witnessing Japan turn into a country in which I would no longer wish to live. 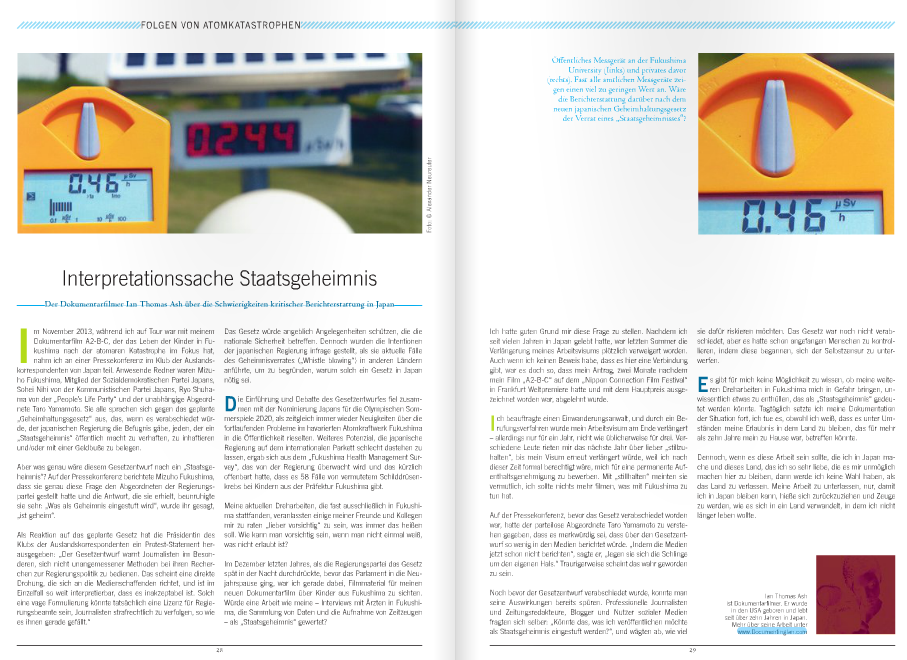 We hear about these kind of things, but it's always happening to someone we don't know and believe in.

It seems like governments are hell bent on making a fool out of themselves.

This time it'll be Japan's loss.