Putting It Where Your Mouth Is

Now it has become a fact of life to see signs in supermarkets such as this one (via NYT reporter, Hiroko Tabuchi). 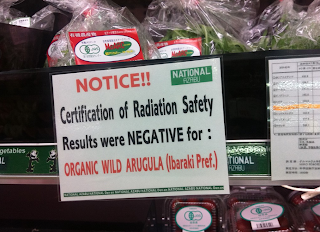 Additional stories in the news this week raise questions about the safety of our seafood (here, via Bloomberg) and indeed of our entire food chain (here, via The Japan Times).

The JP gov'ts motto in monitoring food supply for radiation seems to be: The economy first. The people's health second.

What choice do we have, but to trust the government to monitor our food supply... the same government which is a party to the silencing of the truth such as this:

What is our choice? What alternative do we have but to hope that the government has the people's best interest at heart and are diligently monitoring the food supply?

I wonder what the bureaucrats in Tokyo are eating. Are they as worried about the food supply as the people they serve? What are they feeding their children and grandchildren?

This story from Reuters outlines the worries and potential threat to this year's rice crop. Let's hope the central government can get on top of this issue to determine the safety of rice- a staple food of the Japanese diet- before it goes to market... unlike they were able to do for beef. 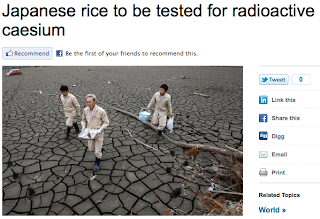 Posted by Ian Thomas Ash at 7:43 pm No comments:

This week has already been filled with news stories that have caught my attention... and it is only Tuesday.
A video that is going viral (as far as news-related videos in Japan are concerned) is one that shows the growing anger against Tokyo bureaucrats among residents of Fukushima Prefecture. Called "Japanese Government Killing Its Own People" the title is the least shocking thing about it.

The tactics that were used against the politicians in order to prove the point are certainly debatable, but in this country where traditionally "the nail that sticks up gets hammered down", it is refreshing to see people standing up for their rights and challenging authority.
And in stark contrast to this May 31 article which describes senior citizens volunteering for what is described as a "suicide corps" to help bring the damaged nuclear plant under control is this:

A man in his 20's who is sacrificing his future to do the same thing. 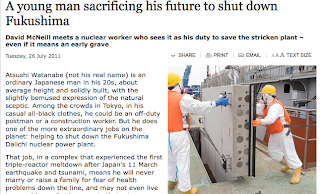 Posted by Ian Thomas Ash at 5:46 pm No comments:

Another Cry For Help From Minamisoma

One of the things that first made me interested in going to Minamisoma to film was the video that the mayor of Minamisoma posted to YouTube on March 26 in which his plea for help as his town was virtually abandoned by the central government was heard around the world and earned him a place in Time's most influential people list.

I had been looking forward to meeting the mayor and interviewing him. I wanted to ask him how he would use his newly found fame to help the people of his town; how he would go up against the government machine that was already putting policies in motion that would cover up and deny the severity of the threat against the people- and especially the children- of his town.

When I received the opportunity in April to interview Mayor Sakurai, I was disappointed to learn that as quickly as he had become an advocate for his people, he had seemingly reversed 180 degrees and was answering questions in the same "government-speak" we had all gotten used to from the central government.

He denied there was any threat to the children and asserted that the children could safely play outside (a portion of this interview in which he makes this claim can be seen here in the trailer for my film).

When I heard Mayor Sakurai address the Foreign Correspondent's Club of Japan last month, his new message was even more honed and clear: he was to start new programs to invigorate the local economy and try to bring the citizens who had evacuated back to the town (putting these goals, in my opinion, ahead of the safety of his town's children).

Meanwhile, as I have written here recently, the government is looking for ways to DECREASE the evacuation zone even while new HOTSPOTS are being announced and additional citizens are having to make the decision as to whether to evacuate or not.

Unable to bear this crazy situation any longer, a local city council member has taken a page out of Mayor Sakurai's book and posted a video on YouTube on July 18 asking for the government to come to its senses when making policies that affect the children of this area (Time article can be found here with the video below).

Interestingly, the council member, Koichi Ooyama, had granted me an interview back in April. At that time, however, he would not speak to me on film as a city council member. He did agree, however, to be filmed as a citizen and as a father. A well-respected local potter, he introduced himself to me by his artist name of "Sato" and that is the name under which he appears in my documentary. Apparently as the months have passed and the gravity of the situation and how it will affect the children has become more understood, "Sato-san" realized that the message that he gave during my interview needed to be given again... this time to the world as City Councilman Ooyama.

Mayor Sakurai's March 26 video message to the world can be seen here:

Posted by Ian Thomas Ash at 8:21 pm No comments: 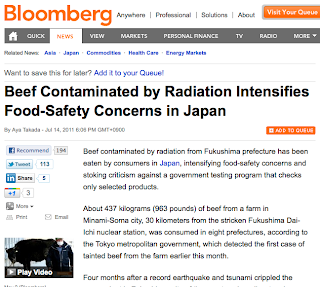 With the unfolding (unraveling) story of radiation-contaminated beef making it to market and being consumed, I am left almost numb at the prospect of what this means for all the other products in our supermarkets. If the "checks" didn't work for the beef...

There are fears (both justified and not) about eating products from Fukushima Prefecture, the home of the damaged nuclear power plant. But let's be honest: the radioactive particles have been blown all over the place and are not contained in neat little circles drawn with a compass by a bureaucrat in Tokyo.

A Japanese friend said to me yesterday: "It isn't just the beef, is it." The Japanese people around me are just now figuring out that they have been lied to. And yet many others would rather believe that it is just the beef.

Are the checks being carried out on our vegetables? How about the fish and seafood that may have come into contact with the radioactive water that was dumped into the ocean? What about this year's rice crop? And our water supply? Shall I mention what is in the air and rain?

Some might say that the amounts of radiation being found in the food supply are, at the moment, small. But let us not forget that our annual exposure to radiation is calculated as our TOTAL cumulative exposure. 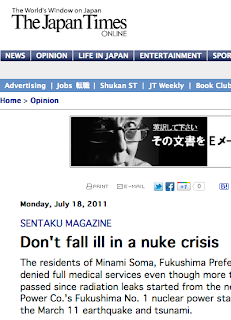 And this is the same government that is talking about easing the restrictions on the zone 20-30 km from the nuclear power plant (a decision that is is in my opinion both premature and dangerous) and yet still can't even figure out how to give the people living there access to full medical care.

The residents of Minami Soma, Fukushima Prefecture, are still being denied full medical services even though more than four months have passed since radiation leaks started...the primary reason for this denial is "buck passing" by the central and prefectural governments.

This is just another shocking example of governmental impotency.

(Note: I would like to thank Katsuyoshi Ueno who is on Twitter @44de256 and is a great source for all the latest news stories on what is happening in Japan.)
Posted by Ian Thomas Ash at 7:18 pm No comments: 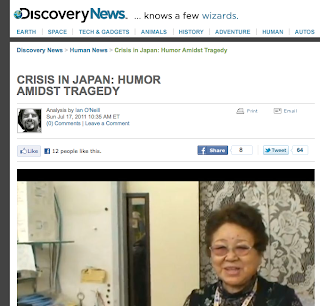 Discovery News has just published my guest blog about finding humor amidst the tragedy of Japan.

The events of March 11 have taken away so much, but they haven't taken away our ability to laugh.

Posted by Ian Thomas Ash at 6:56 pm No comments:

The week in news. 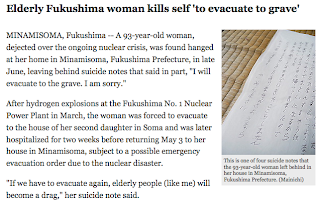 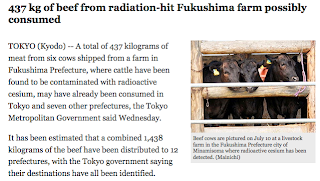 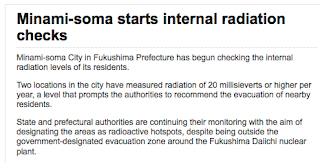 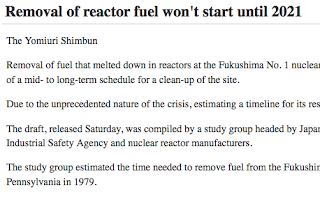 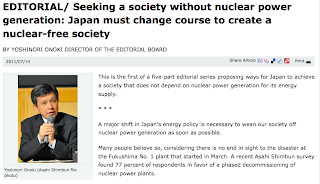 Posted by Ian Thomas Ash at 8:26 pm No comments:

It has already been four months.

It has only been four months.

Which do you feel?

Until we are healed, how long will it be?
Posted by Ian Thomas Ash at 4:41 pm No comments:

Radiation in the news 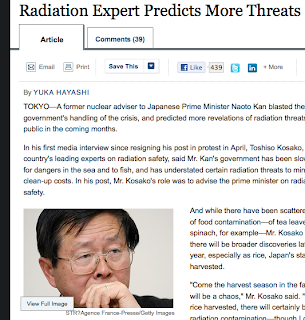 For those of us in Japan, the daily news of radiation being found in the food supply (both in vegetables and in seafood) brings with it more questions and (justified or not) more worry.

In this article from the Wall Street Journal, former nuclear adviser Toshiso Kosako provides a grim prediction of what is to come when the autumn harvest begins in a couple of months. 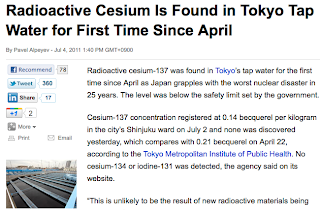 And this article from Bloomberg, reports that radioactive cesium has been found in Tokyo's water supply for the first time since April. The amount is small, but given that it is the cumulative exposure to radiation that is worrisome and given that we still don't know ALL the sources of radiation that we are being exposed to on a daily basis, what is a level of radiation that can be considered safe?
Posted by Ian Thomas Ash at 3:55 pm No comments:

In the last (for now) part of my Gallows Humour series, a middle-aged man finds something other than genetics to blame for going bald.
Posted by Ian Thomas Ash at 8:05 am No comments: