Too Hot to Not Eat Crow 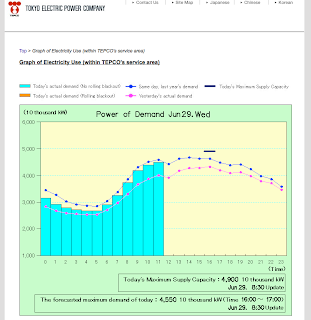 During the cold months after the March 11 earthquake and tsunami, we faced rolling blackouts due to the shortage of electricity that followed the meltdown at the Fukushima nuclear power plant.

Now that the summer heat is in full force, the increased use of air conditioning again threatens to max out Tokyo Electric Power Company's (TEPCO) ability to provide enough power.

To help keep us aware of the continued need to conserve energy and ever mindful that blackouts are again increasingly possible, TEPCO has taken to publishing online each day's power usage in a handy chart. Now the stress of blackouts isn't only reserved for when they happen, but it can be enjoyed all the time by worrying about the possibility of them happening... in real time! Thank you, TEPCO!

I have been too proud that I haven't used my heater or air conditioner since the March 11 disaster. Today, it is 90F/ 32C and I have just broken down and am using my air conditioner for the first time.

Eating crow and contributing to potential blackouts never felt so refreshing. Is this the beginning of the end?
Posted by Ian Thomas Ash at 1:08 pm No comments:

The title says it all. This is Gallows Humour part 3.

May I present to you: Tsunami vs. Car GPS (Tsunami wins)

The earthquake, tsunami and nuclear meltdown have taken away so much from so many people in Japan. We simply cannot allow the events of March 11 to take away our sense of humour as well. We can still laugh.

May I present to you: Grandma vs. Earthquake (Grandma wins)

"This is not politics, it's life or death." The Tokyo Times' published an article today by Richard Smart about the documentary I am currently editing.

I am really overwhelmed by the support and interest I have been receiving from so many people.
PARENTAL ADVISORY: There are a couple of naughty words (in direct quotes) in the article. Honestly, some people have no manners.
Posted by Ian Thomas Ash at 9:15 pm No comments:

The missing are still unfound.

The dead are buried.

The buildings will be rebuilt.

And we are changed forever.
Posted by Ian Thomas Ash at 9:47 pm No comments:

The earthquake, tsunami and nuclear meltdown have taken away so much from so many people in Japan. We simply cannot allow the events of March 11 to take away our sense of humour as well. We can still laugh.
May I present to you: The Reporter vs. Radiation 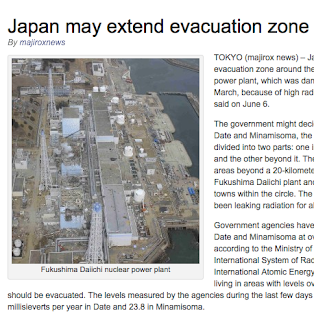 Wow. I can't wait to hear what the mayor has to say tomorrow.
Posted by Ian Thomas Ash at 10:36 am 2 comments: 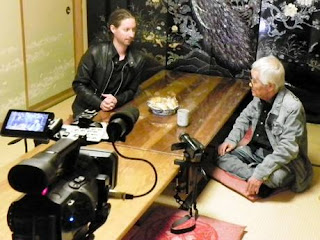 Season one, on which I am a producer and the onscreen director, has 10 episodes and will run until March 2012. The series is produced by Tochipro, and the first episode airs next month.
Posted by Ian Thomas Ash at 10:04 am No comments:

A little gallows humour, the intro

I have been focusing on some of the really sad and difficult issues related to the continuing problems at the damaged nuclear power plant in Fukushima. I have been struggling with my feelings and trying to find a balance between filmmaker and activist (I am a filmmaker) and my public vs. private life.

Going through the footage (so much of which is frustrating/ sad/ unbelievable) I have found a few really funny moments... no doubt I will be leaving myself open for criticism about how inappropriate it is to laugh at a time like this. I will soon be posting a series of 'funny moments' that won't be making it into the film, but nonetheless will provide some needed respite from all the evils of the world.

I am NOT an expert on radiation or on interpreting the radiation data. I also believe that the numbers are like the Holy Bible: open to interpretation and used by different people to support whatever view they already have.

Therefore, I am not going to present any specific radiation amounts here. I am simply going to provide a few observations (as I see them) about the numbers themselves and how those numbers are reached:

2. Likewise, any calculation that determines that "the current amount of radiation is X and therefore the annual threshold for radiation exposure will not be surpassed" does NOT take into account INTERNAL exposure. That is, the irradiated vegetables that people (in Iitate Village, for example) were eating for up to TWO MONTHS before they were evacuated. They were not immediately evacuated because they were 40 kilometers away from the nuclear power plant and therefore technically outside of "the zone". Unfortunately, the wind carried the radiation WELL BEYOND the 30 km circle the government drew on a map. This internal exposure also includes the irradiated water the children drink and also the dust they inhale when they walk/ play outside.

3. The Japanese government has raised the accepted level of annual exposure of radiation for children to 20 TIMES THE NORMAL AMOUNT. With these new limits, the area which must be evacuated (and therefore compensated for evacuating) is GREATLY decreased. And yet NO EXPERT can say for certain what the actual risk for the children will be when exposed to this new amount.

4. There are not enough people or Geiger counters to measure each school accurately. The government currently takes measurements in pre-decided locations in the schools. For example, the entrance, the lunchroom, a classroom on each floor, and in the school grounds. However, radiation spreads UNEVENLY and even within the same classroom HOT SPOTS can exist. That is, the level of radiation near a window may be MUCH HIGHER than within the middle of the SAME classroom. Likewise, an area directly outside of the school building may have MUCH HIGHER levels of radiation than in the school grounds because of the way rainwater falls off the roof and gathers in certain spots where students may pass. Therefore, in order to ascertain the safety of a school, the ENTIRE school must be monitored for dangerous HOT SPOTS of radiation. This is NOT being currently done.

Am I fear-mongering as some might suggest? To answer that question, ask yourself this:

Would you allow your child to live in these areas of increased radiation under orders to stay indoors because of the risk of exposure to radiation if they went outside?

Would you allow your child to both drink and bath in water which contains increased levels of radiation because the levels would still allow for staying within the RECENTLY INCREASED safety limits?

Would you allow your child to attend a school that was merely 2 km from a school that could not open because it is in an area deemed to have levels of radiation that are too high? Keep in mind that this school is also located just 32 km from the damaged nuclear power plant that is still CURRENTLY emmitting radiation and is still NOT under control.

Would you trust a government that told you the levels of radiation were safe when this is the same government that had not provided you with the information that there had in fact been a nuclear MELT DOWN or that areas OUTSIDE the 30 km zone needed to be evacuated until two months after the fact?

I invite all of those people who suggest that I may be overreacting to pitch a tent in these areas and live there for the next year. Drink the water and eat the vegetables. Oh, and bring your children, too. Don't have any children yet, but plan to someday? Don't give your sperm or eggs a second thought. After all, you have the government's word that it is safe. 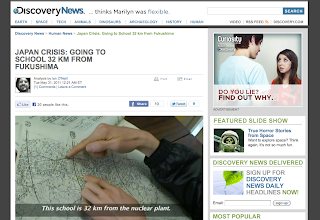 I am really honoured that Discovery News has published my 7th guest blog. Having Discovery News carry these blogs means that many more people who would not otherwise know about these issues are watching.

Thank you, Discovery News, for keeping the story of the children being affected by the radiation in the news!
Posted by Ian Thomas Ash at 7:15 am 2 comments: