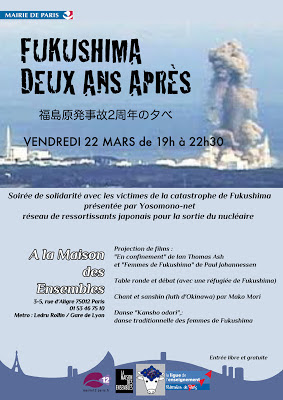 Posted by Ian Thomas Ash at 2:20 pm No comments:

A couple of months ago, I had wondered how I would spend the day.  Coincidentally, today turned out to be the last day I would be editing my documentary "A2" (WEBSITE), about the children living in Fukushima.  I have just now handed the film over to the post-production team in the UK.

It's bittersweet; I suppose like sending a child off to university.

I am honoured that Discovery News' March 11 anniversary coverage includes my guest blog (HERE), the 10th one I have written for Discovery since the earthquake struck two years ago, and it is also linked to the short documentary I compiled for today (HERE).

And today began with the humbling news that "A2" has been accepted in a competitive film festival in Europe in June.

On March 13, 2011, two days after the devastating earthquake and tsunami in Japan, I described the situation in Tokyo in an open letter to my friends and family (HERE).  I posted it along with a short documentary about panic buying and the following explanation:

I simply couldn’t stay inside today and just watch the news coverage, so I took my brother-in-law’s advice: I took my camera outside to see what was happening in my neighbourhood. The result is (this) ten-minute video about “panic buying”.

I could never have imagined at the time that this would be the first in a series of short documentaries that would eventually evolve into two feature films documenting the nuclear crises in Fukushima spanning the following two years.

As the two-year anniversary of the March 11 disaster approaches, I find myself reflecting on how it all unfolded.  As part of this reflection, I have re-visited my early documentaries and edited them together to see how my journey began.

The short films that I made during the first ten days of the crises document the path I took trying to understand the March 11 earthquake, tsunami and nuclear disasters.  Re-examining this journey is helping me to understand where to go from here; for although we move forward, we must not forget from where it is that we began.