***** UPDATE February 7, 2017 *****
"Suturing Cultures" is now On Demand free until Feb 20, 2017. Link HERE
**********
Leading up to the broadcast of my new documentary "Suturing Cultures" (STORY), which will be premiering across the globe on the NHK World channel and website in a couple of days (broadcast INFO), I was asked to produce some promotional materials including a preview/ trailer and "director's interview".

For the "director's interview", I was told:

This is relatively free style. The director can speak about his motivation for making this documentary. You could also introduce yourself and speak about your social background, interests in general, etc.

After watching a few of the other director interviews, I decided to follow their approach of a piece-to-camera talking about their film and why they made it interspersed with footage from their documentary.

Asking my friend to film so I could concentrate on what I wanted to say, I still could just not get it to come together in a natural or interesting way.  While I knew I was supposed to talk about my motivation for making the film, I also realized I didn't truly understand the full source of those motivations.  But I did know someone who might...

Re-reading the brief, the words "free-style" jumped out at me, and I decided to follow my heart.  I messaged my sister and when she called, I started recording.  Using old family photos to illustrate our conversation, the result has just been published and can be found on the bottom of the NHK World film page for "Suturing Cultures" (HERE) along with a preview for the film. 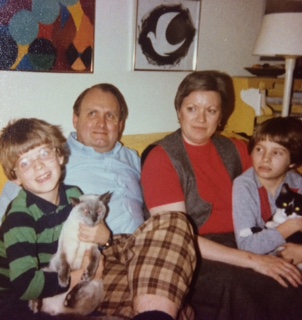 Posted by Ian Thomas Ash at 1:47 pm No comments:

Imperial Hospitality (Part 2): Stories from The Imperial’s Bars and Lounge

In the background, I am always working on a project or two in addition to whatever is in the forefront.    Earlier this week I shared about my documentary "Suturing Cultures" which will be airing next week (story HERE and broadcast info HERE), and now I am pleased to share the next installment in the documentary-style series of videos I was asked to direct for the Imperial Hotel Tokyo, a luxury hotel with a deep-rooted history in Tokyo.
Featuring a tour of the Imperial's bars and lounges and filmed/ edited back in December, Part Two was published this week (with my accompanying column on the Imperial website HERE, a direct link to the video below, and more info on Part 1 HERE):
It is only through the support of an awesome team that I can be working on so many projects at once, and I would like to give a shout out to Matsudaira Naoyuki who shot and edited this piece.  While I wrote the music which is the same piece we used in Part 1, it was treated to a jazz arrangement by Onuki Yuichiro, who was also on piano, joined by Tani Motoaki on bass and Adachi Hiroshi on drums. 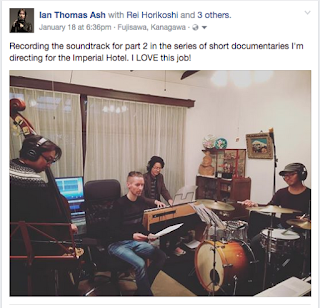 Part 3 is scheduled to be published in March.
Posted by Ian Thomas Ash at 9:15 am No comments: