Yesterday, as is Buddhist tradition, Mr. Hata's burial took place 49 days after his death.  Held in a forest deep in the countryside of Japan, it was one of the most unusual burials I have ever had the honour of attending.  A description with accompanying photos is HERE. 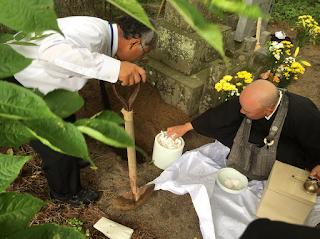 In April, I shared about the honour I had in reuniting a dying man with the son he had not seen in 30 years.  I published a photo-documentary about their reunion called "Mr. Hata and T" (story and photos HERE).

Three weeks to the day after being reunited with his son, Mr. Hata died peacefully in his sleep.  I collected some thoughts, photos and words of condolences in a post-script HERE.


Thank you all so very much for sharing in Mr. Hata's story, for your kind words of support and condolences, and for sharing about how his story has affected you personally.  May we carry with us the lessons he has left with us as we continue on our journey of life.
Posted by Ian Thomas Ash at 9:27 am No comments:

In June 2013, my film 'A2-B-C', about children living in Fukushima (WEBSITE), was awarded at the World Premier in Germany (STORY).  After a world tour of over 25 festivals and several awards later, the film came home to Japan, and the following spring enjoyed what would eventually turn out to be a 6-week residency at the PolyPoly Higashi Nakano theatre in Tokyo ahead of a country-wide cinematic release (STORY).  After the last screening at the cinema in Tokyo ended with a bang (STORY), 'A2-B-C' then went on to have a second life in so-called "private screenings", also called "four-walling", until all distribution for the film was abruptly and unceremoniously cancelled in March of last year in a move that was seen as some as an attempt at censorship (STORY).  Six months later, the private screening process was re-established, and the film could once again be seen in Japan (STORY).

Last autumn, I had the honour of attending and speaking at several of these screenings, although with my recent filming and editing work, including the follow film to 'A2-B-C' (STORY), I have not been able to attend a screening of the film for several months.  Yesterday, there was screening of 'A2-B-C' in Tokyo, and although I was not scheduled to attend, I decided to surprise both the audience and the organizers by showing up moments before the film ended.  The organizers were shocked to see me, but welcomed me warmly and asked me to speak to the audience before the post-screening discussion.  It was an honour to speak to the audience, and share with them about the filming I have been doing in Fukushima in the more than three years since filming on 'A2-B-C' finished. 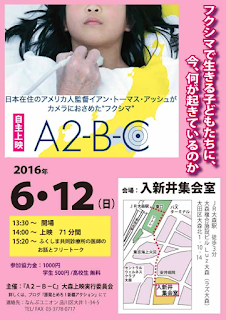 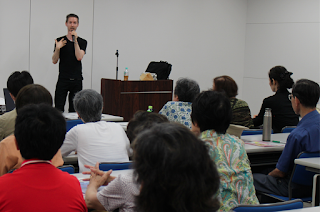 In the evening, I attended a symposium about affects on human health and Fukushima.  One of the presenters, Dr. Ushiyama, is one of the founders of the 311 Thyroid Cancer Family Group (STORY), and for even those who have been studying the problems in Fukushima since the beginning, the symposium was filled with eye-opening information based on research from Chernobyl and the testimonies of patients and families in Fukushima and Northern Tochigi. 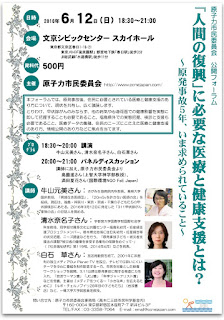 Shortly after I posted my interview with the first young person with thyroid cancer in Fukushima to speak out two weeks ago (STORY), I accompanied AP reporter Yuri Kageyama (TWITTER) to Fukushima where I introduced her to the young woman. Yuri's story, "Woman breaks silence among Fukushima thyroid cancer patients" was published by the AP yesterday (read HERE) and was included in their "The Big Story", "Top News", and "10 things to know for Today" sections.  If this doesn't shake things up, I don't know what will... 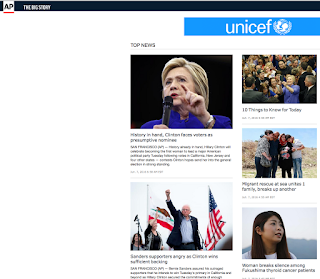 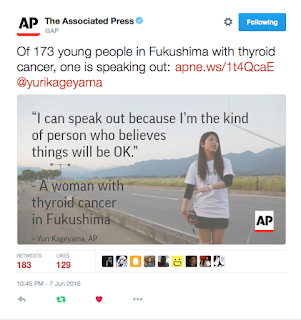 A few hours after the article was published, I received a message with an interview request from Mike Woods at Radio France Internationale English Service.  I was at a dinner meeting, so I excused myself to go outside.  While standing on a street in Tokyo on my iPhone, the interview was recorded in a sound booth in France- a great example of using technology for good.  The interview is HERE (3 min). 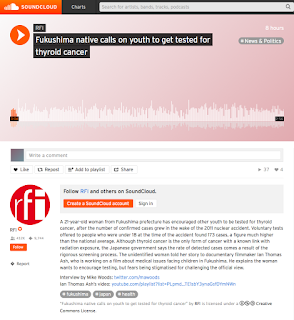 I am so grateful to the AP and reporter Yuri Kageyama for helping to share this brave young woman's story with the world.

Peace,
Ian
Posted by Ian Thomas Ash at 11:41 am No comments: