While in Fukushima this week, I have been visiting the parents, children and public figures who appear in my documentary, 'A2'.  I wanted to thank them for trusting me with their personal stories, and to share with them the news of our World Premier (HERE) and the feedback from the audience in Germany.

Mr. and Mrs. Shibuya had not yet seen 'A2', and so I brought the film with me when I visited their home.  When I met the Shibuya's last autumn, they shared with me the results of their children's thyroid examination results:  both their son, Ayumu, 12, and daughter, Mutsuki, 9, were found to have class A2 thyroid cysts (I wrote about meeting the Shibuya family last autumn HERE and HERE).


In my past experience with showing my films to the participants who are portrayed in them,  people understandably have tended to be really concerned about how they themselves appear in the film.  But with 'A2' it has been different: all the parents in the film are more interested in learning about the experiences of the other people in the film, people that are in similar situations as they are in but whom they have never met.  And perhaps more interestingly, the parents in 'A2' never seem to comment on how they themselves are depicted in the film.

When I met with Mr. Oouchi, a Fukushima City Councilman who appears in 'A2', I shared with him the news about the film and about what some of our future plans are (I wrote about interviewing Councilman Oouchi last autumn HERE).  I then asked the Councilman how he would like to use the rest of the time that had been allotted for our short meeting.  Would he like to see his own interview, I asked?

"I know what I said," the Councilman quickly replied, laughing.  "I want to know what the audience in Germany thought about the film."

I shared with Councilman Oouchi the video messages from the audience members in Frankfurt (video HERE).  All the way through, he kept nodding his head.

At the end of our meeting, Councilman Oouchi shared with me that he and his wife are expecting their third child. 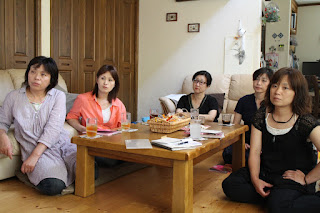 And the award goes to...

Each year, Nippon Connection gives out one award in each of three competition categories, and my documentary, 'A2' (WEBSITE), was nominated for the Nippon Visions Award (DETAILS).

I am so honoured (and shocked!) to be the recipient of the 2013 Nippon Vision Award for 'A2' (official notice HERE)!

When the jury read out their statement and said, "The award goes to 'A2' by director Ian Thomas Ash", I just couldn't believe it and kept shaking my head in disbelief.  I guess I was just so surprised (in a good way!) since this honour is usually given to a Japanese filmmaker.

I am so thankful for this recognition and know that this award will be instrumental in helping to get 'A2' out to a larger audience, both domestically within Japan and abroad.


Unfortunately, the recent news of more children in Fukushima being found to have thyroid cancer makes this topic ever more relevant (news story HERE).

Thank you all so much for your support, kind words, advice and encouragement.

With humble gratitude and peace,

Usually, I am behind the camera, but this week I have found myself being the one in the front of it.

Already I have been interviewed by one newspaper, two radio stations and for a documentary about Nippon Connection Film Festival itself.

I had the additional honour of being asked to speak on a panel about post-Fukushima films (INFO) that also featured Kiki Sugino, the lead actress and producer of the feature film Odayaka (WEBSITE) and Keiko Araki, director of the PIA Film Festival (WEBSITE) and one of the judges for the Nippon Visions Award for which my film 'A2' has been nominated (INFO).

Playing to a packed house

The World Premier of 'A2' (WEBSITE) took place last night in a full cinema in Frankfurt.  I was nervous, really nervous (one of my friends said I was "crawling the walls" before the screening), but it couldn't have gone more smoothly.

The theatre was packed, the audience was responsive, and the film looked and sounded great (it was the first time for me to see 'A2' on a big screen!).

People had come from all over to see the film (people from other parts of Germany, someone from Geneva and even someone from Italy!).  Several of the physicians from the Frankfurt chapter of IPPNW (LINK to my blog about IPPNW) also attended the screening.

During the post-screening Q and A, some of the people who watched 'A2' asked if they could send a video message to the families who appear in the documentary.  Later, in the lobby, I filmed their heart-filled messages of shock, solidarity and of taking action.

It was a huge honour to share the story of the children of Fukushima with the audience in Frankfurt, and I am so grateful to Nippon Connection (WEBSITE) for giving us this opportunity.  I know this will be a very important step to sharing the 'A2' with a larger audience.

Posted by Ian Thomas Ash at 7:44 pm No comments:

Connecting with an audience

I am in Frankfurt, Germany for the World Premier of my documentary 'A2' at the Nippon Connection Film Festival.

Nippon Connection, which is in its 13th year, is the biggest festival of Japanese films held outside of Japan, and this is the second Japanese film festival in which one of my films has been screened, after 'In the Grey Zone' was screened in Camera Japan (Holland) last year.

This time 'A2' is in competition and has been nominated for the "Nippon Visions Award", and all of the other filmmakers, along with the judges, are Japanese.

This year Nippon Connection has moved to two new venues, and they are AMAZING!  One is a converted warehouse, and itself is a work of art (not withstanding the amazing films, events and installations taking place within).

The screenings at Nippon Connection are full and the audiences are really excited to be watching these Japanese films.  The program of films has been beautifully curated, and it is an honour to be screened here.