After premiering "Boys for Sale" (WEBSITE) nearly a year and a half ago in Germany (STORY), the film has had an amazing run on the film festival circuit.  While we thought screenings might be over this past the summer, we have had a last minute surge in interest in the film and have just confirmed screenings this month in Germany and Slovakia.  Next month "Boys for Sale" will be screening in the Philippines and Switzerland, and in December it will be in Taipei.  More information about the screening can be found on the film's website (HERE).

These screenings now bring the grand total to 40 festivals, and on behalf of our entire team, we are so grateful for all of the support we have received over these many years we have been in research, production and post! 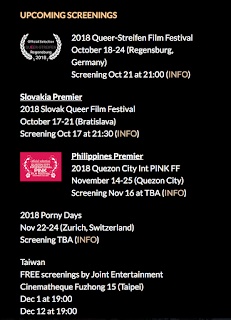 Back in July, I wrote about two new documentaries I am working on (STORY).  The first is called "Sending Off" (WEBSITE), which is the feature-version of my television documentary "Dying at Home" (INFO), and the other is a short documentary called "The Father's Love Begotten" (WEBSITE), which is about a young man who was sexually molested by a Catholic priest when he was a little boy.

While I am still putting the finishing touches on both of these films, I have already begun sending them out to film festivals.  Soon I will be announcing some exciting news regarding "The Father's Love Begotten" and an opportunity I have been given to hold a special private test audience screening of it at a film school near Detroit early next month for which both the film's subject and I will be in attendance. 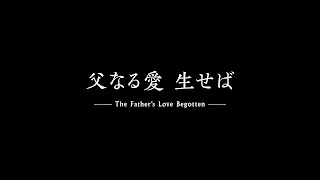 When I began working on "The Father's Love Begotten" nearly two years ago, I could not have imagined how timely its release would be and how the issue of sexual abuse in the Catholic church would be back in the news so prominently.

Although many people will have heard about the priest sexual abuse scandal, the film contains detailed descriptions of not only the rape, but of how this boy was groomed by the priest to believe that sex with the priest was his "duty" to God and how this continues to affect him in his sexual relationships as an adult. These are parts of this horrible tragedy that I believe most people have not heard before and are not being covered in the news.

My hope is that the story of the young man in "The Father's Love Begotten" will be heard by people across the world and that it will be one of the lights shed on the trauma these victims continue to suffer.  May their voices no longer be silenced by the Church.

Posted by Ian Thomas Ash at 9:04 pm No comments: