I leave for Canada and the RIDM festival tomorrow.

I googled our film, the ballad of vicki and jake, to see if anything was posted after our screening on Saturday in Copenhagen. Couldn't find anything in English regarding the CPH:DOX screening, but here's a few postings from Canadian sources.

The Canada.com website, in an article titled Really Real Lineup of Films, offers this quote about us:

First Camera shines a light on new directors, with fresh points of view. Ian Thomas Ash's "The Ballad of Vicki and Jake" looks at the documentary form itself.

While the RIDM festival press release Look Harder. See for Real. has this to say about us:

First Camera presented by Planète is all about discovery— emerging filmmakers, original viewpoints and narrative innovation. It’s an invitation into the unknown where tomorrow’s documentary greats are hard at work. Newcomer Ian Thomas Ash’s "The Ballad of Vicki and Jake" is a pointed investigation of the nature of documentary itself. It begins by capturing every detail in the life of a recovering heroin addict and her pre-teen son, and ends with the viewer wondering just who is manipulating whom.

In Highlights of the City’s Ninth Annual Doc Fest, the Montreal Mirror says:

Thorny questions about the relationship between the documentary filmmaker and their subject are raised by "The Ballad of Vicki and Jake". In this British entry by Ian Thomas Ash, the director sets out to capture the rehabilitation of a young junkie and single mom. The bond between filmmaker and junkie subject soon becomes tortured and their manipulations back and forth entangled.

An article from Hour called Getting Off on the One-off says:

Things get troubling in "The Ballad of Vicki and Jake", when the very green filmmaker, Ian Thomas Ash, spends a large chunk of the film convincing his subject - a cracked-out mom and her son trying to make good - to sign release forms that give him and his producer the rights to their story.

And perhaps the strangest piece linked to our film comes from our very own website's guestbook:

Will try to post while I am away. Wish us luck!
Posted by Ian Thomas Ash at 3:20 pm 5 comments:

three years ago this week

We met Vicki three years ago. The weather was cool and the leaves were changing. This photo was taken in Novemeber during one of the first interviews we had with her.

It is so hard to believe all that has happened in the time since this photo was taken. 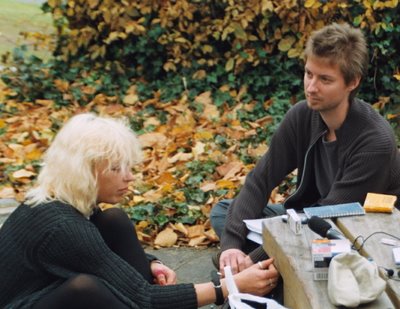 castle park, 5 november 2003
photo: ken kwek
I have been busy with preparations for the festival in Montreal. I leave on Tuesday and can't wait!
Posted by Ian Thomas Ash at 6:58 pm 6 comments:

first date without a chaperone 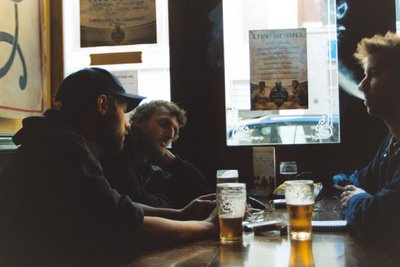 oneill's pub, 3 November 2003
photo: ken kwek
Our baby, the ballad of vicki and jake, is having its first showing without one of us holding its hand tonight when it has its Scandinavian Premier at the Copenhagen International Documentary Film Festival.

We're thinking of you, baby!
Posted by Ian Thomas Ash at 10:02 pm No comments:

Feeling a bit stressed lately? Yeah, me, too.

You know how good it feels to pop bubble wrap between your fingers? Well, thanks to my friend Bullfighter6.2 who pointed me in the direction of THIS website, now that feeling of release is only a click away.

Almost as good as the real stuff. Pop away, stressballs.

The voice that you hear when you push "fresh sheet" sounds just like Anthea, our assistant editor, when she hasn't had enough coffee. Scary.
Posted by Ian Thomas Ash at 2:05 pm No comments:

what they're saying about us 2

The English version of the CPH:DOX site is now up, so now I can finally tell you what they're saying about us in Copenhagen.

'The Ballad of Vicki and Jake' is a film about the omissions, manipulations and compromises involved in making the film...improvised interviews and choleric conflict resolution dominate the film. A meta film about the negotiation of power relations and the human decency demanded in every form of documentary.

If you have a degree in Film Studies, maybe you could explain the above to the rest of us. (Perhaps you, Matt?). In the meantime, I'm just glad they're talking about us.

For the full synopsis from CPH:DOX, go here.
Posted by Ian Thomas Ash at 8:48 am 2 comments:

I would like to thank all of my friends at the First Baptist Church back in upstate New York* for their lovely send off. Only a week to go until the ballad of vicki and jake premiers in North America and Scandinavia! 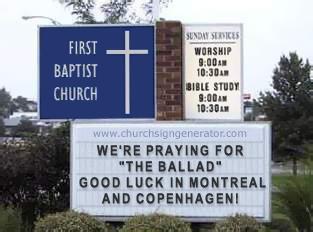 *Actually, I would like to thank my new friend, Bullfighter6.2, the vibrating blogger, for making me laugh with his tomfoolery and shenanigans.
Posted by Ian Thomas Ash at 2:46 pm 2 comments: 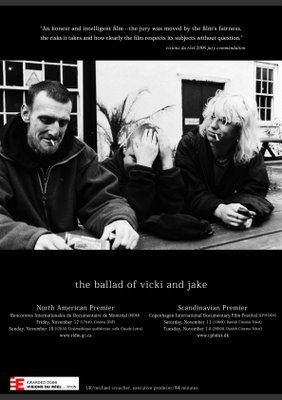 This is what the new posters look like that we ordered for the festivals in Copenhagen and Montreal for our film, the ballad of vicki and jake.
Posted by Ian Thomas Ash at 10:10 pm 2 comments:

My friend, Rob, who I met back when I was living in Bristol, has since moved to Japan and is making music up in the mountains of Toyama prefecture. OK, his journey has been a bit more complex than that, but let's talk FREE MUSIC!

He has just made his newest 10 tracks (a pop/techno album of music called 'Jigs for Jobots') available for free on his website. His music uses a lot of natural sounds that have been mixed together into a hip soundtrack that would be at home in any music lover's collection.
Posted by Ian Thomas Ash at 8:11 am No comments:

In case you missed my blog entries about my new vlog, you can find parts 1 and 2 here on the RIDM website. Part three will be cross-posted soon.