Life and death in the DMZ

アジア・グランプリ受賞しました。本当に感謝。 I am extremely honoured to have received the award for best film in the Asian Competition section for my film '-1287' (WEBSITE) last night at the closing ceremony of DMZ Docs Film Festival in Korea (WEBSITE).

In their statement, the Asian Competition Jury wrote they were awarding -1287:

... for its freshness in approaching the perennial theme of life and death in the Asian context...

Through deeply intimate conversations between the filmmaker and his subject, this film not only shows their mutual respect and understanding despite their different gender and cultural backgrounds, but also the courage of the female character to be honest with her life in a society which has limited space for women to express freely their emotions and thoughts.

Thank you all so very much for your continuing support! 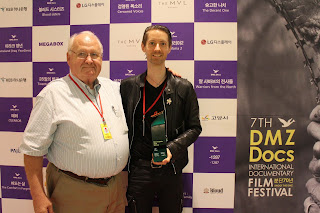 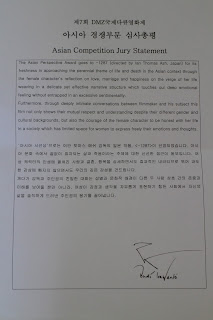 It has been an amazing week at DMZ Docs in Korea (WEBSITE), filled with amazing experiences and fabulous films.

Arriving last Friday, I was reunited with old friends, such as Wood Lin, the director of the Taiwan International Documentary Festival (TIDF), and provided with the opportunity to make new ones, such as "The Decent One" filmmakers Vanessa Lapa and Tomer Eliav.


On Sunday, guests were invited to take a tour to the DMZ, from where North Korea could be seen.  After meeting and speaking with people directly affected by this conflict, together with watching several documentaries about North Korea followed by discussions with the directors of the films, I am embarrassed to admit that all I had known about North Korea had come from Western media.  I am so grateful to have had an opportunity to visit this part of the world. 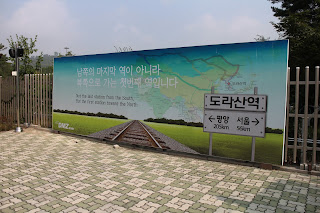 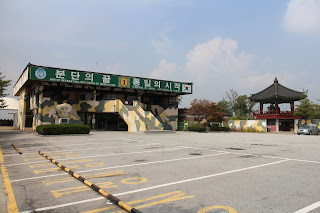 On Tuesday, my film '-1287' was screened (INFO), and I was honoured to be able to participate in the post-screening Q&A. 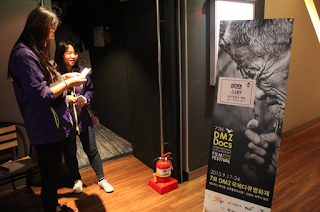 It is so hard to believe that the festival ends this evening!  I have written fewer entries from this festival than I have from so many others because most days have seen me in the cinema all day, followed by drinks each evening with fellow filmmakers.

A few of my film recommendations from DMS Docs:

The Descent One, directed by Vanessa Lapa (INFO):

Through previously undiscovered private letters, photos and diaries that were found in the HIMMLER family house in 1945, the The Decent One exposes a unique and at times uncomfortable access to the life and mind of the merciless "Architect of the Final Solution" Heinrich HIMMLER. A unique portrait of one the most prominent figures of the Third Reich: The Reichsfuhrer-SS: Heinrich HIMMLER.

A family's search for their missing son and the hunt for suspects in a terror attack tragically converge in Help Us Find Sunil Tripathi, a film about truth and community in the age of social media. While in the throes of depression, Brown University student Sunil TRIPATHIi walked out of his Providence apartment and disappeared into the cold Rhode Island night. In a desperate search to find him, his family launched a social media movement that reached across the country and brought together a community dedicated to finding him. In the days following the Boston Marathon bombings the family's month-long investigation into Sunil's disappearance exploded into a virtual confrontation with e-vigilantes, citizen journalists and traditional media eager to feed their insatiable hunger for breaking news.

This documentary explores the creation of the Vietnam Veterans Memorial in Washington, D.C. Although it became one of the most beloved memorials in the world, Maya Lin's elegant design was initially greeted with skepticism. Lin was an unknown architect whose entry had been selected after a nationwide competition. She was only 20 years old, and it angered some politicians that she was Asian. Yet through all the vitriol, Lin persevered, ultimately realizing her stirring artistic vision.

On the Rim of the Sky, directed by Hongjie Xu (INFO):

In the hidden cliffs of Sichuan province lies the Gulu Village. Shen is the only teacher of the village who runs the “Gulu Primary School". One day a young man who calls himself the "Don QUIXOTE", Bao TANGTAO came and with him the words about the village spread, and donation and visitors have upsurged. And the conflict between Shen and Bao arises about the donated money.

Hana, dul, sed gives us a subtle glimpse of the workings of Pyongyang society and the way ideology functions in its citizen’s and personal lives. It is a film about four young women, their friendship, dreams, hopes and the passion for football they share.

Memory of forgotten War conveys the human costs of military conflict through deeply personal accounts of the Korean War(1950-53) by four Korean-American survivors. The film's personal accounts are interwoven with thoughtful analysis and interpretation of events in a broader historical context.

Aim High in Creation! is a ground breaking propaganda film, made according to the rules of his 1987 Manifesto The Cinema and Directing. Determined to stop a new gas mine near her Sydney home, Anna BROINOWSKI goes to North Korea to learn from the masters of propaganda cinema.  The movie reveals an unexpected truth about the most isolated nation on earth.

Posted by Ian Thomas Ash at 3:00 pm No comments:

On Friday evening, my film 'A2-B-C' (WEBSITE) was screened in NYC by the Centre for Remembering and Sharing (INFO).  I had the honour of joining the post-screening discussion via Skype, from the comfort of home holding a nice, hot cup of coffee on a Saturday morning. 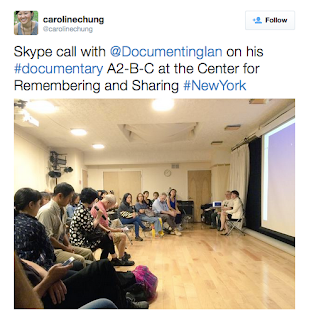 Also on Saturday, an article about the cancellation of 'A2-B-C' screenings in Japan was published by in the Voice of America China edition (ARTICLE).  The article was written by Louisa Sakai, who attended last weekend's screening of 'A2-B-C' (INFO), the first in Japan in 6 months. 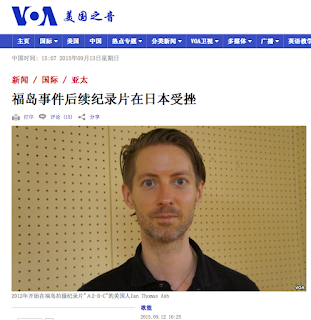 Tomorrow evening (September 14), my film '-1287' (WEBSITE) will be screening at LA's Live Regal Cinema during the Awareness Film Festival (INFO). 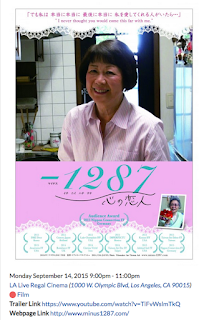 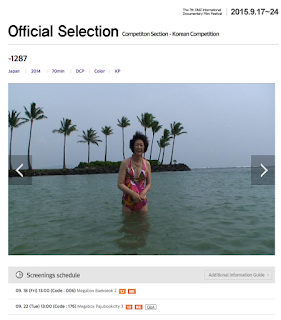 From Korea, I will be conducting the post-screening Q&A for the September 26 screening of '-1287' in Holland's Camera Japan Festival (INFO).  This will be the third time to screen one of my films in this wonderful festival of Japanese film, although I have not yet been able to attend.  I look forward to attending a future edition of the festival! 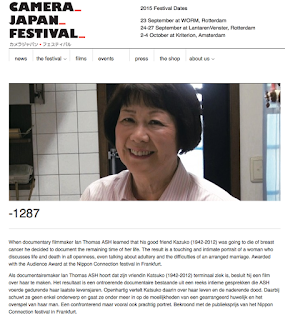 From there, I will continue on to Taiwan, where '-1287' will screen in the Taiwan International Ethnographic Film Festival (TIEFF) on October 3 (INFO).  Two years ago, my film 'A2-B-C screened in this festival, and I am looking forward to the opportunity to the attend this festival for the first time. 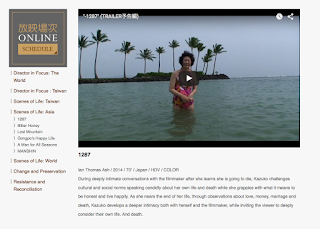 Coming up this autumn there are several more screenings of my films around the world, and I look forward to sharing the news as soon as the official announcements are made.  Thank you all so very much for your continued support!
Posted by Ian Thomas Ash at 7:58 pm No comments: 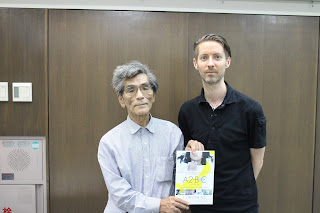 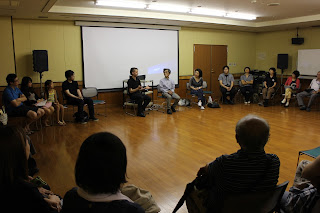 The screenings were well-attended and the Q&A's that followed were lively.  The atmosphere in the room and the way in which the attendees were engaging in the discussion reinforced for me that the importance of events such as these lie not only in the watching of films (which could technically be done in the privacy of one's own home) but it is in the coming together of people to make connections, discuss and debate.
Posted by Ian Thomas Ash at 11:00 pm No comments: