JANUARY
We put the finishing touches on my documentary "Dying at Home", a film commissioned by NHK World for their series "Inside Lens".  I was also honoured to appear on the main NHK domestic channel to promote my episode and represent the series (STORY).  Meanwhile, I was already editing a new film, "Sezaruowoenai" (working title), which was scheduled to screen in Berlin in March, as screenings for my film "-1287" continued around the world (STORY). 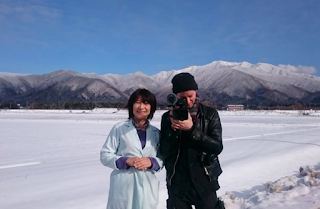 I was honoured to serve as the MC for the press conference "The Risk of Low Dose Radiation" given by Angelika Claussen, Medical Doctor & European vice-president of International Physicians for the Prevention of Nuclear War (IPPNW) at the Foreign Correspondents' Club of Japan (HERE), and my film "-1287" was awarded Best Documentary at the SoCal Film Festival (HERE). 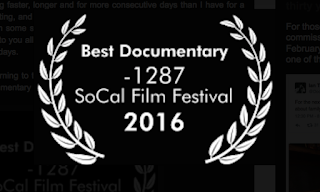 "Sezaruwoenai" (working title) (INFO) which will be the 3rd documentary in my series about the Fukushima nuclear disaster, had work-in-progress screenings in Germany and Ireland (STORY).  The 5th anniversary of the nuclear disaster was marked, and I re-published THIS collection of short documentaries, continued screenings of my Fukushima-themed films "In the Grey Zone" and "A2-B-C" (STORY), and was invited to speak at conferences about my work (HERE). 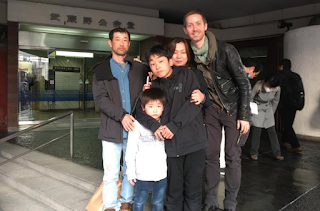 I published "Mr. Hata and T, a dying father reunites with his son after thirty years", a story I was extremely honoured to share and one that has continued to influence my work throughout 2016 (STORY). 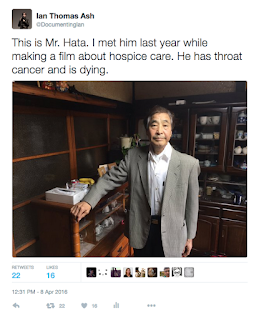 Mr. Hata died three weeks to the day of the reunion with his son (STORY).   I  served as the MC for the Q&A following a screening of Fukushima: A Nuclear Story held at the Foreign Correspondents' Club of Japan (STORY), published a testimonial of the first young thyroid cancer patient from Fukushima to speak out (VIDEO), while screenings of my films "-1287" and "Dying at Home" continued around the world (STORY). 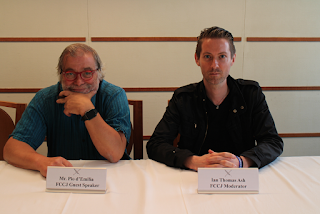 I accompanied AP reporter Yuri Kageyama to Fukushima where I introduced her to the young woman with thyroid cancer. Yuri's story, "Woman breaks silence among Fukushima thyroid cancer patients" was published by the AP and was included in their "The Big Story", "Top News", and "10 things to know for Today" sections and featured my video (STORY).  Screenings of my film "A2-B-C" continued (STORY),  and I attended the burial of Mr. Hata (STORY). 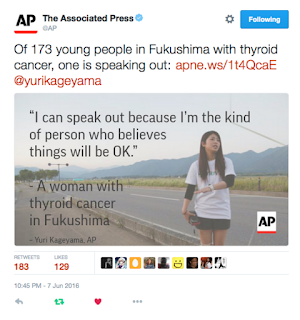 JULY
I went pretty quiet as I moved into the role of Executive Producer on a documentary directed by an up-and-coming new director.  Filming and editing on that project continued in the background as I worked on my own films for the rest of the year.  It is set for completion in January 2017, and I look forward to sharing more about that film and upcoming screenings in the months to come. 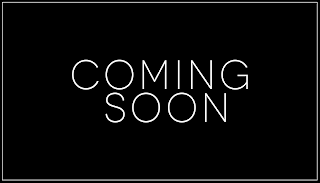 AUGUST
I returned to Fukushima to mark the Festival of the Dead at Mr. Hata's grave (STORY).  I was honoured to be invited to Taipei to serve as a lecturer beside filmmakers Feng Yan, from China, and Cathie Dambel, from France at the Doc + Documentary Workshop sponsored by the Taiwan Film Institute (STORY), where my first feature documentary "the ballad of vicki and jake" (2006) was screened (STORY) and I took part in a panel discussion about editing (STORY). 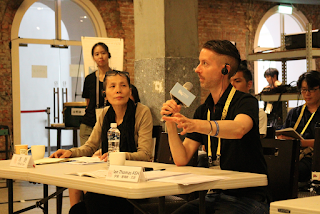 SEPTEMBER
In addition to being in pre-production for a new commission by NHK World, I appeared in some promotional videos created by a friend's PR company (STORY).  It had been over 10 years since I had worked professionally as a model/ actor in Japan, and I was reminded of all the reasons I prefer to be BEHIND the camera.  ;) 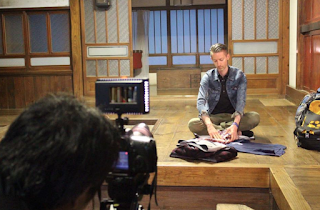 Friend and fellow filmmaker Thomas Schlottman flew over from Germany to Japan (twice!) for what turned out to be a nearly 5-week shoot on the new commission for NHK World.  Thomas had also shot some of my last commission "Dying at Home" and it was great to work with him again, including a very fun shoot with a helicopter (STORY)!  Our new film is scheduled for broadcast in February 2017. 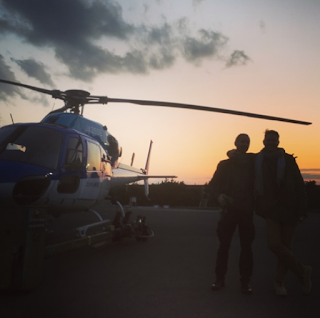 My lecturing about filmmaking at the University of Tokyo continued this year as did my instructing of filmmaking at the Japan Visual-media Translation Academy.  Also, the first in my series of documentary-style PR videos for the Imperial Hotel was published (STORY). 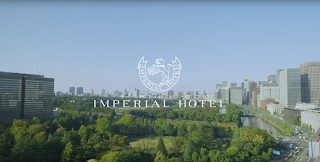 My article "The making of a Twitter documentary: The last wish of Mr. Hata" was published on the front page of the No 1 Shinbun, the magazine of the The Foreign Correspondent's Club of Japan (HERE).  And I ended this year with a visit to Mr. Hata's grave (HERE). 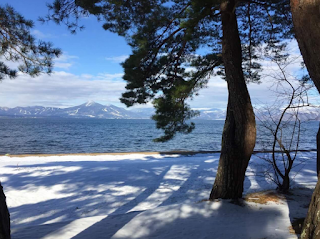 2016 has been such an amazing, fulfilling and humbling year.  Thank you all so much for your support and encouragement.

May your 2017 be filled with much Peace, health and Happiness,
Ian
Tokyo, Japan
Posted by Ian Thomas Ash at 3:31 pm No comments:

Giving Thanks and Saying goodbye

The time I spent with Mr Hata this year really changed me, and I wanted to visit his grave to give him my thanks and leave an offering.

Yesterday I visited Mr Hata's home. His favorite cherry tree by lake Inawashiro was covered in snow as Mt Bandai looked on. 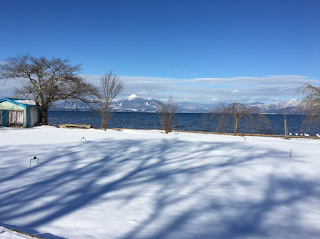 After leaving offering of wheat liquor on alter in Mr Hata's home, I retraced our steps from late spring when we buried him in the forest. 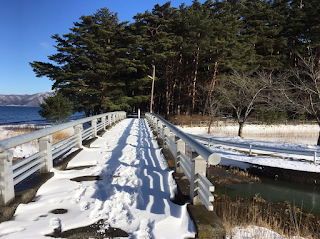 Wearing Mr Hata's long rubber boots I found in his shed, I headed into the forest that holds his grave. 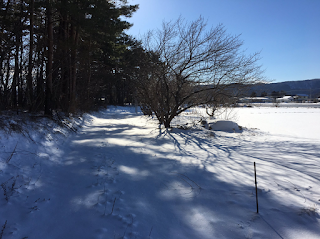 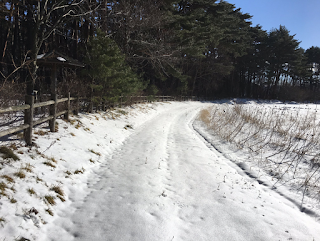 Mr Hata's forest grave is a place of peace. May we all find such peace both in life and in death. 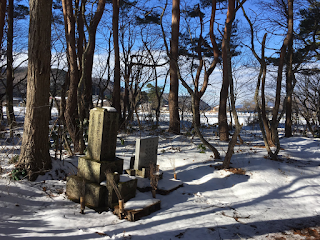 I am so grateful to have met Mr Hata. My gratitude to you for sharing in his story. Much peace, health & happiness to you all in 2017, Ian 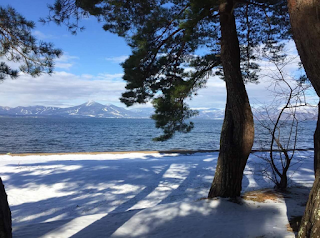 Original story about Mt Hata I published on Storify: https://storify.com/DocumentingIan/mr-hata-and-t-a-reunion-after-30

My article about Mr Hata published this month by the Foreign Correspondents' Club of Japan (FCCJ) magazine: http://www.fccj.or.jp/number-1-shimbun/item/881-the-making-of-a-twitter-documentary-the-last-wish-of-mr-hata.html 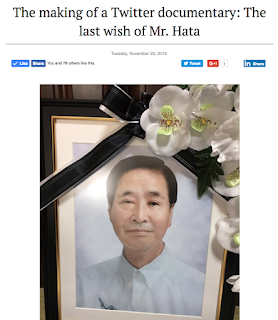