So nice to come home to

After another whirlwind trip of traveling with 'A2-B-C' (WEBSITE), I am back home in Japan in time to enjoy the last few days of the cherry blossom season.

Having just arrived in the US a few days earlier, on the morning of March 26th my alarm went of at 4AM and by 6, I was taking part in a post-screening Q&A with an audience in Tokyo via Skype from my father's home.  The screening, arranged by Tokyo University of the Arts Professor Mouri Yoshitaka, took place as part of a symposium held at Waseda University (INFO in Japanese/日本語) and was joined by panelists Professors Ito Maomoru and Iwabuchi Koichi.

I seldom think about what it is that I do, and fielding questions and receiving feedback from these critical powerhouses was a challenge and an honour for which I am extremely grateful. 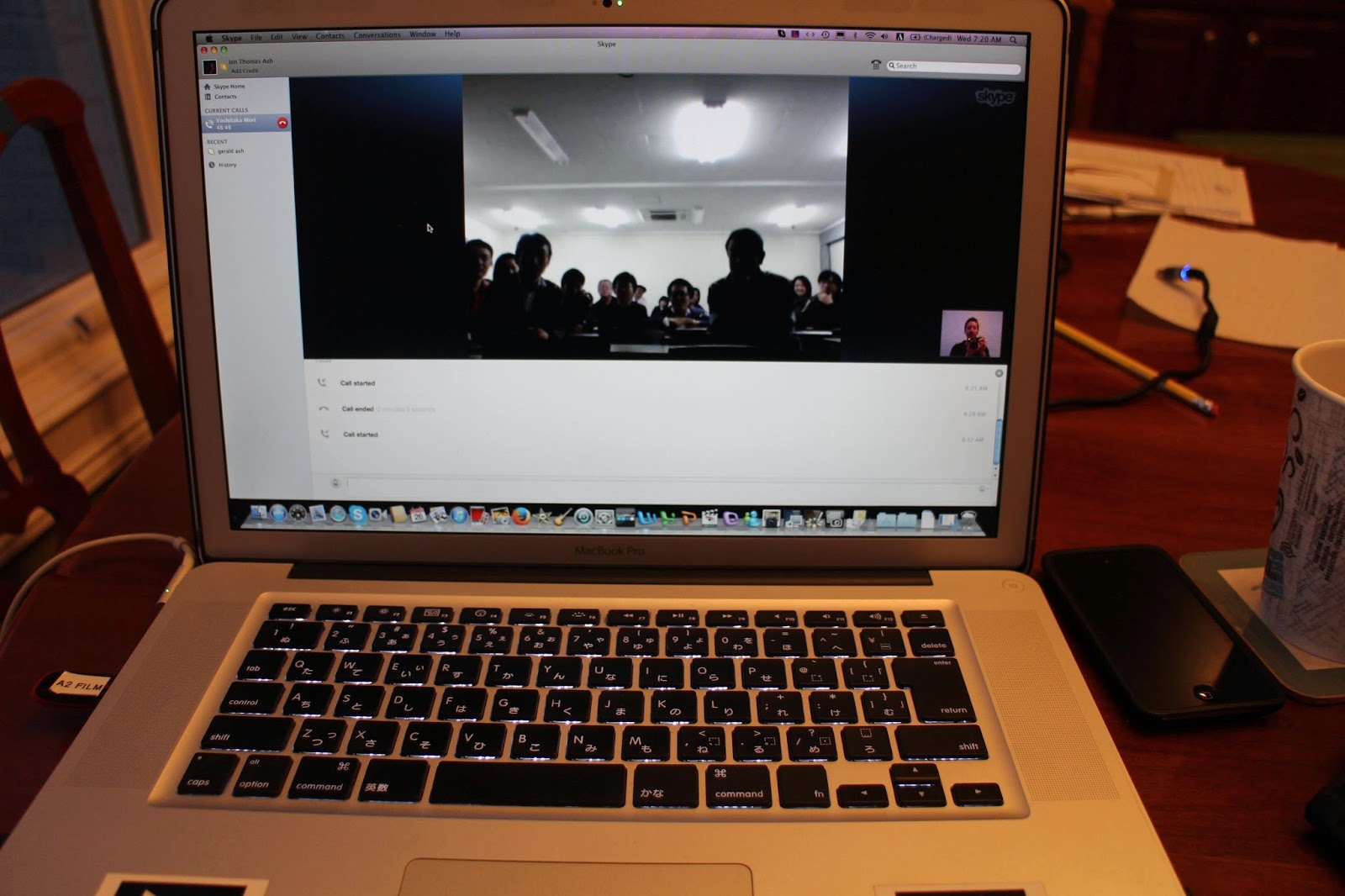 That evening, 'A2-B-C' was screened as part of the United Nations Association Film Festival's strand in the Environmental Film Festival in the Nation's Capital (INFO).  Although I was not able to be there in person, producer Amanda Freeland (AKA: my sister!), who lives just outside D.C., was in attendance to hand out materials and contact information and was accompanied by a contingent of our friends and family.


Back in Japan on the 29th, a group of high school seniors that had requested to show 'A2-B-C' at a graduation event screened the film outside Tokyo.  Their report (in Japanese) about the screening has been posted to the 'A2-B-C' Facebook page (HERE/日本語) and one of the photos they sent is below.

The name of the student's Fukushima-themed event: "I want to go home.  But I can not go home." 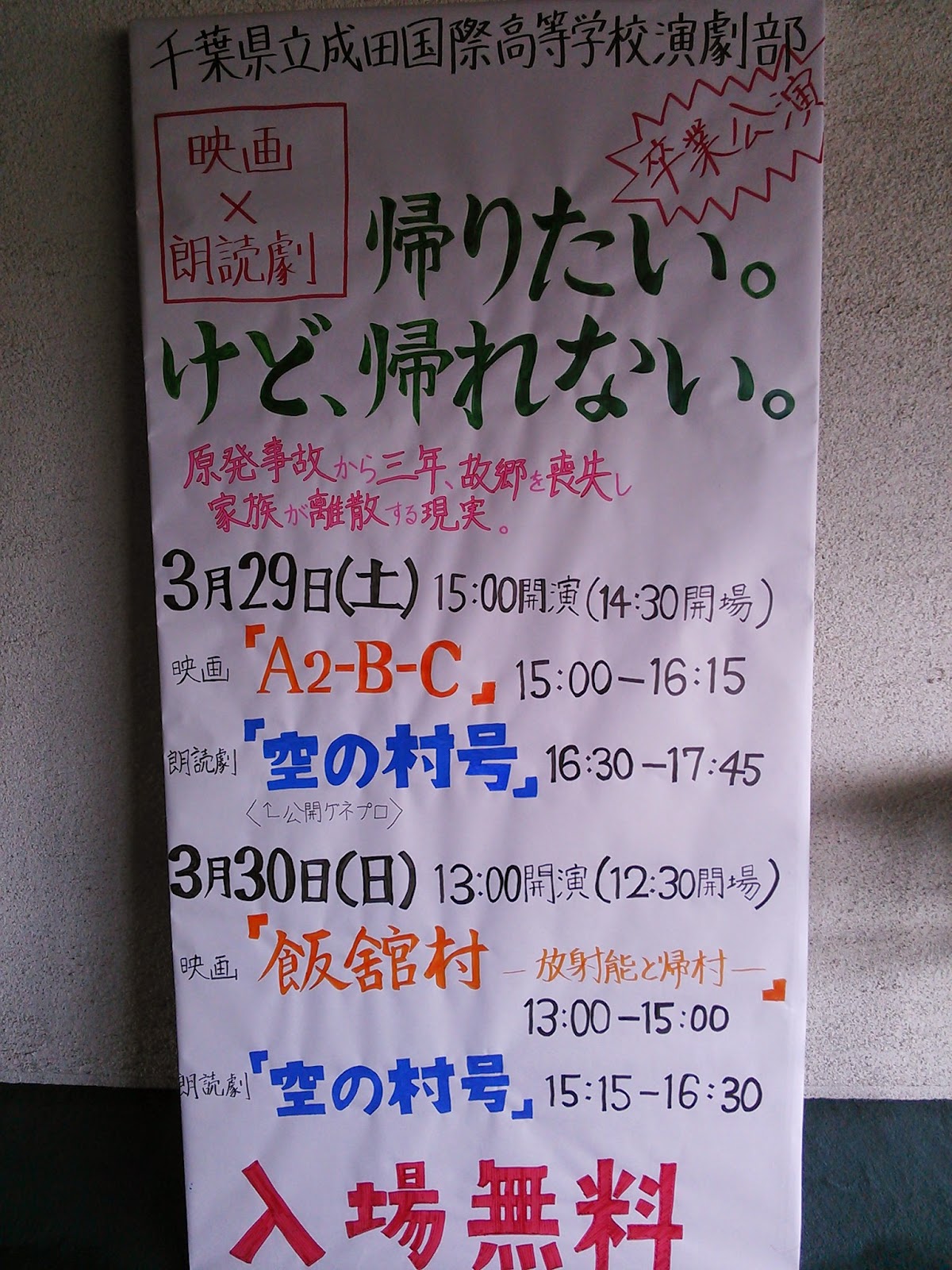 On March 30, I traveled to New York City where a screening of 'A2-B-C' was held.  Having been born in Upstate New York, this was a kind of homecoming for me, and I was thrilled to have both long time friends and family in attendance.  I was honoured to take part in the post-screening discussion, led by organizer Tonohira Yuko, which covered a vast number of topics and concerns.

ADDED April 7:  I am very humbled by THIS account (in English) of the screening in NYC by Hamada Hiroyuki. 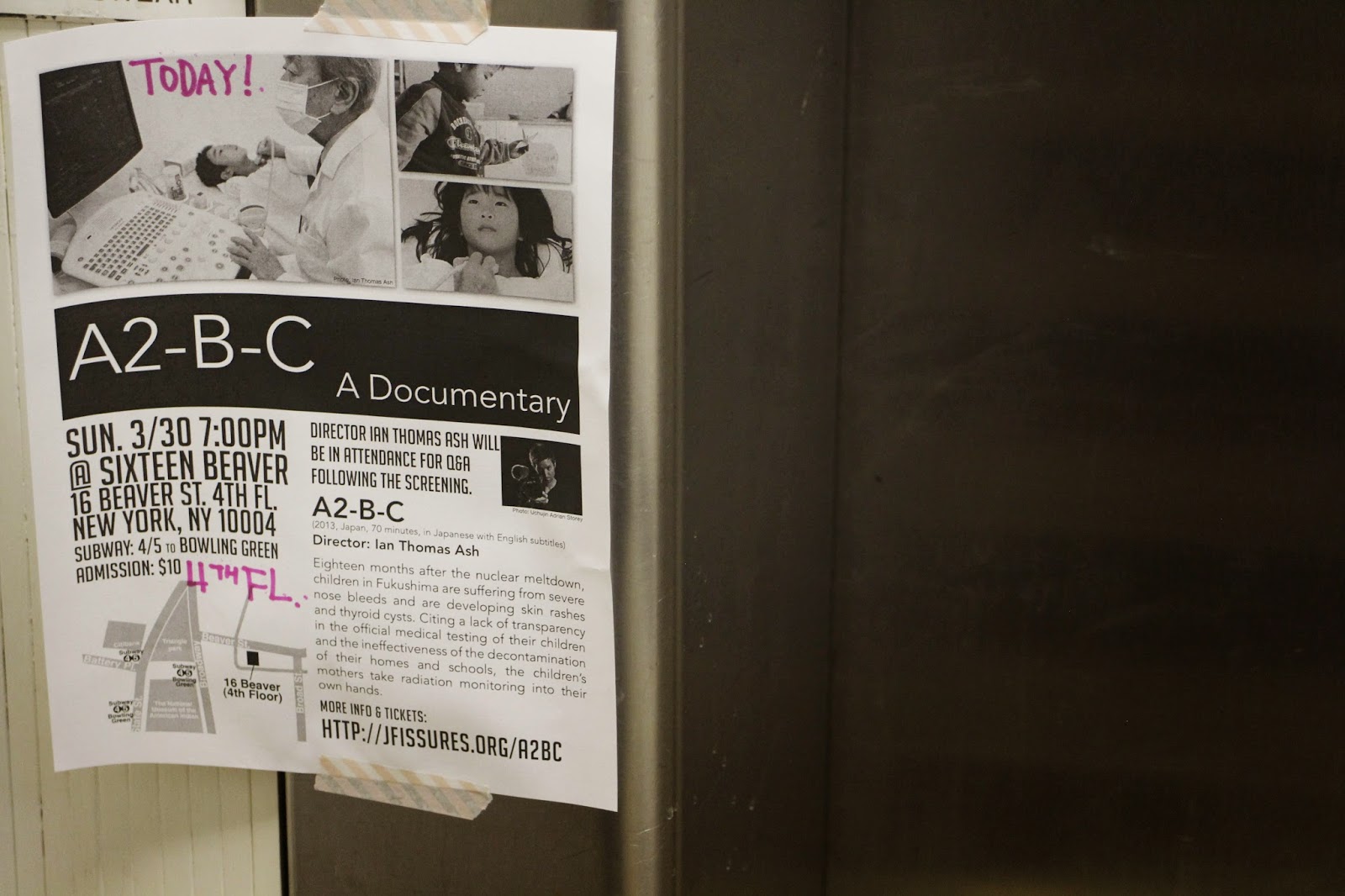 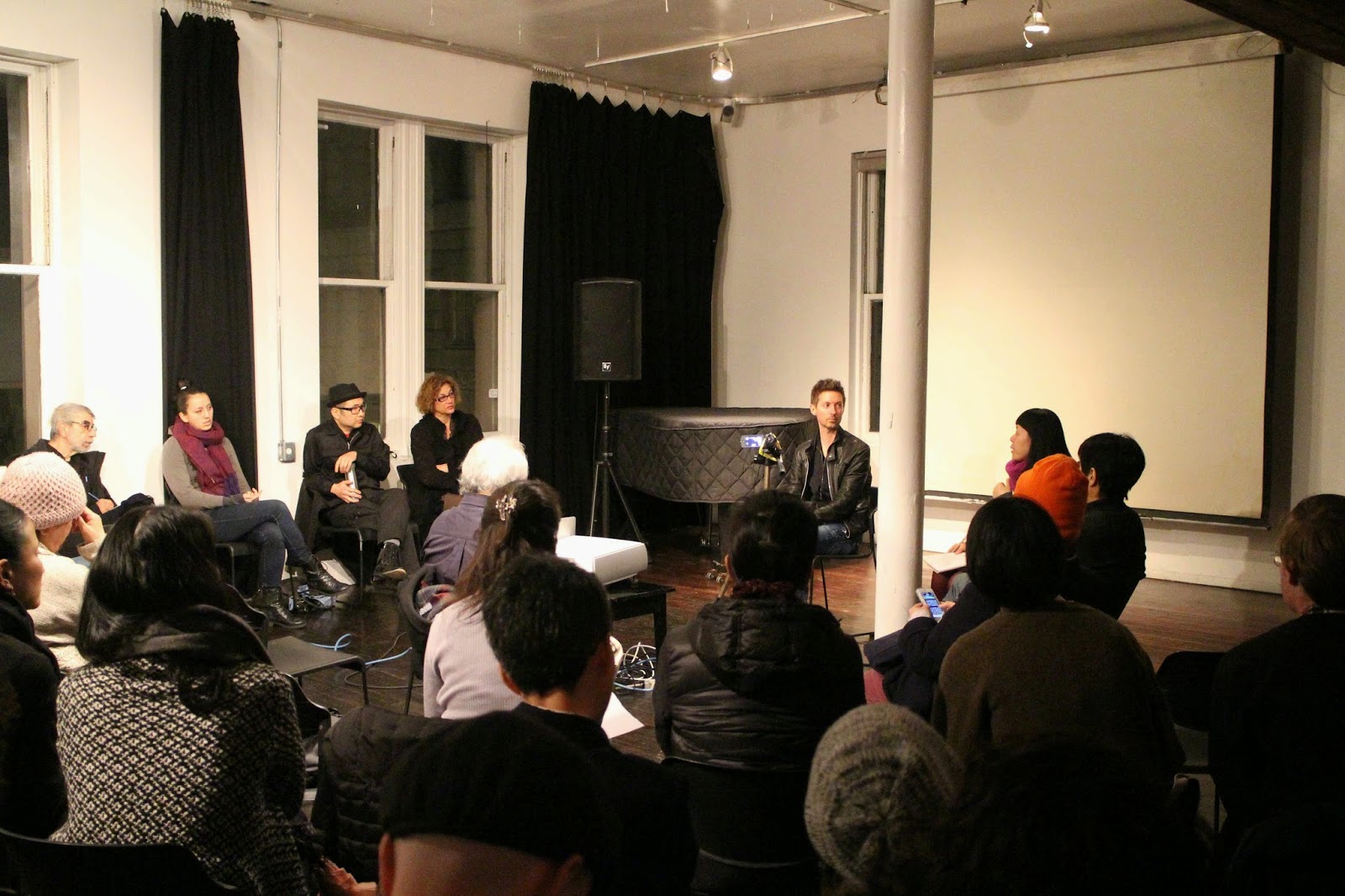 The next day, I was on the road again, this time to Bryn Mawr, Pennsylvnaia, where I was invited to screen 'A2-B-C' as part of the Bryn Mawr Film Institute film series "Japan at the Brink: Precarity of Youth in Films of Disaster and Dystopia" (INFO).  Dr. Tienfong Ho, adjunct professor of art history at Tyler School of Art, had learned of the film from Dr. Fujiki Hideaki, professor of film at Nagoya University in Japan, to whom I am so grateful for much support and encouragement since meeting last year (STORY).

The screening of 'A2-B-C' was the final film in this student-curated series, and I was extremely honoured to be the only director invited to attend the screening and culminating lecture "Audience and Action: Recent Citizen Activism and Cinema" given by Dr. Fujiki.

My cousin, who lives nearby in Delaware and whom I had not seen in years, surprised me by attending the screening.  After the screening, we shared stories of family adventures (and mis-adventures!) over adult beverages, and it was a welcome relief to shed my public persona for a few hours.
Getting in just a few hours of sleep after the closing dinner before a taxi picked me up at 3:30AM to take me to the airport (!), I was back in Japan before I knew it.  The cold, rainy Tokyo I had left just ten days earlier was now warmer and at the peak of the Cherry Blossom season.

So nice to come home to: 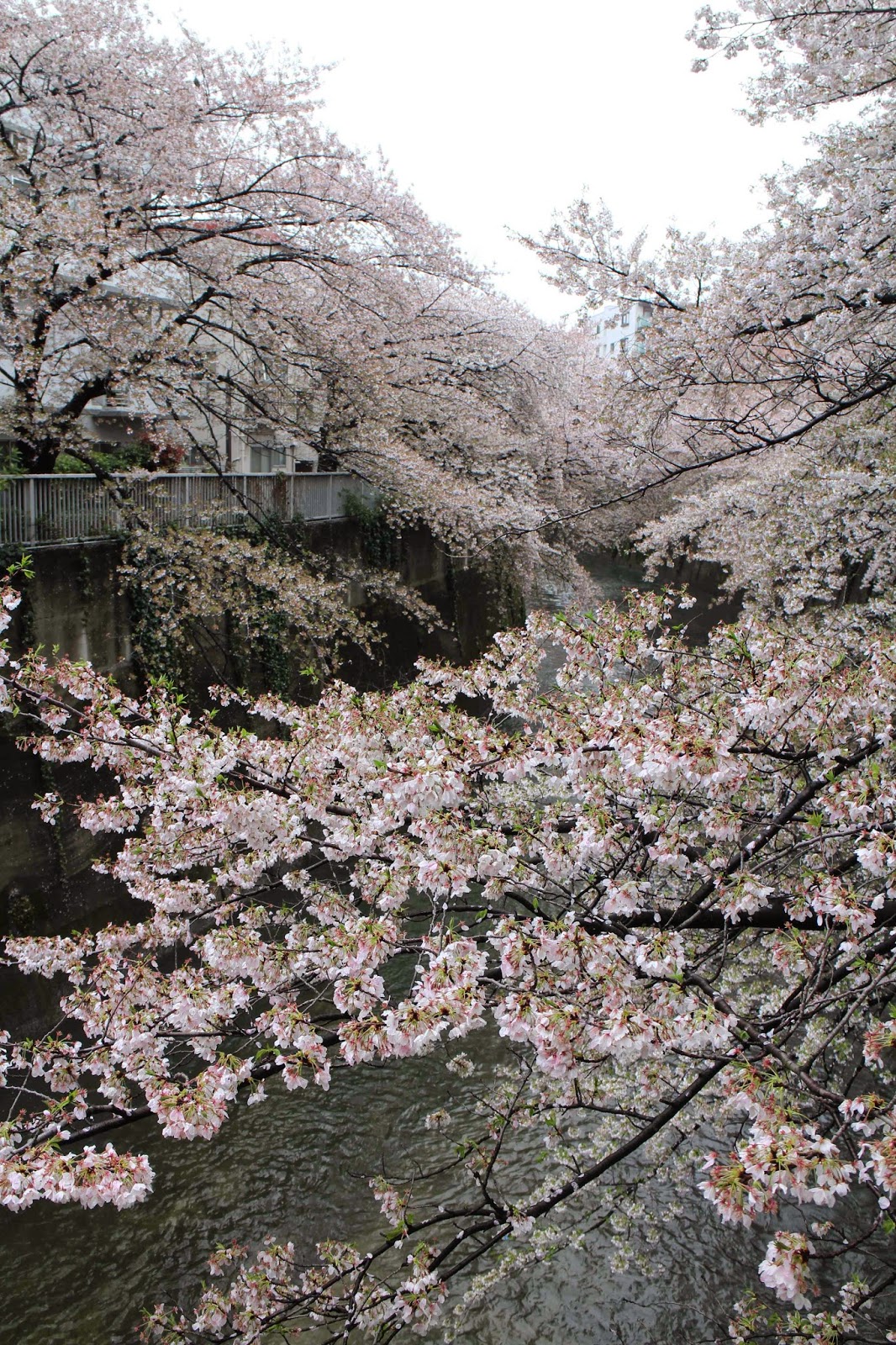