In thoughts, words and deeds

Another blog from the airport in Tokyo: this time I am on my way to the Middle East...

Since screening in the Lake Champlain International Film Festival (LCIFF) in New York State several weeks ago (STORY), life has been a blur of continuing domestic screenings of 'A2-B-C' (website ENGLISH/ 日本語), the start of my new job teaching at the University of Tokyo (STORY), and some other very significant changes in my personal life.

After the screening in LCIFF, I traveled to Quebec, where I had the honour of screening 'A2-B-C' at John Abott College (WEBSITE) as part of their Simon Kevan Lecture Series on November 17.  The screening was arranged by the Humanities Department's Roy Fu and was held during his course "Technology and Human Values", although the event was open to the entire college.

When Mr. Fu initially contacted me about his interest in screening the film, I was fascinated by the context in which the film would be screened for the students.  He wrote:

The course "basically covers various technological systems and the challenges they present humanity, and their interconnectedness. Examples include agri-food, energy, military, media. Since its occurrence, the course has tried to follow the events at Fukushima. An important question in the course: "how can we do things differently, in face of monopolizing technological systems? what kinds of system changes are needed? what kinds of feasible actions are being taken? how does the individual fit in the scheme of potential change?

"Of course to address the above questions, there needs to be a thorough understanding of how things are currently done, including how terribly destructive systems have a hold on us all. This is where your film comes in..."

Following the screening, there was more than an hour to answer the student's questions and discuss some of the events surrounding what is contained in the film.

The next day the film was screened at Montreal's McGill University, at an event organized by Kizuna Japon (INFO) with the help of many volunteers and sponsoring professors.  The screening was standing-room only and the post-screening discussion, at which I was surprised to find several friends and associates in attendance, was lively. 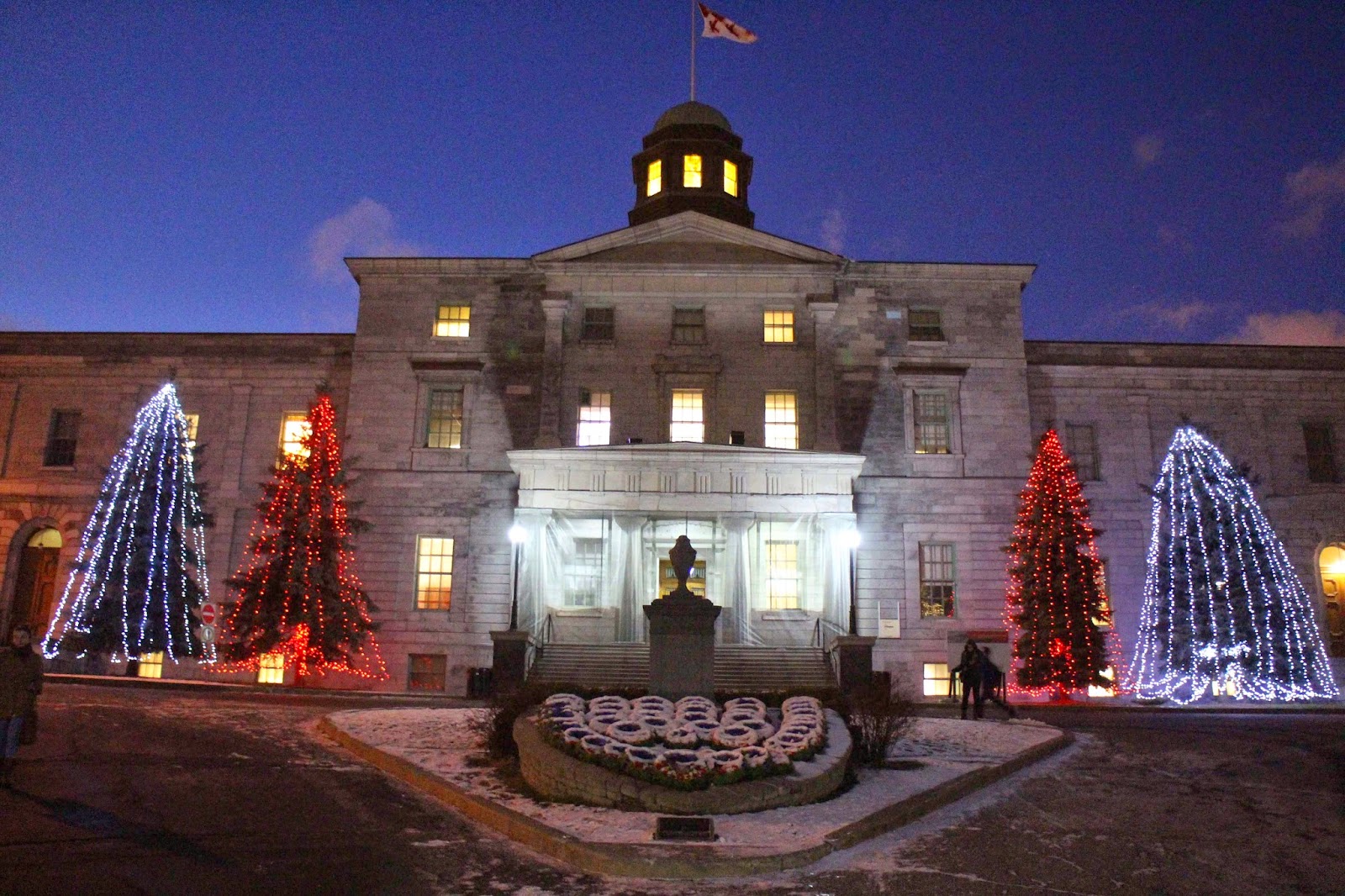 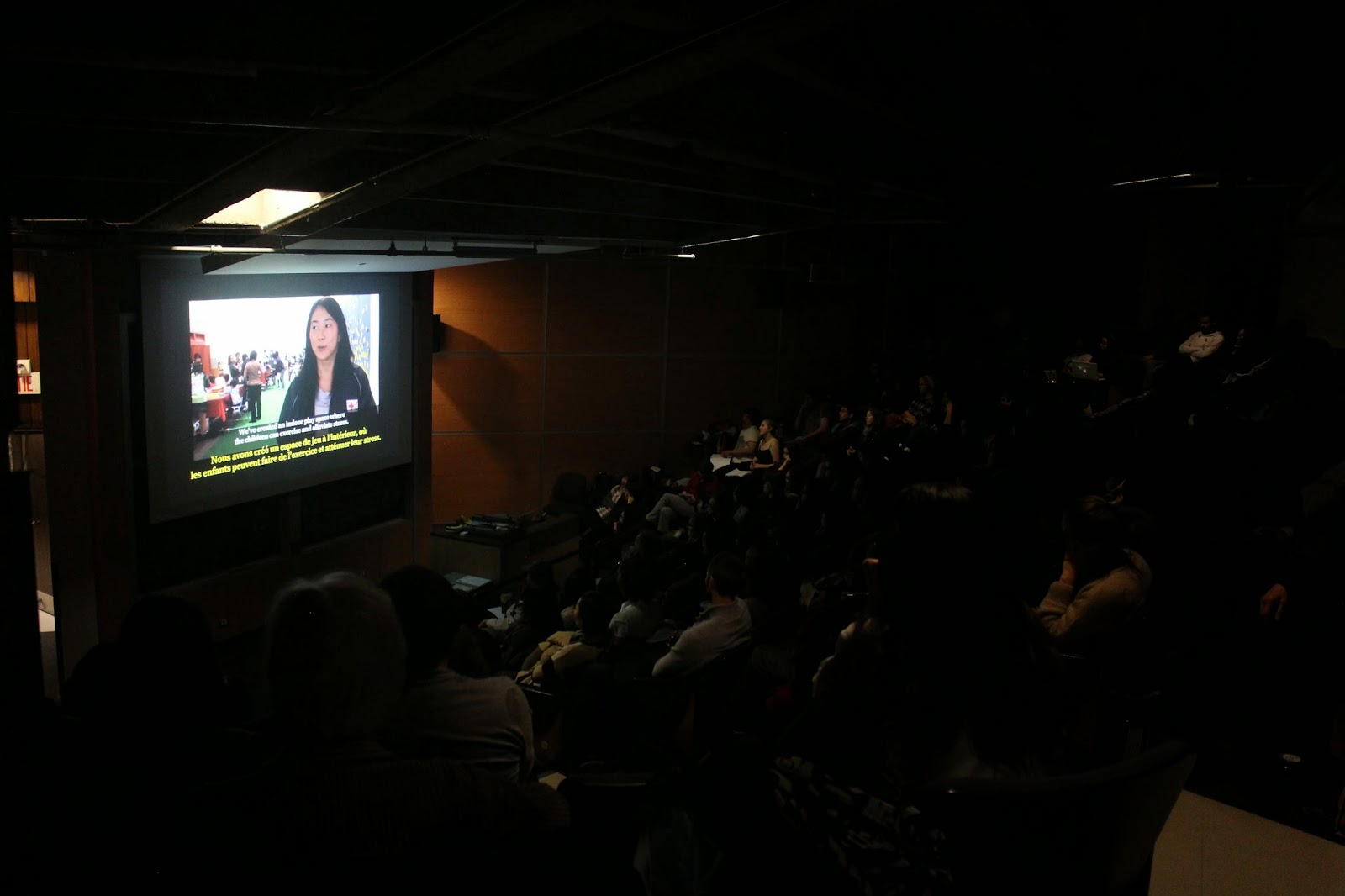 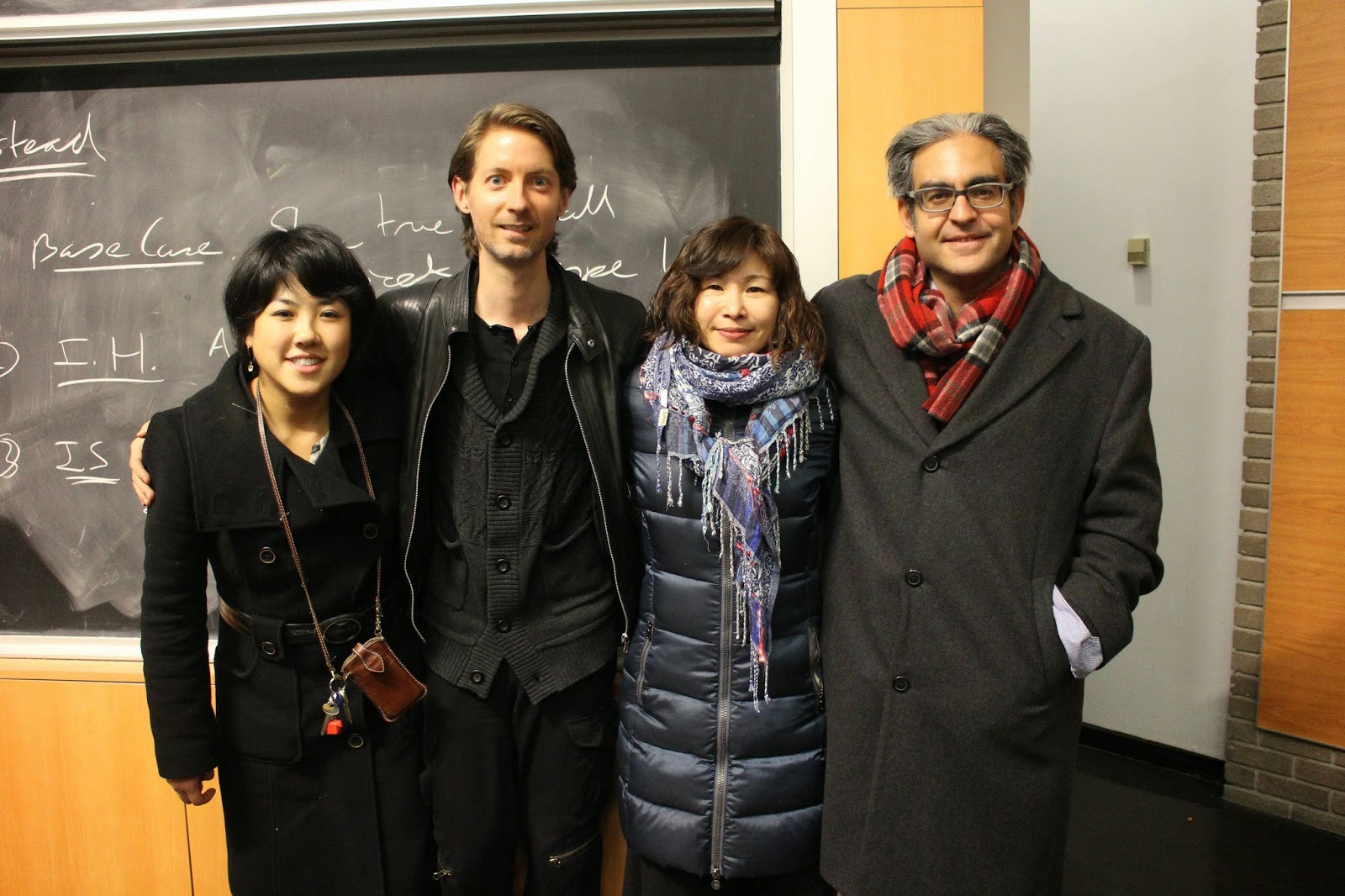 Returning home to Japan on the 20th, I hit the ground running, attending screenings in Akiruno on the 22nd and Seto on the 24th (Japan domestic screening info HERE).  While the film was screening in Seto, I folded origami with some of the children of the event volunteers in the lobby, and when I entered the hall for the post-screening discussion, I found it was with a feeling of renewed hope. 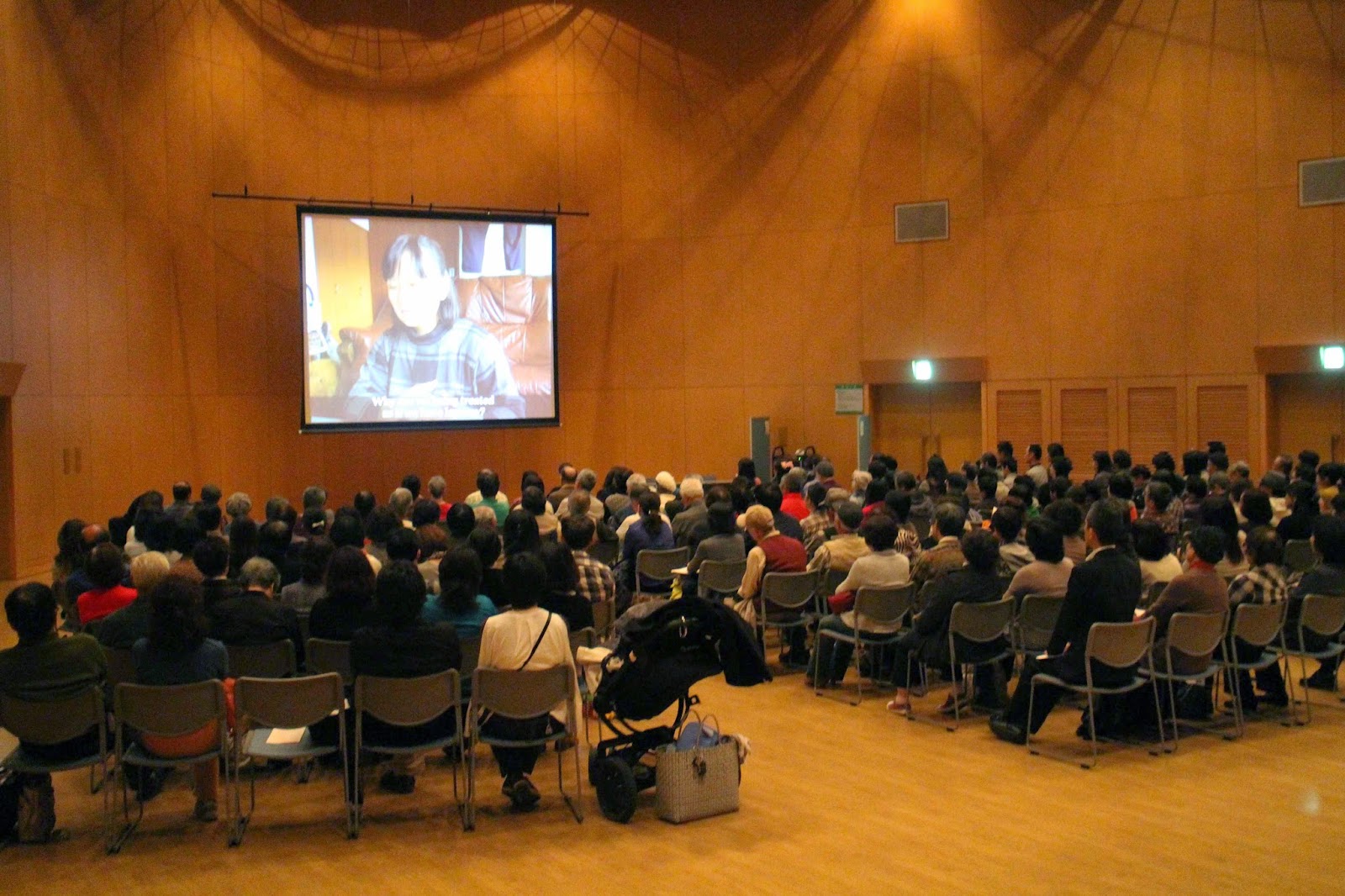 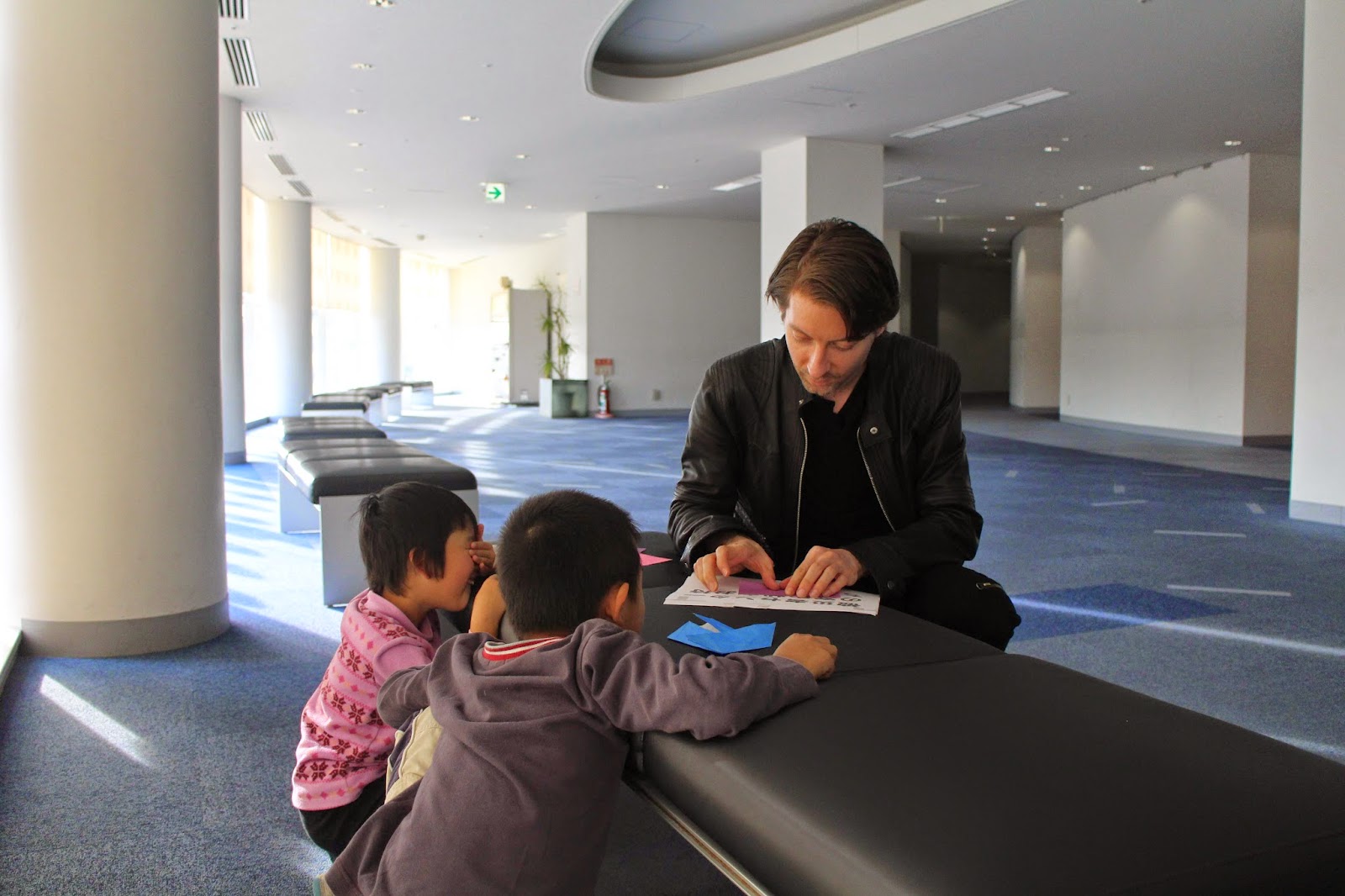 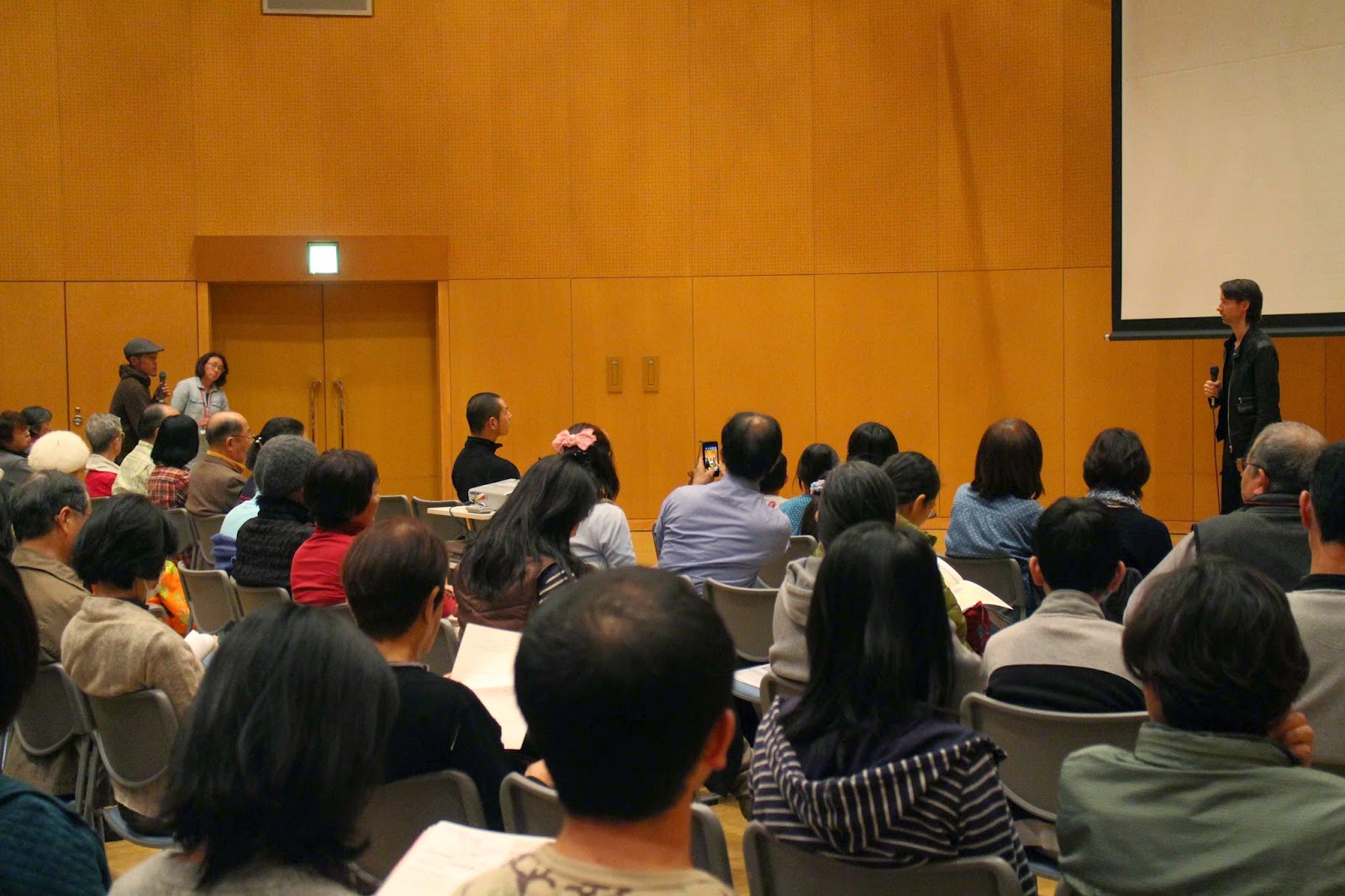 While I have been officially working for the University of Tokyo since October 1 (with meetings going back into the early summer), preparations went into high gear prior to our first class on November 29th, which was held among the golden splendor of the autumn ginko leaves (photo below).  The class is called "Visualizing Tokyo", and I am one of the instructors along with Professor Nicola Liscutin.  "Visualizing Tokyo", is a "flip-course", for the online MOOC course "Visualizing Post-war Tokyo" taught by Professor Yoshimi (Part 1 info HERE and Part 2 info HERE) and is ongoing until February of next year.

As a "flip-course", our students complete part of the course online (by watching Professor Yoshimi's lectures) and then we teach them in very intensive classes (6 hours a day for several days that are spread throughout the semester).  In our class, we are applying the theory from the online course to present day Tokyo.  As a filmmaker, my job is to teach the students how to make their own film (or photograph or other visualization), and I am really excited to see their final projects at our "film festival" in February! 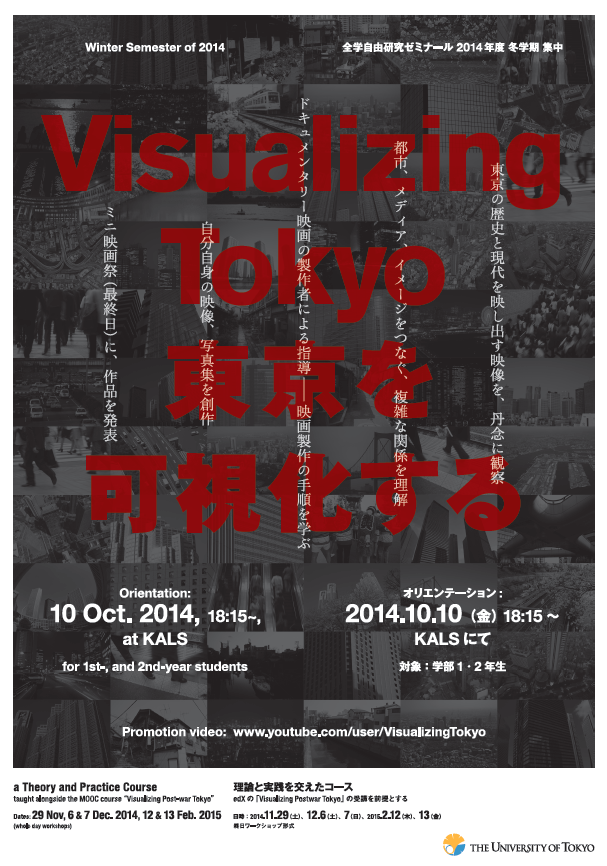 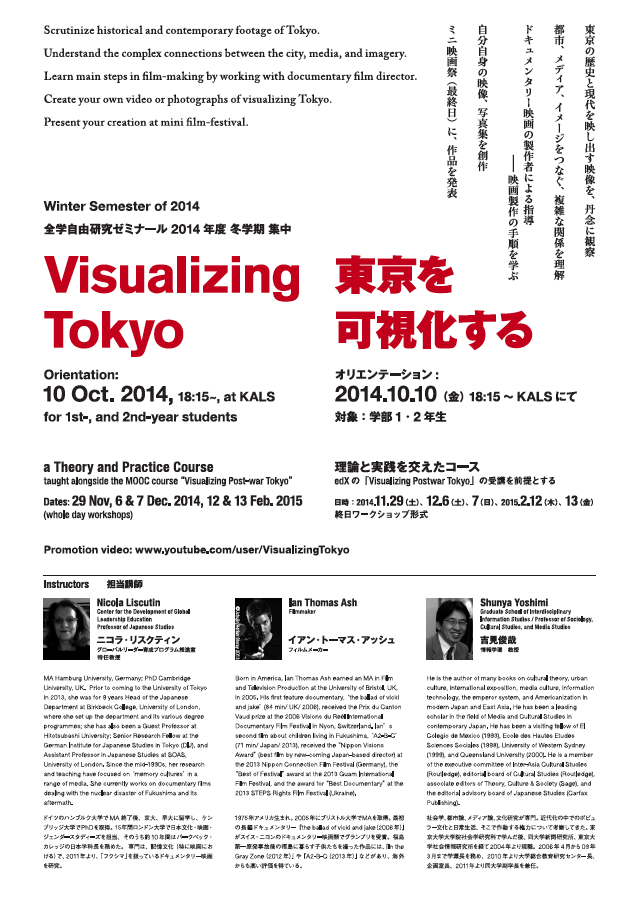 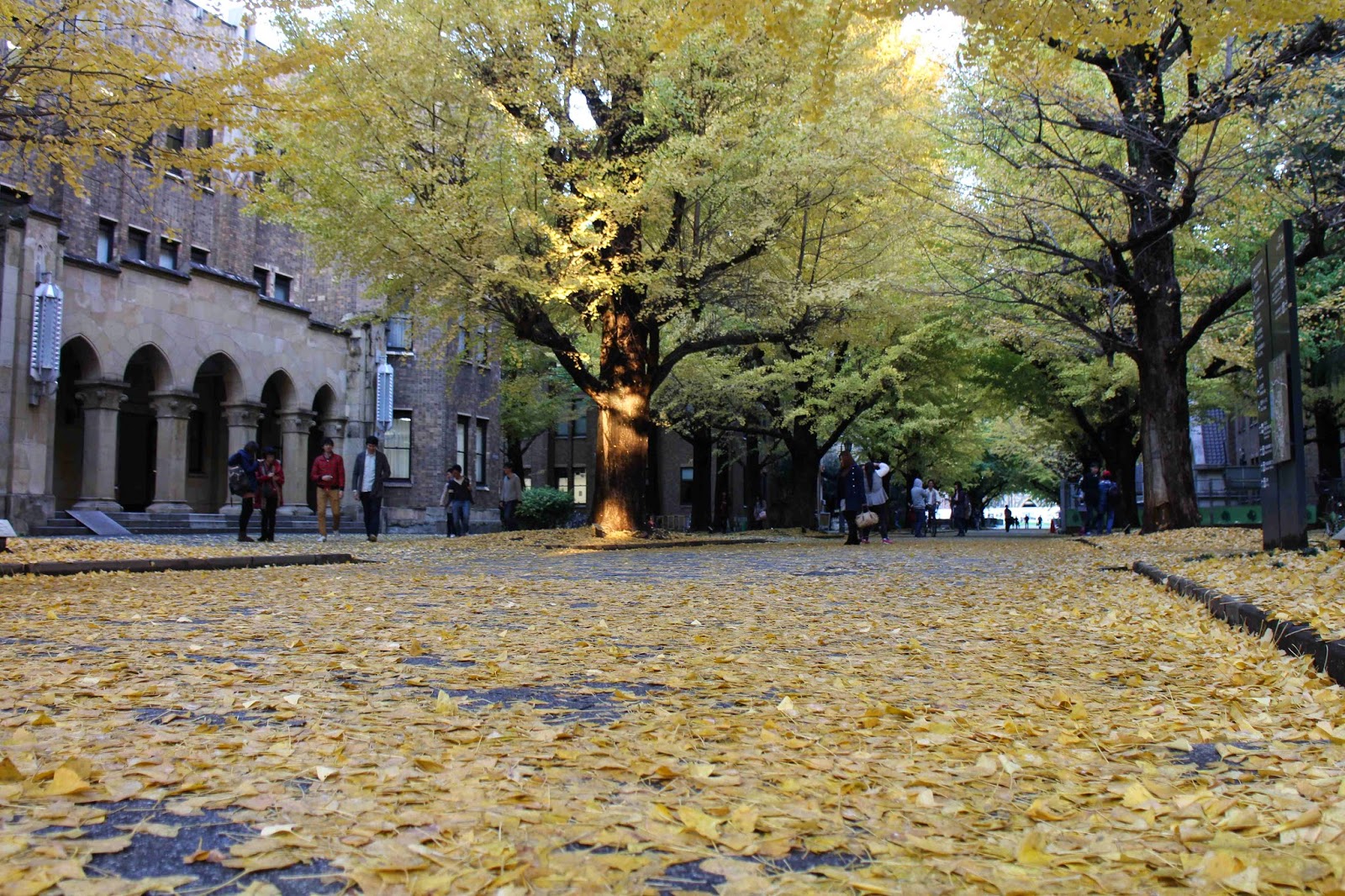 Meanwhile, I am in production for two new films, one that I am filming in Tokyo with a friend, and the other the third installment about people living in Fukushima.  In between screenings and filming, there was a "Special Sneak Preview" of my new film '-1287' (WEBSITE) organized by a local university, a 4am Skype with an audience in Brussels on November 30 (INFO), and I even found time to sneak away into the country side for some rejuvenation in the form of plowing a field with Mt. Fuji in the background and partaking in delicious meals prepared with home-grown vegetables. 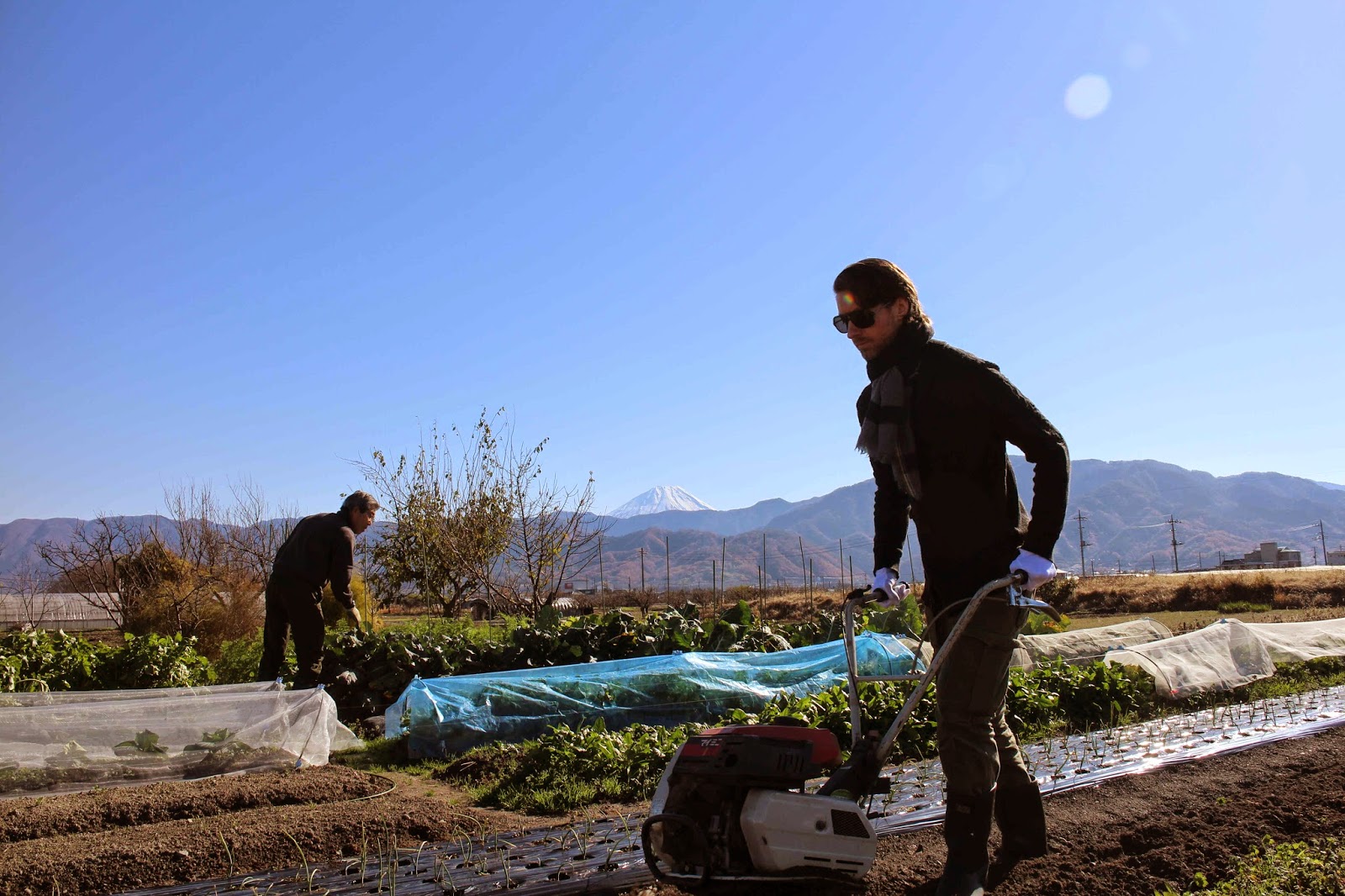 Yesterday, the last piece of my visa puzzle fell into place as I returned to immigration to have a required "special permission" stamped into my passport.  Having been approved just the day before, it was not a day too soon: this morning I am on my way to Jordan where 'A2-B-C' will be screened on December 16 in Amman (INFO).

This has been simply the most incredible year, and I can not fully express with words the gratitude in my thoughts.  May I receive the strength to express it with my deeds. 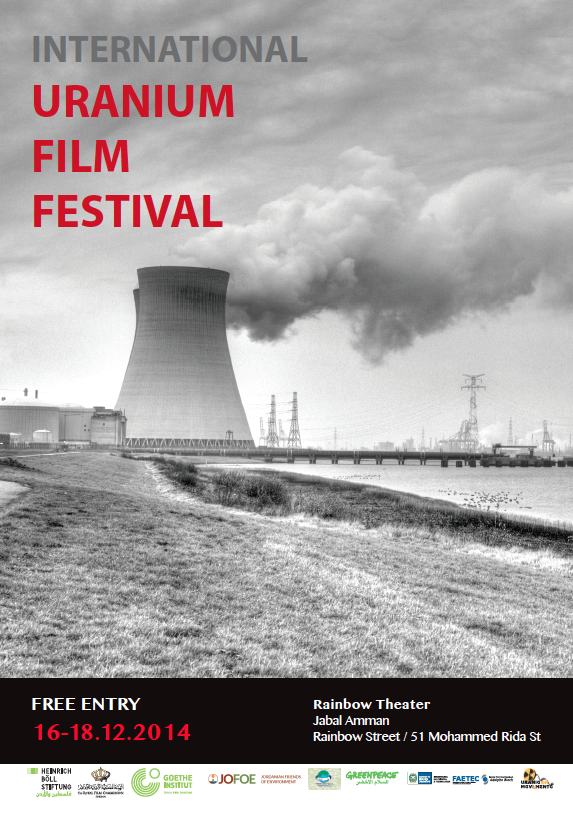 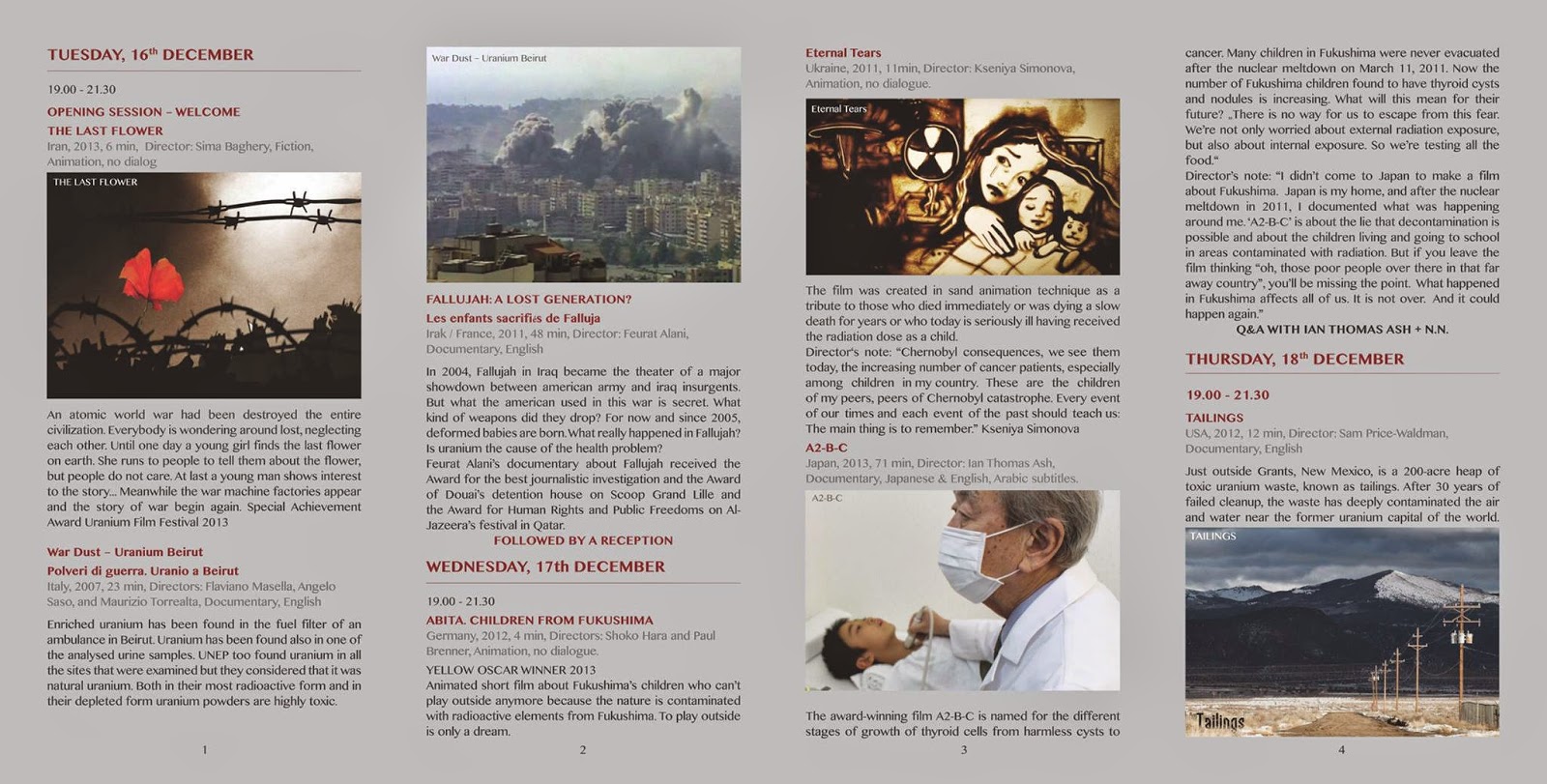