Usually I do not speak much about the films I am working on until after they are completed.

The first draft of this blog began "I do not know why I usually do not speak much about the films I am working on until after they are completed".  But that would not have been true.  I do know why: it is because every time I begin a film, I am afraid I will fail.

Perhaps someday I will write more about how illuminating the process of making this film has been for me (about team dynamics, about being a producer, about perseverance) but for now I will simply say that I am extremely honoured and excited to finally be able to share more details (after THIS brief mention back in October) about my newest documentary, "Suturing Cultures".  It will be premiering world-wide on the NHK World channel on February 6 (or 5, depending on timezone), but don't worry if you don't have NHK World on your TV as you can watch it for FREE on your computer, smartphone or tablet (info HERE)!

At Juntendo University, the oldest medical school in Japan, Dr. Yuko Takeda is preparing young medical students for a career during which they will most likely see foreign patients in addition to Japanese ones. As these future doctors who come from a traditionally homogeneous society navigate issues of culture, religion and sexual orientation in English, the real lesson comes when they realize that what they are being taught is about how to become better doctors. 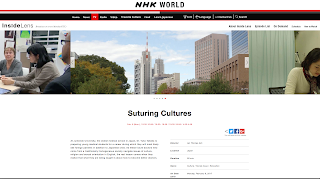 This is the second documentary I have made for the NHK World series "Inside Lens", following last year's "Dying at Home" (INFO).  And while this film, like all of my recent films, also features a strong story line based around issues of health and medicine, the setting this time is not in a hospital or in a patient's home, but rather in Juntendo University, the oldest medical school in Japan.

I feel so fortunate to have been surrounded by an amazing creative team: editor Chris Huang, composer Komitetsu, an amazing NHK producer Yukari Harada (and many others), while working with awesome footage from the camera of Thomas Schlottman, who also shot "Dying at Home".  And it has been a poignant time as well as this also marks the last film on which my assistant, Rei, will be working.  Rei has been my right-hand for the past 18 months, but he is now going off to graduate school, well on his path to becoming a film director in his own right.

We are just a month into 2017, but this has already been one of the busiest times in my life.  And there will be more exciting news in the coming weeks as this was not the only work-in-progress I had waiting in the wings...

Thank you all so very much for your support and encouragement!
Posted by Ian Thomas Ash at 12:28 am