As the 6th anniversary of the March 11, 2011, triple disasters of earthquake, tsunami and nuclear meltdown approaches, I am honoured to be traveling to two Canadian universities to participate in educational events.

I will be screening the work-in-progress of the third feature documentary in my series filmed in Fukushima.  With a working title of "Sezaruwoenai" ("Unavoidable"), it follows my films "In the Grey Zone" (2012) WEBSITE and "A2-B-C" (2013) WEBSITE.  While I do not know yet when the film will be finished and released, I am extremely honoured and grateful for the opportunity to screen "Sezaruwoenai" as a work-in-progress and to be able to both share the interviews in the film with the viewers and to receive feedback and comments of support from them that I can then share with the participants in the film.  I first screened an early cut of the film in Berlin last year at the IPPNW congress organized for the 30th anniversary of Chernobyl and the 5th anniversary of Fukushima (STORY).

Following the screenings in Canada, I will also be sharing statements from two young mothers who are so-called "voluntary evacuees"; that is, they have decided to evacuate from areas in Fukushima not officially under mandatory orders to evacuate.  With the government set to end financial support for such "voluntary evacuees" at the end of this month, these families are facing the painstaking decision of whether or not to return to Fukushima with their children.   More about these "voluntary evacuees" can be found in my post about a press conference for which I served as the MC at the Foreign Correspondents' Club of Japan in January (STORY).

On Wednesday, March 8, I will be presenting at the University of British Columbia at the workshop "The Politics of Invisibility: Fukushima, 6 years after 3.11" which is sponsored by the UBC Center for Japanese Research.  Two years ago, I had the honour of screening my film "A2-B-C" at the same event (STORY). 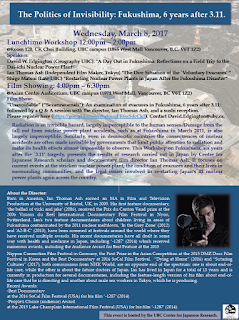 Then on Saturday, March 11, the 6th anniversary of the disasters, I will be presenting at the University of Alberta in Edmonton at an event sponsored by the Prince Takamado Japan Centre for Teaching and Research. 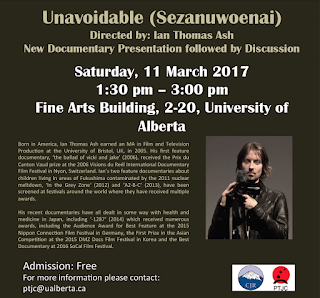 It is an honour to take part in these activities being organized to educate and ensure that the events of March 11, 2011, are not forgotten.