Two years ago, I first began to talk about a film I was making with the working title of "MSM: Men Who Have Sex With Men".  As documentaries often do, the film ended up taking much more time (years!) and much more money (tears!) to complete than any of us had expected.  But I am happy to announce that the film is finally finished!

STORY
Now called 「売買ボーイズ」 (bai-bai boizu) or "Boys for Sale" in English (WEBSITE), the film documents "urisen"- mostly straight, young guys who sell sex to men- in Tokyo's largest gay district.  The trailer, which is NSFW and for which viewer discretion is advised, is here:

I am really looking forward to announcing more screenings in the coming weeks and months and thank you all for sharing about this film with people you think would be interested! 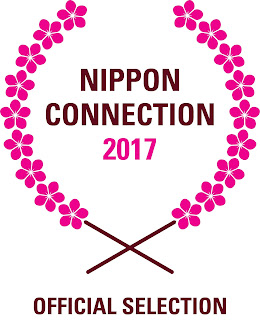 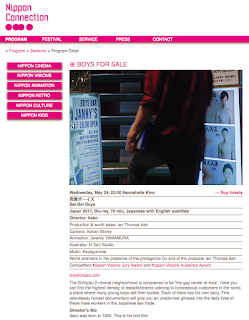 CHANGES
Two years ago when we first began shopping the rough cut around to festivals and friends in the industry, it became clear that the documentary would benefit from undergoing some significant changes.  At the same time, however, I had become busy with work on what would eventually become two commissions for the NHK World documentary series "Inside Lens" (2016's "Dying at Home" INFO and 2017's "Suturing Cultures" INFO***).  Knowing I needed to turn fuller attention to those documentaries, I felt the best decision I could make for "Boys for Sale" was to step down as director, although I remained producer overseeing the completion of the film.

I brought on a new director, Itako, who was in charge of taking apart the original edit, shooting new footage and then putting it all back together.  He also directed the two music composers who created an entirely new and original sound track, as well the illustrator who was commissioned to draw over 300 original illustrations for the documentary (of which about 100 ended up being used in the film).

THE OTHER TEAM MEMBERS
I would like to give a shout out to some of the other "Boys for Sale" team members, for their incredible work:

REFLECTION
"Boys for Sale" is certainly one of the edgiest films I have been a part of, and considering some of the projects I have worked on, that is saying something.  ;)  But in all seriousness, working on this film has been a massively interesting experience, and I have learned so much about group dynamics, about how music and animation can be used in a documentary, and about myself.

*** "Suturing Cultures" will be re-broadcast on May 29 TIME SCHEDULE HERE.
Posted by Ian Thomas Ash at 10:45 am