On Friday, Metropolis magazine published the online version of an article about my documentary career in Japan called "Filmmaking in the Grey Zone: An interview with Ian Thomas Ash" by journalist Andrew Deck (READ HERE). 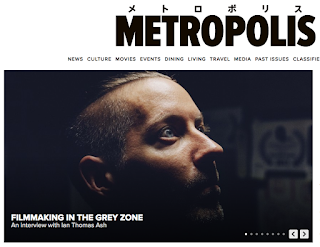 I was surprised by some of the quotes, particularly the ones at the end where I discuss the nationality of my films and my sense of belonging here.  When I read what I had said during the interview, I thought "did I really open myself up that much to a journalist?!" I own that I said those things and it was certainly how I felt at the time.  But it also comes with some a certain sense of sadness that I can not deny that I at least sometimes feel that way.  I just hope that those quotes are understood by readers within the context of the story I was relating about being stopped by four police officers and searched rather aggressively.

Yesterday, I was honoured to be invited to speak about my work at a lecture entitled "Disaster, Trauma and Hope" at Aoyama Gakuin University (AGU). Arranged by AGU professors Marc Menish and Mariko Hori, it was wonderful to present my work alongside filmmaker Keiko Courdy, Butoh dancer Minami Azu, soprano Junko Menish and poet Kageyama Yuri. 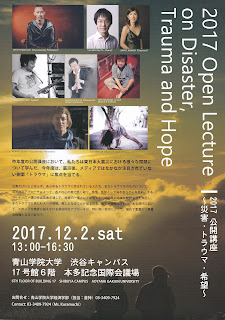 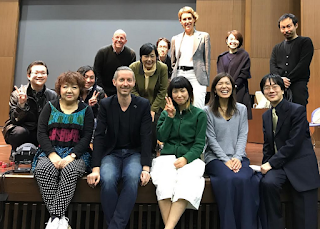 After the lecture, I had a meeting at Las Chicas House, a blast from the past when I used to come down to Tokyo on the weekends when I was still living in Tochigi 17 years ago (!).  As I walked through the lobby, an array of magazines was on display- including the December issue of Metropolis which I had yet to see. 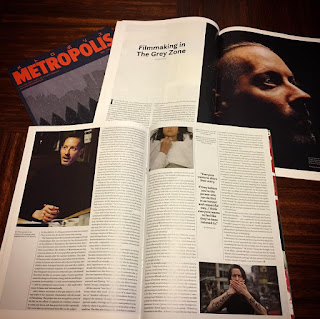 Sitting in a place which held so many memories from when I had first come to Japan and with Christmas music tinged with a nostalgia from what seems like another lifetime wafting through the air, I realized the feelings that had boiled up inside me of during the interview had not yet cooled; they are simply gentlly simmering away on the back burner.
Posted by Ian Thomas Ash at 2:23 pm