Extremely honoured by the coverage of my documentary Ushiku in the newest episode of the NHK WORLD-JAPAN program J-FLICKS. 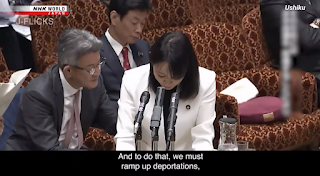 I was grateful that an entire 6-minute segment was dedicated to the film, and was particularly humbled by the following exchange:
Host Sarah Macdonald: "I've said it before, I'll say it again: Nippon Connection - Japanese Film Festival has a special place in my heart. Now of the films screened this year, I think Ushiku was particularly impactful, a really harrowing film. What did you think of it?"
Filmmaker and commentator John Williams: "I think Ushiku is probably one of the most important films that's been made in Japan in the last decade or so. And... I would like everybody to see this. It seems that people just have no idea what's going on in these detention centers in Japan and the way that asylum seekers and refugees are treated here in a really appalling and inhumane way. "
And I was utterly floored that NHK World (the international broadcast service of NHK, Japan’s public broadcaster) aired so much of the footage I filmed and obtained from inside the detention center in Ushiku. Using tax dollars to expose the government's systematic violation of human rights is exactly what a public broadcaster should be doing.
The episode aired four times on August 21st and 22nd and can now be viewed for FREE until September 4 On Demand here: https://www3.nhk.or.jp/.../en/special/episode/202108210910/ The segment about Ushiku begins 28 minutes into the broadcast.
Our mission in making this film and the accompanying Impact Campaign is to create widespread domestic and international awareness of the immigration injustices occurring in Japan and to help works toward an immigration system in Japan where all refugees are recognised through a just, timely, and transparent process.
Posted by Ian Thomas Ash at 11:30 pm