Over the past five months, I have received such wonderful support from so many people around the world. They have thanked me for the work I have been doing to document the situation here in Japan and have encouraged me to keep working. Recently it has occurred to me that I haven't had much time to talk about some of the other people on our team who have made this film possible, so I would like to briefly introduce just a few of them here.

Colin O'Neill is my cameraman and producer. On my YouTube channel, he is the guy I am talking to in all of the "Children of Minamisoma" videos. In April, one month after the nuclear meltdown and explosion when so many foreigners evacuated from Japan, Colin got on a plane from the UK and came here. Not only did he come here, he traveled with me into the 30 km radiation zone to document what was happening to the children living there. Colin is my filmmaking partner, working as an adviser on my first film ("the ballad") and shooting/ exec producing our second film ("Jake").

Ed Ison is a producer and editor in the UK. He will be grading/ colouring/ onlining the film. (Basically this means that he will be giving our film its "look" and fixing all of the mistakes we made during filming). Typically, an online editor would be brought in after the film was already edited, but Ed is also a friend and adviser and has been part of the filmmaking process all along, giving advice on everything from technical issues to story points. Ed was also the online editor for our film "Jake".

Saito Yuuji is a bilingual customer service representative for an American company in Tokyo by day and an assistant producer by night and weekend. Saito-kun has worked with Colin and me since the beginning of this film. He has done everything from arranging the cars we used during production, to mapping out what roads we should use to avoid as much as possible driving near the nuclear plants when going up north. He created an emergency plan for us that included contact information for hospitals that were still open in the zone in case we got hurt and the center where we could go to get monitored for radiation exposure. We spoke to him every night we when we were in the zone and he worked from Tokyo to arrange and research everything we needed. During post-production, he has been a consultant on the English subtitles.

Katsuyoshi Ueno is a photographer and graphic designer in Tokyo. During the months following the earthquake and tsunami, Ueno-san was a prolific Tweeter of news and stories relating to issues dealing with the nuclear crises. The information he gathered was so good, that even the journalists were following his work. I was fortunate enough to be contacted by him and he not only educated me, but also inspired me to keep working. Ueno-san was the FIRST person to see the rough cut of my film and gave me invaluable advice on how to proceed.

Joseph Tame is a UK expat and celebrity blogger/ Tweeter here in Tokyo. He is a crazy, funny and intelligent tech guru. Honestly, his life should be my next documentary. Between flying off to Paris to present at tech conferences, live-streaming the Tokyo marathon WHILE running it (!) and getting stuck in a bidding war for his services, Joseph has advised me at key stages throughout this film. Two days ago he honoured me by watching the rough cut of my film and giving me the tough advice I needed. I am also indebted to Joseph for helping me out numerous times before, including filming the Q and A after the exhibition of my film "the ballad" here in Tokyo as well creating the website for my film "Jake".

And our team continues to grow!

Jay Horinouchi is an artist and coordinator for volunteers going to the devastated areas up north. I met with him yesterday and have asked him to animate the opening sequence of our documentary. He will be watching the rough cut next week, after which he will make a decision. You can view some of Jay's animation and commercial work here.

Finally, thank you all, dear readers, for your continued support and encouragement!

I would like to leave you with this video on the people that are still homeless after the tsunami. It is from the BBC and was brought to my attention my Joseph.

Five months later, there is still much to be done. 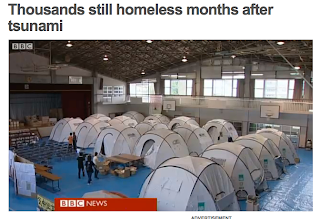