I first met Mrs. Sugano (mother to son Koutatou, 9, daughter Kae, 5, and son Shinjirou, 4) when I came to Fuksushima a couple of weeks ago.  Mrs. Sugano told me that the grounds and surrounding area of Oguni Elementary School in Date City, Fukushima, where her son Koutaro is attending, had been found to contain radioactive hotspots. 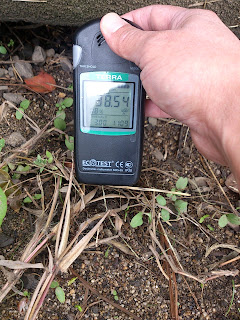 Mrs. Sugano spoke with the Vice Principal of Oguni Elementary School about the radiation level, but he insisted that the school had been "decontaminated" and that any hotspots were "outside of school property".  She insisted that the hotspots do pose a threat to the children, since they must walk by them on their way to school.  Despite her objections, the school subsequently decided to reinstate outdoor athletic classes.  Mrs. Sugano expressed her concern that when the wind blows, contaminated dirt from neighboring properties is blown onto the school's field, a field which the administration claims has been "decontaminated".  The vice principal agreed only to "limit outdoor activities on days when the wind is strong".

Meanwhile, Mrs. Sugano contacted her local assemblyman, Mr. Kanno, for help.  He agreed that although the school classrooms had been "decontaminated", the children do not spend their entire day inside the classrooms, and that the whole school AND the surrounding area needed to be decontaminated.

This morning, Assemblyman Kanno and some of his colleagues gathered to measure the radiation levels at and around Oguni Elementary School, and with his permission, Mrs. Sugano and I went along to document their confirmation of the radioactive hotspots.  The weather was nice, but it was cool and quite windy. 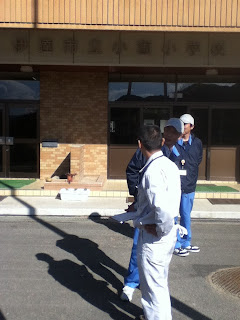 We arrived at the appointed time and were told by the monitoring team that Assemblyman Kanno was inside the school meeting with the Principal, so I began filming outside.  Just as I was interviewing Mrs. Kanno about why we were there, the children filed outside onto the field, without face masks, and began physical education class.  Mrs. Sugano was shocked: despite the Vice Principal's promise to limit such activities on days when it is windy, the children were playing outside (and ironically in front of radiation monitoring posts). 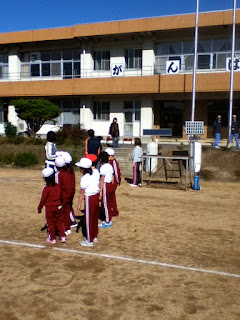 The Vice Principal suddenly appeared and demanded to know what I was doing.  I explained that Assemblyman Kanno was inside speaking with the Principal, but he kept demanding to know who I was and who I was working for.  I calmly gave him my name, said that I am a freelance filmmaker from Tokyo and repeated that Assemblyman Kanno was inside explaining why we were there to the Principal.  When the Vice Principal accused me of trespassing and that this was "a big problem", a switch in me flipped, and I screamed "which is the bigger problem, me trespassing in order to document radioactive hotspots threatening the children, or the radioactive hotspots themselves?!"

He had the gall to say, "You trespassing."

I don't remember everything that happened next (but it's all on film).  Apparently Assemblyman Kanno came running out when he heard the screaming match between me and the Vice Principal.  Mrs. Sugano and I were escorted off of school property, and Assemblyman Kanno became cross with me for showing emotion and losing my temper (a huge transgression in Japan) and forbade me to continue filming.

By the time Mrs. Sugano and I got to the car, I was convinced the school was calling the police and that I would be arrested for trespassing.  I switched the memory cards in my camera and kept them where I could pass them to Mrs. Sugano quickly if the police came.

I apologized to Mrs. Sugano for causing trouble, but she thanked me for caring so much that I had showed emotion.  Later, Assemblyman Kanno called to say that he and his team had confirmed the existence of the radioactive hotspots around the school and said that although it may take a little time, he is going to take action.  And without me even asking, Assemblyman Kanno gave me permission to use all of the footage I had taken.

But it's not a happy ending.  The children continue to attend Oguni Elementary School surrounded by radioactive hotspots.

I don't blame you for getting emotional. Especially after all this time -- seeing it happen and spending so much time with the footage.

I'd say your quite deserving of some relaxing time with your cooking and giant yams. hehe

Oh I forgot to say, the kid at the very bottom, he's so adorable! But at the same time, seeing that little badge... he shouldn't have to worry about that.

Thank you so much for your comments. I was quite upset with myself for not being able to control my emotions. I try not to become personal involved in the stories I am filming, but it is impossible. I am human and I DO care about it happening.

The boy at the bottom is Mrs. Sugano's son, Koutaro (I just added a caption to the photo- thanks for pointing out I had forgotten to add that). I do worry about the children's future so much. Am I worrying for nothing? Only time will tell.

Maybe Assemblyman Kanno had to appear to disapprove of what you'd said in front of the Vice Principle. I don't know exactly how it happened, but it would explain why he later gave you permission (unprompted) to use all of the film.

PS. Did you get a photo or a still of the geiger counter reading 4uSv/h 1m above the hotspot? It would definitely be worth publishing if you did.

Thank you for your comments. I believe Assemblyman Kanno really does support the efforts to protect the children. I think he was right that I shouldn't have let my emotions get a hold of me, but I also think he understands that my emotions come from a good place- that I am concerned about the conditions at the school.

There is footage of the radiation readings: 4uSv/h 1m and 36uSv/h 0m (!). Once I get into the editing, I will be sure to include that in the trailer for the new film. I can also make stills from the footage if needed. Stills are harder since they really need to be a close-up of the reading AND the school in the background to clearly show where the hotspot is. In the film footage, though, it is painfully clear.