The atomic bomb was dropped on the city of Hiroshima 69 years ago today at 8:15 in the morning.

Today, activist and second-generation Hiroshima hibakusha, victim of radiation exposure, Mr. Kaneoka, planned two screenings of my film, 'A2-B-C' (WEBSITE).  Mr. Kaneoka, 66 years old, was born in Hiroshima just three years after bombing, to a father who is a hibakusha.  Since his days as a student activist when films were all on 35mm, Mr. Kaneoka (in PHOTO below) has planned private screenings of films about political/ world issues and brought them to people living in small towns without proper cinemas.  His mission has been to not only give people living outside of large cities the opportunity to see these films but also to come together and discuss the issues brought up in the films during talk sessions following the screenings.

The two screenings today were in the Saitama Prefecture cities of Yanasegawa and Shiki, and I was invited to attend and talk part in the post-screening discussions. 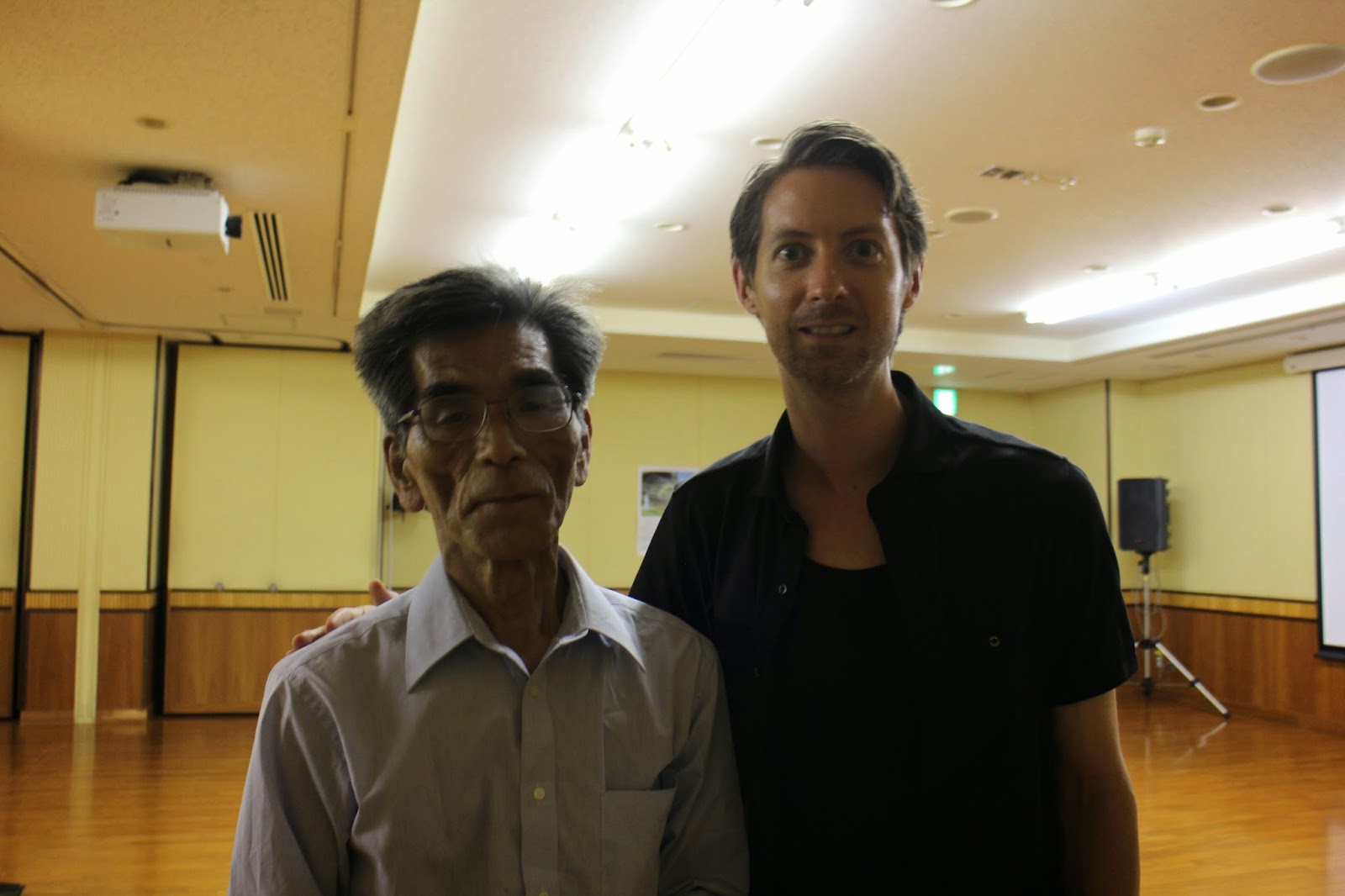 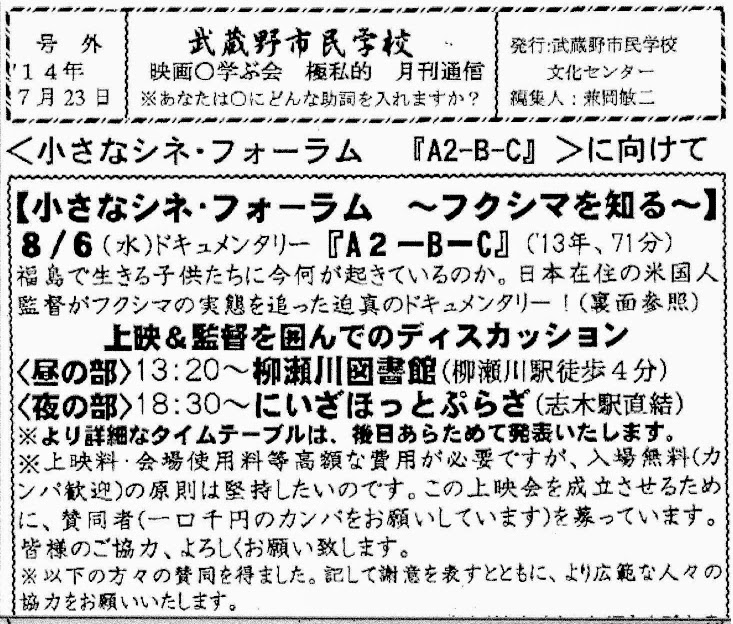 During the first screening in Yanasegawa, Mr. Idogawa, the former mayor of Futaba, was in attendance, and it was an honour to finally have the opportunity to meet this brave man.  After the nuclear meltdown, Mayor Idogawa was the only mayor to evacuate completely his town prior to receiving direction from the national government, and his tireless efforts to protect his townspeople have been documented in several films, including the documentary "Nuclear Nation" (directed by Atsushi Funshashi, whom I meet from time to time at places such as THIS).

Mayor Idogawa has recently received severe criticism for speaking out about health problems he attributes to radiation exposure, including severe nosebleeds (something about which the mothers in my film also talk).  To the ire of the government, he has even posted pictures of his bloody noses on the internet (Mainichi news article HERE).  As he knows infinitely more about the issues brought up in my film than I do, during the post-screening Q&A, I asked Mayor Idogawa (far left in PHOTO below) to share some of his experiences and knowledge with those in attendance. 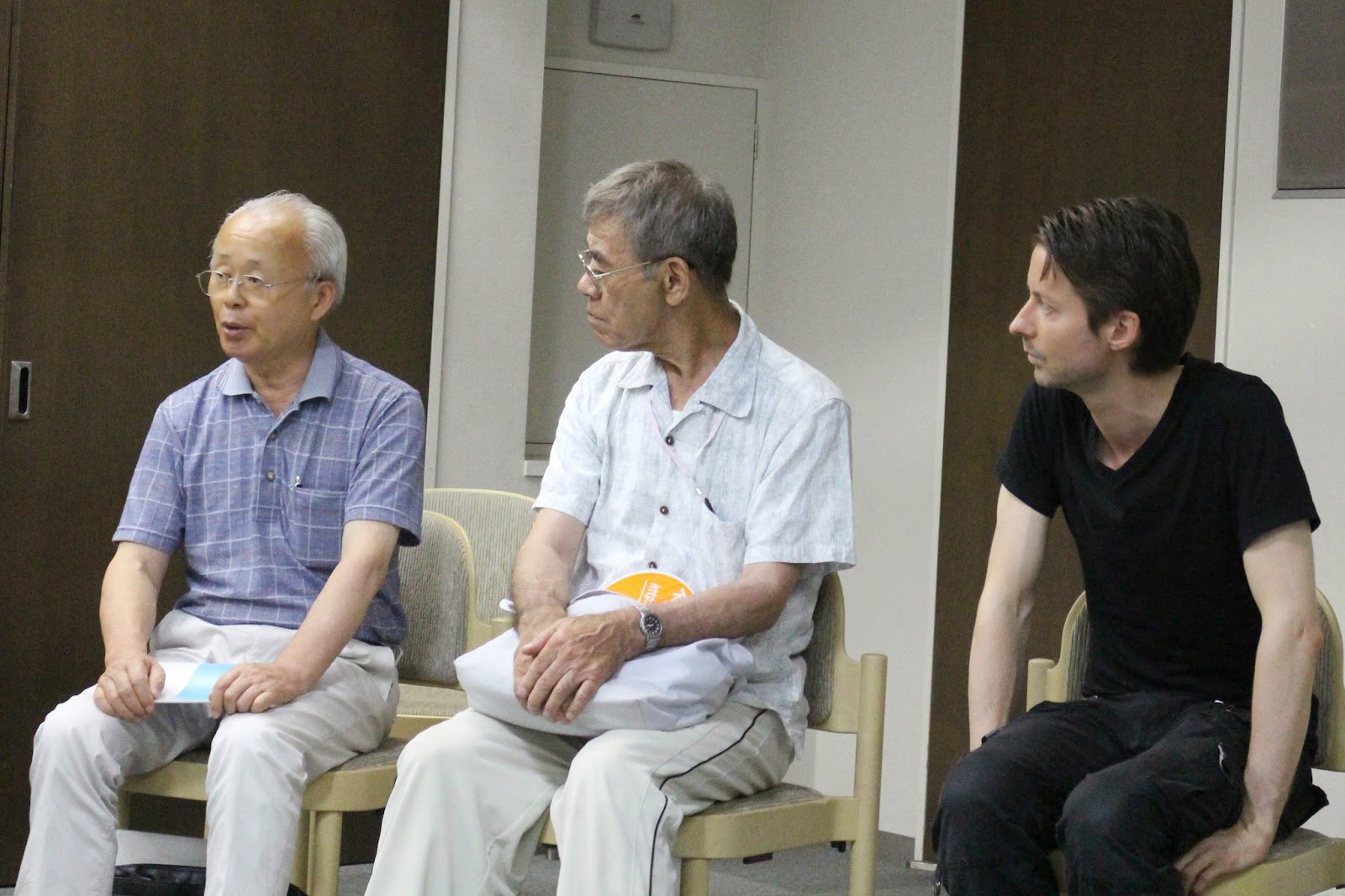 A note of special gratitude to documentary filmmaker Satomi Horikiri (in PHOTO below) whose own work also documents Mayor Idogawa's efforts.  Not only did she invite him to today's screening, but she also generously took the photos in this blog entry. 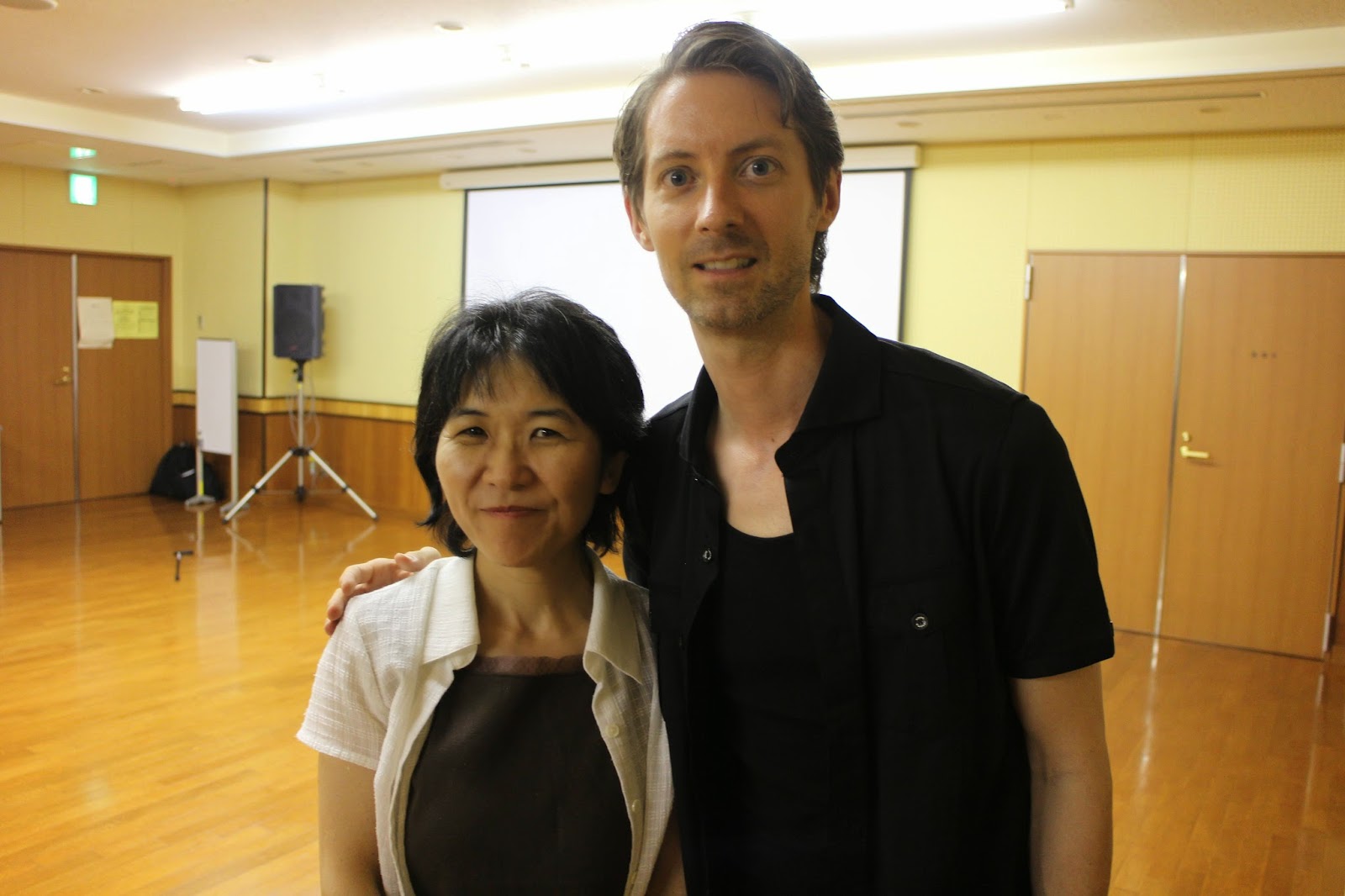 Especially considering the locations and the small population of the towns where the two screenings were held, the attendance was great, and at the end of the day Mr. Kaneoka was extremely pleased to report that over 120 people had participated in the events. 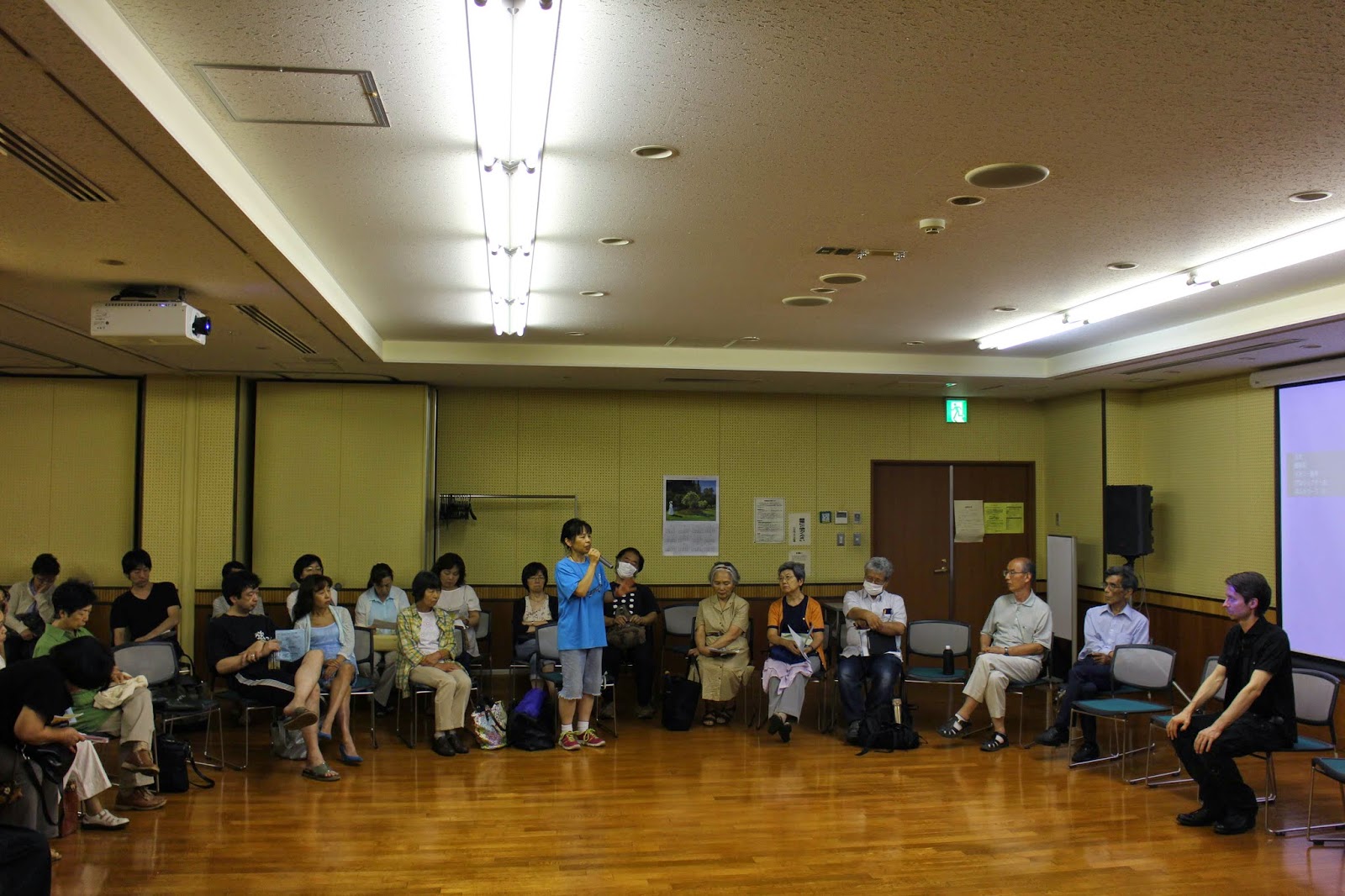 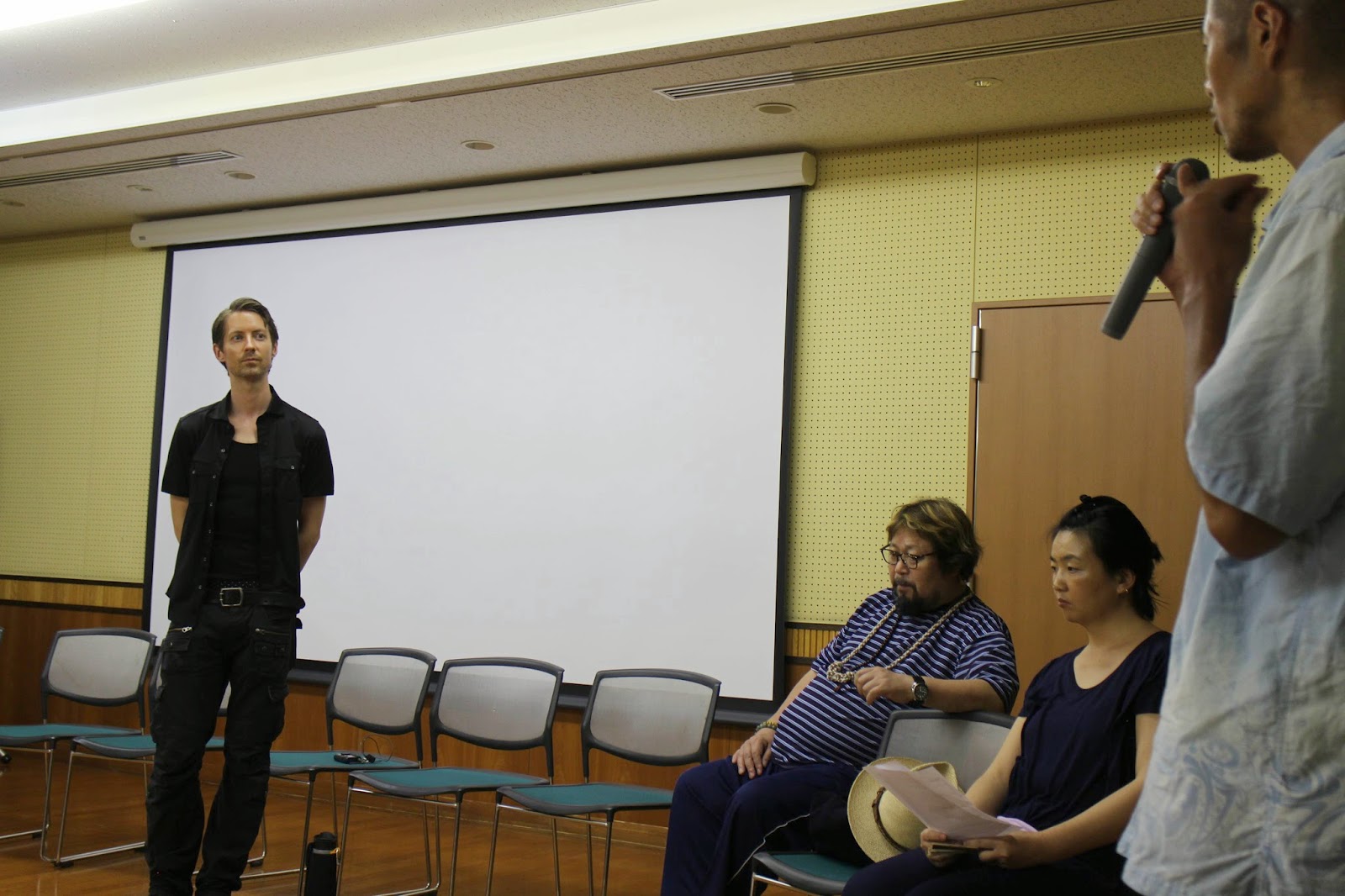 Hiroshima Day 2014: a time to reflect, to share and to never forget about hibakusha, the victims of radiation exposure.
Posted by Ian Thomas Ash at 11:30 pm