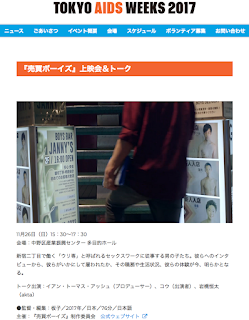 On behalf of Itako, the director of the film and Adrian "Uchujin" Storey, the DOP/ producer, we are so grateful for this opportunity to screen for an audience in Japan at an event which is free, open to the public and dedicated to a topic so important that it was one of the original inspirations for us to make the film.
Posted by Ian Thomas Ash at 10:54 pm