"No safety limit for radioactivity...only different levels of acceptable risk."

Nearly 6 months on, there are many questions left answered, and still so many questions yet to be asked.
"David Boilley of ACRO: The Zone", Katuyoshi Ueno's interview with David Boilley, a nuclear physicist and the chairman of ACRO (a French NGO with a nuclear testing laboratory) that was published yesterday by Papersky, begins to ask some of those questions.

For example, when he is asked about the Japanese government's 20 millisievert limit for radiation exposure for the people of Fukushima (this is the same limit as that for a nuclear worker), Boilley points out that there is a difference between what would be considered "normal" exposure to radiation and what is "realistic" under the current circumstances. While admitting that an 80 km exclusion zone would be necessary to stay within the internationally accepted limit of 1 millisievert, he also notes that this would simply not be possible.

The problem, he states, is that "1 millisievert is not achievable. 20 millisieverts is too high." The readers (along with Ueno-san) have already come to this same conclusion on their own and are perhaps looking for a more concrete solution. Unfortunately, Boilley simply ends his answer by quipping that "fortunately, I'm not a politician who has to make such a decision." Gee, Boilley, thanks for the help in figuring out this problem.

Ueno's questions address so many of the issues we are grappling with on a daily basis: from the affect the release of contaminated water into the ocean will have on marine life and how the radiation may affect the rest of the food supply to how the issues of radiation hot spots affect the people of Tokyo.

This article is essential reading. 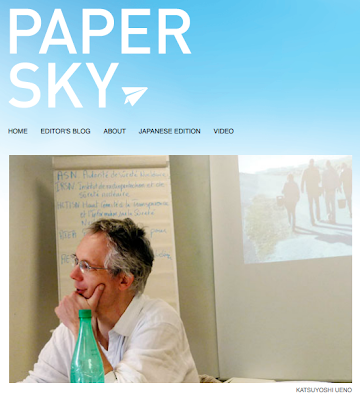 (disclosure: Katsuyoshi Ueno is my personal friend and colleague.)
Posted by Ian Thomas Ash at 1:11 pm