I have been enjoying Twitter in a way I could never have imagined. It doesn't have to be the banal chatter that some people associate with it. In fact, it can be quite the opposite. The group of people that I am following have been such a great resource on news events and current topics, as well as a source of encouragement for my work.

Through Twitter, I have recently been introduced to a couple of films. Last night I watched "Blind", a beautifully photographed and produced short fiction film directed by Yukihiro Shoda. It has been made available online by its director, and the film's Vimeo page (here) describes it like this:

The film is set in post-nuclear Tokyo in a dimension not so distant from ours. Young salary-man's morning commute takes a surreal turn.

This 5-minute film will have you thinking for ages. (Coincidentally, the film's climax takes place in front of Taro Okamoto's mural "Myth of Tomorrow" which I blogged about yesterday.) Click on the still below to watch: 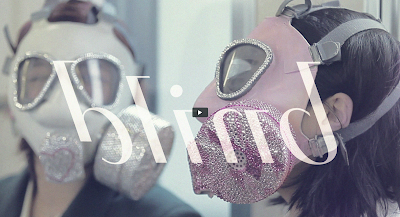 (Added Sep 7: Thank you to V, who blogs at Distant Land here, for bringing to my attention this great interview with the director and producer of "Blind" that was published by Time Out Tokyo. Interview here.)
@ikrockhopper tweeted awhile back about the short documentary film "Chernobyl Heart" (2003/ 40 minutes/ produced by HBO films) which won the 2004 Academy Award for best short documentary. The film, by director Maryann DeLeo, had a cinema release here in Japan last month. This documentary follows the director as she meets parents and children affected by the Chernobyl disaster years after the accident. "Chernobyl Heart" left me with more questions than answers, but I recommend seeing it... if only to be reminded that there is always another part of a story to be revealed. Here is part 1 (parts 2 and 3 can be found on the page to which you will be forwarded).
(Note: I have a problem with films being made available online by people other than the author so I am torn when it comes to linking to videos that may be in copyright violation. But with tens of thousands of views, I can only assume the copyright holder is aware of this upload and has chosen not to take action.)
Posted by Ian Thomas Ash at 5:44 am

Another one is Batrleship Yamato