The European Premier of my doc "In the Grey Zone" (website) was held tonight at the Camera Japan Festival (website) in Rotterdam, Holland.  I was scheduled to be there for the screening and the Q & A to follow, but unfortunately due to extenuating circumstances I was unable to attend. 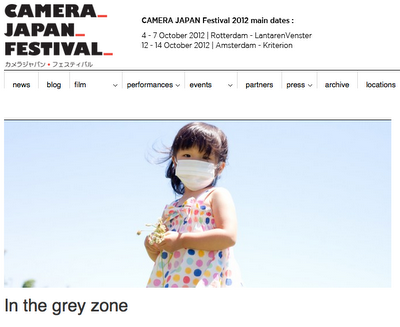 I also really wanted to be there because my films are like my children, and sending them off to a festival without me there feels like sending my kid off to school for the first time.  Will she make it to class on time (= will the master copy make it to the cinema)?  What if nobody sits with her at lunch (= what if nobody comes to the screening)?  What if the other kids are mean to her (= what if the critics hate it)?

I also didn't want to disappoint the the festival organizers and the audience.  For festivals, having a director present for a post-screening discussion can be a big draw for audiences.  When I attend a festival, I will usually choose a screening where the director is in attendance because the opportunity to hear them speak and to ask them questions isn't something you usually have the chance to do.

But this story has a happy ending (quite unlike most of my films).  Through the power of the internet (and the great technicians in Rotterdam) I was able to take part in the Q & A  following the screening via Skype from my Tokyo studio!

Click HERE to read what TheHagueOnline.com wrote about "In the Grey Zone" when it was chosen as one of the Top Picks of Camera Japan!