Mr. Shibuya and I went to Fukushima City Hall today for the City Council meeting at which the issue of using locally-grown rice in the mandatory school lunches was on the agenda.

Last week, Mr. Shibuya called the City Hall to confirm the room in which the meeting would be held, where in the agenda the discussion of the use of local rice in school lunches was scheduled, and the process for which members of the public would be allowed to attend the meeting.  He was told that members of the public could attend the meeting after registering their name and address and that anyone, including people from out of town (like me), could attend.  He was told that the school lunch issue would be discussed in the afternoon session and so we should come after lunch. 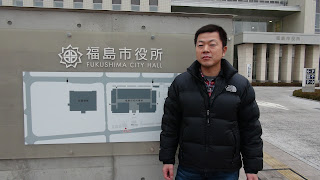 Meanwhile, several citizen's groups who oppose the use of local rice in school lunches were sending out mass e-mailings to their members to encourage members of the public to attend the meeting.  Among the city council members there are few who oppose the use of locally grown rice in school lunches, but one is a young City Councilman* named Mr. Oouchi (also spelled "Ouchi").  Mr. Shibuya hoped that we would be able to talk with him after the meeting.

When we arrived at City Hall, the meeting room was dark and no one was around.  We were still a bit early for the afternoon session, so we were about to head back downstairs when a sign on the door of the meeting room caught my eye.  It was about the use of cameras during the session, and Mr. Shibuya and I headed back toward the room to read it.  As we did, a young man stopped us and asked if we were there for the meeting.  He then told us the agenda had been changed suddenly and that the issue of using local rice in mandatory school lunches had been discussed in the morning and that the meeting had already been adjourned for the day.

The man was Councilman Oochi.

I asked him if he would give me his comments on record about the meeting, why he felt the agenda had been changed, and more importantly, why the city was pushing so hard to use locally grown rice in the children's schools lunches.

Mr. Oouchi immediately escorted us to a private meeting room and granted us a interview which lasted for 25 minutes!

*Due to a translating error, I referred to Councilman Oouchi as "Assemblyman Oouchi" in some of my tweets during the day. 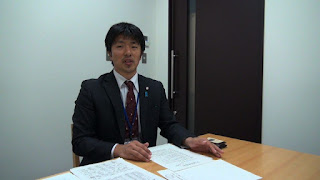 Mr. Oouchi asserts that the City Council intentionally changed the order of the agenda, discussed the issue in the morning and adjourned the meeting in an attempt to curb public attendance.

Mr. Shibuya's presence at the interview gave it a kind of depth that otherwise would not have been there.  Rather than just having me as an "outsider" asking Councilman Oouchi questions, Mr. Shibuya was asking him questions as a resident of the city and a parent of two children attending city schools.  In the morning I never could have predicted that I would have been able to film such an important interaction.

When I asked him why the city was so keen on using local rice in the children's school lunches, Councilman Oouchi's answer was simple:  the contract represents 250 tonnes of rice per year.  It all comes down to money.

Mr. Shibuya and I headed for his home.  I think we were both filled with a kind of melancholy mixed with some small satisfaction.  We felt like we had been tricked, duped into believing that we could witness the local government at work by attending the public meeting, and were feeling weak for having been so easily defeated.  And yet it was the move by the assembly to change the agenda and effectively shut out the public which provided us with the opportunity to film a private meeting with Councilman Oouchi.

When we arrived at Mr. Shibuya's house, his son Ayumi, 12, and daughter Mutsuki, 9, were just arriving home from school.  We had cake with the children, joined by Mr. Shibuya's wife and the children's grandparents.  The children did their homework and the adults talked, everyone sitting on the floor with their legs under the same low heated table, called a "kotatsu".  Family.

The Shibuya's home is decorated for Christmas, and it is warm and welcoming and filled with joy.  Family. 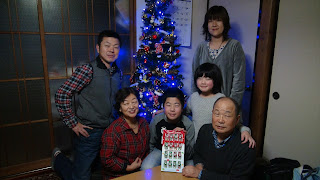 On their Christmas tree is an origami paper crane, a symbol of happiness.  It serves to remind me of why I am in Fukushima doing this work.  This is about families, like the Shibuya's, who have hopes and dreams for the future happiness of their children.  Family. 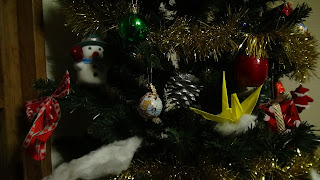